Well, I think we made the most of our only full day in Florence! We had the day pretty well mapped out because we knew we were going to be going to a few different places in different areas of the city. Okay, so we may have also planned around the place we wanted to go for lunch, but that’s beside the point. 🙂

We started off in Piazza Santa Croce, which was a pretty easy walk. Like many piazzas, it’s home to shops, restaurants, and lots of people. This one is also home to an important church, the Basilica of Santa Croce, which is not only an amazing building, but is also the home of the tombs of people like Galileo and Michelangelo. Although it’s a bit expensive to get into for a church (€6 as of Sep 2013), it’s worth seeing. Given how much of Michelangelo’s work can be seen in Florence and other parts of the world, it’s pretty incredible to see his final resting place in front of you.

After Santa Croce, we made a quick stop back at Piazza della Signoria to snap a few more pictures of the sculptures there, namely The Rape of the Sabine Women, one of the most famous sculptures there. We also made another quick stop (more of a pass-through, really) at Piazza Santa Trinita.

Our lunch spot was at Quattro Leoni, which was recommended to us by a few different people. Scott had a hankerin’ for some fresh pasta and this place delivered! We had some great bruschetta as well as two different pasta dishes and everything was great. We talked about trying to make our own pasta sometime, so we’ll see how that goes. 🙂

After lunch, we headed towards our major target for today – the Piazzale Michelangelo, which is on the other side of the river from our apartment. It’s situated at the top of a hill, which meant more stair-climbing! Take note that it’s kind of a steep climb and there is no handrail to hold on to, so if that doesn’t sound doable for you, just skip it. The views you get from the top are pretty spectacular though. Since it’s at the top of a hill and on the opposite side of the river, you get some great vistas of the city and of the hills beyond the city.

Check out the photos below!

A shot of the Piazza Santa Croce with the cathedral at the back.

Close-up of the Basilica of Santa Croce.

The piazza as seen from the steps of the basilica. 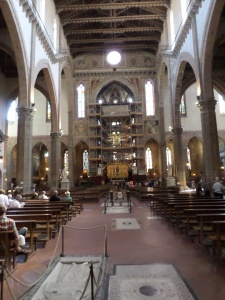 Looking towards the main altar of Santa Croce. 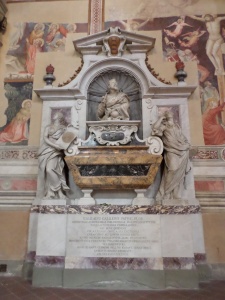 The tomb of Galileo. 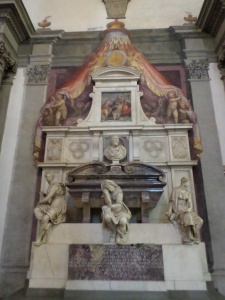 The tomb of Michelangelo.

The Rape of the Sabine Women in Piazza della Signoria.

The Column of Justice in Piazza Santa Trinita. 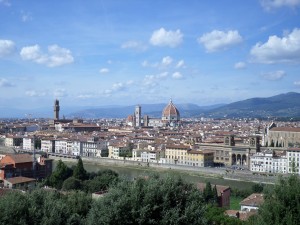 View of Florence from Piazzale Michelangelo. Totally worth the climb!

Me and Scott with the city of Florence behind us.

One of my favorite panoramas!

And that is, more or less, all she wrote for Florence! We’re still here until Monday afternoon, but with our full-day trip to Pisa and the Cinque Terre tomorrow, we won’t really have time to see anything else here. I’ve been watching the weather forecast for tomorrow and it unfortunately hasn’t gotten any better – it’s supposed to be stormy in both locations (worse in Pisa though). We haven’t gotten any communication from the tour company, so we’re assuming everything is still a go. Cross your fingers that the rain only happens while we’re traveling so we can at least enjoy the sights in both places.

One thought on “Florence – Day Two”