Okay, the title of this post is slightly misleading because I’m writing it about our first FULL day in London (rather than our actual first day, which was really more of an afternoon/evening), but whatever. 🙂

Our first full day in London was fun, despite the nearly-constant rain we experienced. However, that’s just part of the London experience, as anyone who has been here can attest to. Travel tip – when you’re in London (or most anywhere in the United Kingdom, for that matter), keep an umbrella with you at all times. Even if it’s sunny, gorgeous, and there’s no chance of rain, bring one anyway. You never know when the rain will creep up! Unfortunately, my umbrella was stolen while we were visiting the Cinque Terre, but vendors are constantly hawking them in London, so it was easy (and cheap) to find a replacement.

Weather aside, we actually didn’t see a ton of stuff on this first day. My friend Matt came up from Brighton to spend the day with Scott and I, which was great. We knew we wanted to do some touristy stuff for our first couple of days because we bought a two-day London Pass. Again, I don’t always advocate for these kinds of passes, but this one covers a bunch of stuff, some of which are pretty expensive (like Westminster Abbey at £18 and the Churchill War Rooms at £17), so it was totally worth it for us since Scott had never been to London before and a lot of the heavy-hitting attractions are covered by the card. Remember what I always say though – do your research! If you’ve never visited London before, it’s likely worth it for you to get the card, but there are other things to consider, like how long you want to use it for (it comes in multiple increments) and whether or not you want to include the transportation option along with it (we both have Oyster cards, so we didn’t need to include transportation).

As it turns out, neither Matt nor Scott had been to the Churchill War Rooms before, so we decided to go there first. It really is a cool museum – you get to walk through the Cabinet War Rooms that Winston Churchill and other members of the British government used during World War 2. Woven into the rooms is also a museum about Churchill the man, including information about both the role he played in WW2 and his life before and after that. If you’re into history, especially military history, this museum is a great choice.

Our second (and, as it turned out, final) stop for the day was at the Museum of London. None of us had been there before (well, Matt actually had been once, but he didn’t remember it :)) and they currently have a great Radio Times exhibition that Matt and I were interested in, so we figured it would be worth the trip. And as a nice bonus, entry is free! Travel tip – it’s often (but not always) free to get into museums, but take note that special exhibitions may charge a separate entrance fee. Just check when you arrive and you can find that out easily. This museum was interesting and had some great information about the history of London. I thought the section about World War 2 and the blitz was really fascinating – the museum has a lot of great artifacts from that era. And the Radio Times exhibition was fun too, though it was far smaller than we anticipated. Of course, Matt and I were most excited about the Doctor Who content in it, which includes a dalek! Check this museum out if you want to know more about the history of London (which you should – it’s a great city!).

I didn’t take as many photos of this day as normal due to the rain, but check out the ones I did take below:

The entrance to the Churchill War Rooms. 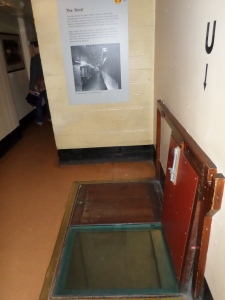 Although it’s blocked off, that leads down to the dormitory level of the War Rooms.

This door was made to look like the entrance to a bathroom, but the room behind it actually housed the transatlantic phone that Churchill used.

Matt outside the entrance to the Museum of London. 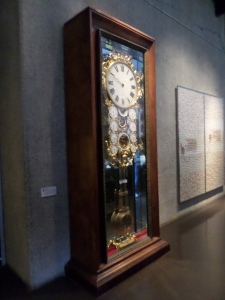 I thought this clock in one of the museum exhibits was so cool!

Matt pointing to the Radio Times cover from the week he was born.

Matt and I with a dalek. Scary!

Although we only managed to see two attractions, we had lots of fun! Before we got going, we had lunch at Thai Square in Soho and after the museum, we had drinks at Retro Bar. I’d never been there before, but it was tons of fun! Matt recommended it and I’m glad he did because it turned out to be a pub quiz night! Although we fought valiantly, we didn’t win. And most of the correct answers we got we only got right because of Matt (thanks Matt!). Here’s a picture of the three of us enjoying the evening: 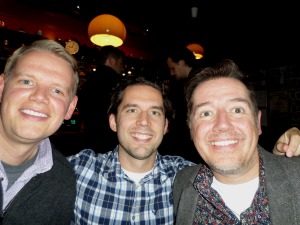 All in all, a great first (full) day! Of course, since I’m writing this post a bit later than usual, we’re already finished with our second day as well! Look for another post about that soon.

London - What A View!