Okay, I’m only calling this post Looking Back because I’m about to recap the last full day of the London trip I returned from about six weeks ago. But hey, that’s okay!

Our last day in London was a good one! After all the excitement at the Doctor Who Celebration the day before, it was to really nice to have another day to wind down and see more of the city before flying home. It was also nice not having to get up early that day, which seems odd considering we were on vacation, but we had to get up early the day before to get to the event and again the day we left so we could catch a train to the airport. As I recall, we didn’t leave the house until around 12-1p, but since we didn’t have anything in particular planned, it didn’t matter!

Our first (and really only) major stop of the day was to Harrods. I wouldn’t say that any of us are big shoppers, but Harrods is a destination in London – just one of those things you should see at some point. Scott and I took pictures outside of it on our trip in September, but we didn’t go in, so that was a first for me on this trip. Although I’m sure it’s always busy there, the fact that it was a weekend close to Christmas meant that it was probably even more busy! There were tons of people milling around, many of them probably tourists like us, so we just stayed long enough to get a couple of things from their Food & Wine area and then skedaddled. Don’t let the crowds scare you off though – I still think it’s something you should see when you’re in London! But try going on a weekday if you don’t like crowds as I suspect it would be less busy then.

Throughout the morning, I’d been texting with our friend Jason, who we all know through conventions and who was in London for the Doctor Who event as well, but he didn’t travel with us. We had managed to catch up with him for just a bit on the Saturday there, but we had been hoping to meet up again on Sunday. Thankfully, that worked out when he and his friend Joey met us after we left Harrods. Since we had no specific plans, we did that little “what do we do/where do we go” song and dance for a bit, but we agreed we were all hungry, so after some to’ing and fro’ing, we found somewhere we could all agree on. To be honest, I don’t even remember the name of this place – the food was fine, but there was nothing amazing about it and I believe it was a chain.

In true tourist fashion, we decided we would visit the London Eye after our meal. I hadn’t been on the Eye in years, despite the fact that Scott and I tried to go on it three times in September, so I was excited to go on it again. Some people may ask what the big deal is – it’s just a ferris wheel, right? Yes, that is true, but the Eye is another one of those “things you should do” when you’re in London. I would especially recommend going on either a clear day, because you get some great views when you’re at the top of the wheel, or in the evening so you can see London all lit up. For things like this, I would normally recommend pre-booking tickets to avoid a potentially long line, but because of the weather in London, you may want to buy your ticket the day of to avoid pre-booking for a day when the weather is bad. Even if it’s rainy though (as it so often is in London), you’ll still have a good time!

Since we were solidly in the evening hours by the time we finished on the Eye, we decided to make our way back to Retro Bar! I think I need to make this place a stop on every London trip. Seeing as how I’ve been there two trips in a row, I’d say I’m well on my way to doing that. 🙂 Much fun was had and much alcohol was consumed throughout the evening. Just ask Bill! Or Shaun. Or Joey. Ha! We really did have a lot of fun that evening – it was one of those nights where you just get to let loose with a great group of friends that you don’t hang out with often enough. And we were even (somewhat) responsible and didn’t stay out too late! That was mostly because we had to get up early-ish the next morning to fly home, but it still counts!

What’s that you say? Pictures? Sure!

The crowd outside of Harrods. 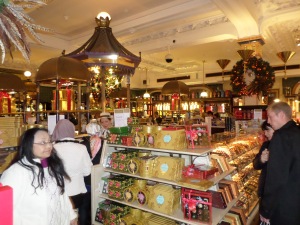 Unsurprisingly, there was a crowd inside, too. 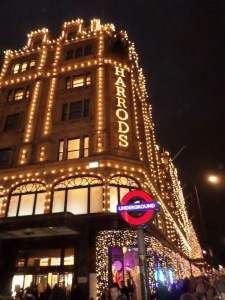 Harrods lit up at night. Not sure if it’s like this year-round or if this was just for the holidays.

Us with our friend Big Ben. And please learn from my example – pictures from this angle aren’t flattering!

I never seem to walk around London much at night, so it was fun to see the Eye and the lights from the Embankment. 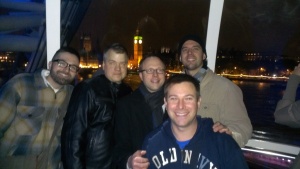 Who’s going to get the picture taken on their phone first??

More of us on the Eye. 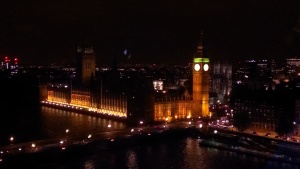 Like I said, it’s great to see London lit up from the Eye! 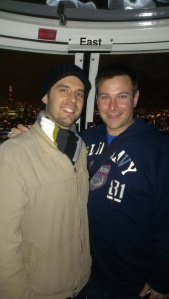 So glad we got to meet up with Jason!

Jeff and Shaun at Retro Bar.

First take of our group shot at Retro Bar. Finally got Joey in a picture!

And thus ended our trip to London. Well, more or less. We still had to fly back the next day, obviously. Bill may have been feeling the tiniest bit delicate from the night before, but we made it to Heathrow in one piece and from there to our respective planes (Bill, Jeff, and I back to Mpls and Shaun to LA). Bill and I happily took business class seats as we did on the way there, still feeling a bit bad that Jeff couldn’t join us. However, the flight was fairly empty, so Jeff snagged a whole row to himself. That never happens to me! But since I was in business class, I won’t complain. 🙂

If you’re still reading by now, thanks for your patience as I finally got this blog posted! Now, I just need you all to post lots of insightful comments.

2 thoughts on “Looking Back – Sunday in London”