Well, the convention is over. Le sigh. Conventions, especially this one, are a lot like Christmas. There’s a ton of excitement and build-up leading up to it, loads of fun during it as you get to see lots of friends and have a fun time for a few days, and then a bit of a letdown when it’s over. I always get a case of the post-convention blues after it’s over, but it’s far better now than it used to be. The wonders of Facebook and social media help us all stay more connected even when we aren’t together. 🙂

So what about the rest of the convention? Well, it was much like the part you already read about! The Sunday of Gally is both crazier and quieter. Crazier in that everything comes to a head as everyone runs around getting their final autographs, going to their final panels, etc. and quieter in that things wind down pretty quickly once the convention officially ends that evening. I got to see a number of my friends at dinner and as we hung out around the hotel that night, which was great. We had a heck of a good time during our mini-room party that night. Lots of greats memories!

How about a few more pictures??

My lovely boys and me at the TARDIS. 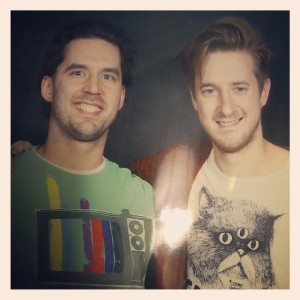 Me with Arthur Darvill (Rory Williams), who was in Series 5-7 of Doctor Who.

Jeff, Matt, and me in the hotel sports bar after the convention ended. 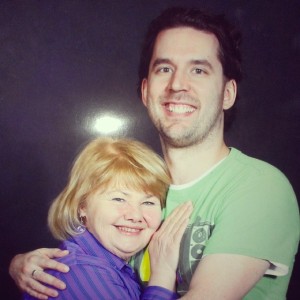 Me with Annette Badland, who guest starred in a few episodes in Series 1. Annette is the guest I worked with this year and she was fabulous! It was her first time at Gally and she was so nice and laid-back.

I was probably most excited to get a photo with this lovely woman – Jean Marsh. Not only was she in three separate classic Doctor Who stories, but she also played main roles in two movies I loved growing up – Princess Mombi in Return to Oz and Queen Bavmorda in Willow. She’s a real class-act!

All told, I had yet another fabulous time at Gally this year. It felt a little weird to have to think about leaving on Sunday night (my flight left LA at 1p on Monday) because I’ve flown home on the Tuesday for the last couple of years. Of course, my immediate reaction after leaving early this year is to make sure I don’t leave early next year! I’ve got plenty of time to figure that out though. I also felt a little bit cheated of some time with my friends because of my flight delays last Wednesday, so I probably will at least make sure I come in earlier on Wednesday next year. But that’s part of the joy of travel. Sometimes you’re early, sometimes you’re late, and sometimes you don’t make it at all. The important thing is that you do it – get out there and see and do whatever it is that drives you. It could be a random road trip, a backpacking jaunt around Europe, or a trip to LA for a Doctor Who convention.

I’ve been hatching plans for my next trip(s), so you’ll hear more about those soon.

One thought on “More Gally Goodness”