Or perhaps more accurately titled, A Study in Pest (since our apartment and everything thing we saw on our first day was in Pest, rather than Buda).

Fun fact – I started working on this post yesterday, but the fact that I was finally sitting in one place for an extended period of time with a bed a mere ten feet away from me meant that I quickly succumbed to the siren call of sleep…at 815p. But hey, after being awake for more than 30 hours, I think that’s okay! Scott was in bed just after 7p, so I definitely made it longer than he did. And it’s now just after 930a, so I was in bed for about 13 hours. I wish I would have slept straight through that whole time, but I woke up around 2a and was awake for at least an hour – boo! That’s the problem with international travel though – your sleep is screwy at the beginning (and usually the end) of the trip. But as I’ve said before, it’s so important to get on the right sleep schedule as quickly as possible when you start an international trip, so if you find yourself in a similar situation, stay in bed! Don’t actually get up at 2a because you’ll find yourself falling asleep far too early in the evening. Read for a bit, count sheep, or whatever else will put you to sleep, but stay in bed!

Anyway, onto our first day of adventures of Budapest! We unfortunately weren’t able to fly directly here from the Twin Cities, so we flew to Amsterdam first, where we had a four-hour layover and then continued on to Budapest. For the first time, we decided to spring for Economy Comfort seats on our flight to Amsterdam and they were worth it! Scott is nearly 6’4″ and I’m 6′, so the extra leg room (Delta says it’s 4″, but it felt like more than that) was much appreciated. It cost us each an extra $140, but in the scope of the entire cost of the trip, that wasn’t a big premium, so we went for it. I recommend it! At the end of the day, I look at planes as just a way to get from A to B, but it’s nice when that journey can be made that much more comfortable. Since the flight to Budapest was part of a different leg on KLM rather than Delta (just like our flight from Zurich back to Amsterdam will be at the end of the trip), we only get those seats between the Twin Cities and Amsterdam, but those are the long-haul flights, so that’s fine by me.

So…Budapest! After doing some research into getting from the airport to our apartment (via taxi, public transport, or shuttle), we decided the airport shuttle would be the best option because it’s a door-to-door service, so no worry about getting on the wrong bus/tram or about paying too much for a taxi. If you’ve read my blog before, you know I’m a big supporter of using public transport while traveling, but there are often more efficient options for airport transfers that don’t break the bank and this is a great example of that. It cost about $33 USD round-trip for the two of us, so only about $8 per person per direction – not bad! If you’re planning a trip here, check out the link above to look at the service and to request the cost (you’ll need to know your drop-off address). Because of our apartment’s location, we had to get dropped off about a half-block from the building and we were just trying to figure out exactly which building it was when Barbara, the owner of the apartment (which we booked through Airbnb, of course) met us and took us up. She was so nice! She spent about a half-hour with us after we got to the apartment, going through a map of the city, pointing out the things we should (and shouldn’t!) see, giving us restaurant recommendations, etc. She was great! And the apartment is a good-sized studio that should suit us just fine (see below for pictures).

Although we were wiped from the flights and not sleeping for a full 24 hours, we were anxious to see the city, so we took some much-needed showers and set out to explore. Since it was already mid-afternoon, we kept the exploring pretty light, focusing on the famous boulevard, Andrássy út, which is just a short walk from our apartment. It’s a long boulevard with lots of shopping, restaurants, gorgeous homes, and embassies. The design is somewhat similar to the Champs Elysses in Paris, actually. Although we weren’t interested in shopping (typical), the walk in the great weather was lovely and we eventually reached Hősök tere, aka Heroes’ Square, where we snapped some pictures before walking a short distance further (across the street, really) to see Vajdahunyad Castle, also from a bit of a distance. Very cool building! Knowing that we were fading fast, we decided to walk back and find somewhere to eat along the way. Barbara had recommended a few places, so we decided to find a Thai place she mentioned. After a big of Google Mapping, we found it! Scott loves Thai food and I like some dishes – neither of us were disappointed! If you’re looking for a good Thai meal in Budapest, check out Thai Leves és Wok Bár on Kazinczy. A word of warning if you don’t like spicy food though – they don’t skimp on the spice. 🙂

I suppose you’d like to see some pictures? Oh, very well! 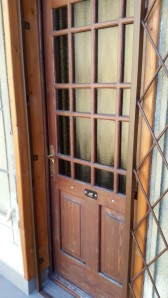 The entrance to our apartment. 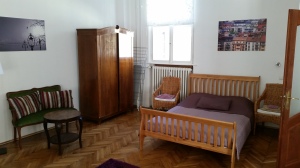 The sleeping area, which is in the same room as the living area.

The small, but functional, kitchen. 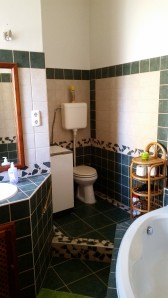 Probably the biggest bathroom we’ve seen in any Airbnb apartment!

The view on the street just outside our apartment. 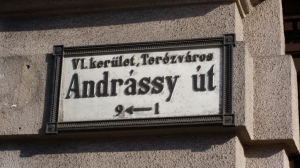 Starting our walk down Andrássy út.

Some gorgeous sculptures outside a building on Andrássy út.

A Metro sign. Budapest had the first underground metro in continental Europe!

The House of Terror, a museum dedicated to the two terror regimes (and their victims) in Hungary.

A lovely cobblestone walking path. Only lovely for a short time though – cobbles are not fun to walk on!

A panorama of Heroes’ Square.

The Millennium Monument in Heroes’ Square.

Me standing at the base of the column at the monument. 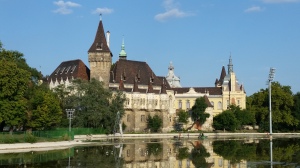 So despite lots of traveling and no sleep, I think we did pretty well on our first day here. Onwards to day two…as soon as Scott wakes up. 🙂

Come Fly With Me