It’s hard to believe, but my time in Brighton is already nearly over. I’m sat here in my hotel room writing this blog about an hour before I have to head to the station to get a train back to London. What a great weekend it’s been though! Although Brighton is a fun town with some neat things to do, the main reason I came here this weekend was to catch up with friends and have some Doctor Who-related fun at Timey Wimey. Mission accomplished!

Although Bill, Jason, and I got to do a little exploring/hanging out in Brighton on Friday and Saturday, Sunday was all about pulling off this great Doctor Who event. I was working as a guest liaison (same thing I do at other conventions I work at) for my dear friend Sophie, who was as fabulous as always. Generally, I stay with her and her family when I visit London, but they’ve recently moved further out of London (though still not too far away), which is what led me to stay at Sophie’s mother’s house (which, as I’ve said before, is just perfect). Since I hadn’t seen Sophie yet on this trip, getting to spend most of the day yesterday was a bonus! We were of course busy with Timey Wimey stuff for a good majority of the day, but also had lots of time to catch up on each others’ lives. I originally met her over nine years ago when I first traveled to the UK with my friend Ruth Ann. Since then, I’ve stayed with her family a number of times and gotten to know them all really well. Just another example of why I love travel so much – I’ve met so many great people over the years who will certainly be part of my life for years to come.

So how did Timey Wimey go? It was brilliant! Everything went off without a hitch, the guests were on top form, and the attendees had lots of fun. The big draw for the day was the actor who played the Fourth Doctor from 1974-1981, Tom Baker. Although he’s still involved in the world of Doctor Who and does some events now and then, he doesn’t do them often and he definitely doesn’t travel far from home (he certainly doesn’t travel out of the UK), so this was likely my only opportunity to see him at an event like this. My friends and I did see him last year at the 50th anniversary celebration, but that was in a convention hall with a couple thousand other people, whereas this event had about 200 people. Not only did I get to hear him speak at a one-on-one panel (just him and an interviewer/moderator) for probably the only time in my life, but I also got to have a picture taken with him (also a once-in-a-lifetime opportunity at this point). I had a bit of a panic when I realized he had left the photo area, but my lovely friend Neil saved the day when he told me I could still get a photo if I dashed up to the green room. So dash I did! I was the very last photo he took. 🙂 It was smooth sailing from there on out and the rest of the day was great. My friends and I didn’t do anything outside of Timey Wimey, but we had fun chatting and hanging out in the hotel bar after everything was done. All in all, it was an outstanding day and this experience alone made this whole UK trip worth it.

Now, I told you to prep for a lot of Doctor Who in today’s pictures, so I hope you did! 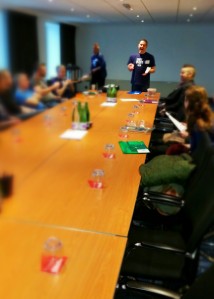 Matt talking to the convention staff/volunteers before the big event started.

The stage wasn’t empty for the rest of the day after this!

Okay, I lied – it was still empty a couple of minutes later when I took another pictures as they were testing the video. 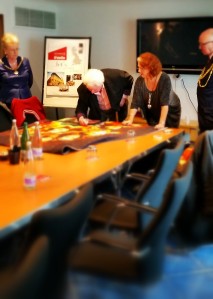 The man himself – Tom Baker. He wasn’t signing autographs, but he did sign some items for the charity auction in the green room. 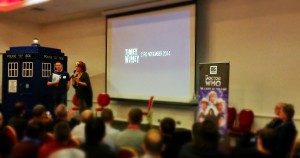 With Tom having arrived, Matt and the fantastic Louise Jameson officially kicked the event off for the attendees. 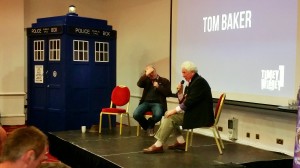 Tom on stage with Toby Hadoke.

My friend Sophie on stage.

Spotted in the green room between panels. No one was certain if these were original props from The Robots of Death, but we’re pretty sure they were.

Sneaking a photo of someone in the photo session with all of the amazing guests (minus Tom, who was just there for a few hours).

A panel with all the companion guests.

The companions auctioning off a few items that hadn’t sold during the silent auction earlier in the day.

At the very end, a cake with 51 candles on it (for 51 years of Doctor Who) was brought out so we could wish our favorite show a happy birthday.

A quick photo with Sophie before she caught the train home. 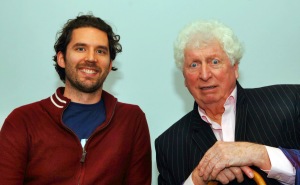 Saving the best for last, my photo with Tom. 🙂

And that’s all she wrote for Brighton! You got this post on Monday morning instead of Sunday evening because I was wiped from a very fun and full day, but I woke up feeling great this morning because the sun is shining! I had to take advantage of that by walking around and snapping a few more photos in the sunlight, so look for another update with those later today. For now though, it’s time to head back to London.

3 thoughts on “Friends, Laughter, and Doctor Who – Day 3 in Brighton”

He Works Hard for the Money