Yes, dear readers, I’m back! Did you think I’d abandoned you after you didn’t see a post from me yesterday? I’m sure you probably didn’t. 🙂 The reason for the absence is two-fold. First of all, we were en route from Iceland to Norway yesterday, so we didn’t do a whole lot, other than catch a flight. We’re also two hours further ahead in Oslo than we were in Reykjavik, so factoring that in plus travel means we didn’t get to our apartment in Oslo until nearly 6p yesterday, which gave us enough time to get settled and have a meal. Secondly, I unfortunately picked up a cold in full force yesterday (it was legitimately like a switch got flipped – I didn’t have one when we left Reykjavik and then I did by the evening in Oslo), so I didn’t feel up to doing much of anything. While I still have that cold today, I’m happy to say that we still had a productive day and did a lot in Oslo. Want to know what we got up to? Read on…

And who says you need to spend a lot of money to see and do stuff when you’re traveling?! To be fair, it doesn’t usually work out that we have a day full of free stuff to do, but it’s nice when it does happen.

Speaking of free, how about a free photo tour of our day?

Our home in Oslo! Haven’t managed to get pictures inside yet, but hang in there – I will!

It’s easy to think of graveyards as cold, spooky places, so I took advantage of a chance to get this photo of one bathed in sunlight as we walked around town.

The exterior of the National Museum.

A cool wall of sketches in the National Museum. 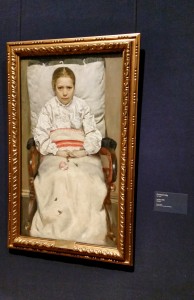 I found this painting to be pretty creepy, so naturally I took a photo of it.

The changing of the guard at the palace.

Another shot of the palace as we were walking away from it. This is one of my favorite shots of the day.

Need to know where you’re going? Look for the directional signs!

Another favorite shot of the day – outside the cathedral.

I’m not quite sure why this is inside the cathedral, but I loved the colors.

The cathedral ceiling has some amazing colors, so be sure to look UP when you’re there. 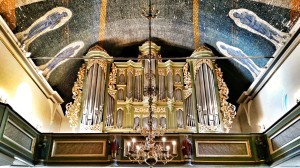 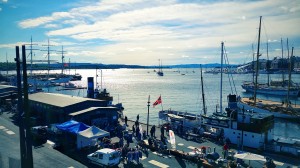 Quick shot of the water by the fortress. 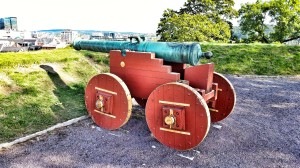 Heavy artillery at the fortress.

Another favorite shot of the day. Yes, I know that’s three, but I can have as many as I want, right? 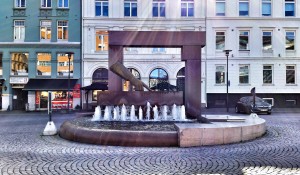 The opera house seen from across the water. See the big, slanty sides? Yeah, that’s what we had to walk up.

I told you we walked up the slants! 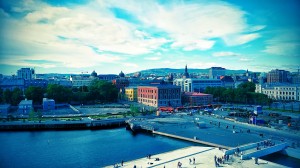 Cool views of Oslo from the top of the opera house. 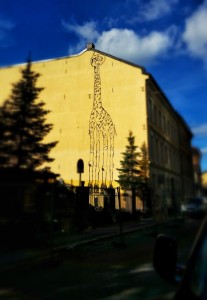 Why someone graffiti’d a huge giraffe with the face of ET, I’ll never know, but I thought it was worth a picture.

Given how tired I was feeling because of this stupid cold, I was very happy to see as much as we did today. Proof positive that you can get a travel cold and keep soldiering on though! I’m definitely looking forward to seeing the back end of it soon though.

Tomorrow is our last day in Oslo as we’re off to Bergen on Tuesday. We’ve got some good plans for tomorrow, so check back soon!

A Lovely Day in Oslo