Every time I think I can’t come up with a snappy, alliterative title for a blog post, my brain throws me a bone. I’m sleepy and in Scotland?! The title writes itself!

Anyway, it’s 8 PM on our first day of this trip and you know that that means – bed time! Making it this late is kind of an accomplishment, to be honest, but I’m feeling awake enough at the moment that I think I can bust this post out before I pass out on the keyboard. If you see a bunch of zzzzzzzzzzzzzzzz though, you’ll have to assume I lost my fight against Morpheus. As it happens, we didn’t actually do a whole lot today, so it isn’t hard to write about!

Most of today was taken up by traveling, which is a bit of a drag, but it comes with the territory. You have to get to the place you’re going so you can enjoy it! While we did both really appreciate having lay-flat seats on our Mpls->Dublin flight, we still didn’t manage to get much sleep. I think we both got a little bit, but couldn’t have been more than an hour (at least not for me). The flight really isn’t all that long and we ended up landing nearly an hour early. Hooray! Unfortunately, arriving early is sometimes no better than arriving on time because if you don’t have a gate to de-plane to, you’re stuck on the tarmac. And that’s exactly what we were – stuck. For almost an hour! We did finally get off the plane and made it through Customs relatively quickly (though we seemed to pick the agent who asked a LOT of questions to everyone in front of us, but only a couple to us – go figure) and our bags were waiting for us as soon as we walked out. Another hooray! Unfortunately, this hooray was also followed by a let-down as we had 3.5 hours to kill before our flight to Edinburgh. Uuuuuuuggghhhhh! Our options for flights to Edinburgh were either 9:55 AM or 12:35 PM and, based on our original landing time of 8:15 AM, we thought the earlier flight would be too big of a risk because you never know what Customs will be like, nor did we know if we’d be able to check into our hotel early. So we sucked it up and just waited around until the moment we could check into our Edinburgh flight (three hours early) and then high-tailed it to a lounge to…sit some more. But at least it was more comfortable in the lounge than it was standing around waiting for our flight to open! Incidentally, if you’re wondering what lounges we’ve been visiting, we go through Priority Pass, which I get free membership in thanks to my Marriott Bonvoy American Express card. It’s one of those cards with a steep annual fee, but the benefits (lounge access, $300 Marriott credit annually, paying for Global Entry every four years, etc.) make it totally worth it for me.

Ready for some airport/airplane-based photos?!

Our plane getting prepped to fly to Dublin.

We were in the very front seats of the plane (Row 1, in single seats across the aisle from each other). The plane definitely felt a little run-down, as compared to what I’ve experienced on Delta, but was still nice. 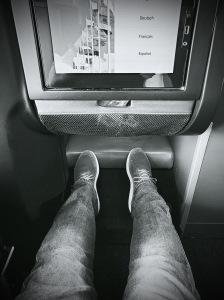 You can’t deny that legroom! When you lay flat, your legs go allll the way to the back of that area (even Scott, who is nearly 6’4″, fit fine). 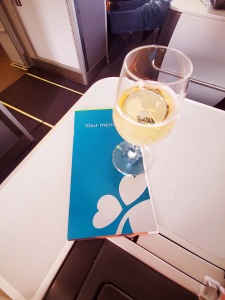 A nice little pre-flight champagne. Which, if I’m honest, I don’t even like that much, but when in Rome, right? 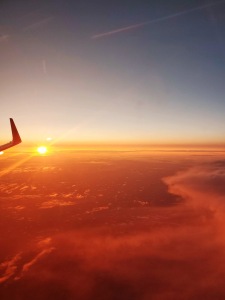 Being at the window when I’m usually on the aisle meant that I got to snap a nice photo of the sunset shortly after take-off.

They served us these little amuse-bouches before our main course came out. They didn’t feel super fresh, but were decently tasty.

My main course was a filet of beef that was really nice and cooked perfectly (a little tough, but that was at least partially due to the not-sharp knife I was given).

I’m laying down flat. ON AN AIRPLANE!! 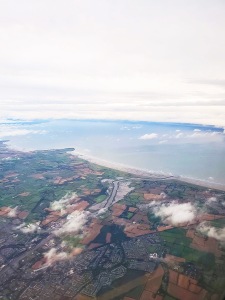 A nice shot of Ireland just before landing.

After another flight (thankfully short, around an hour), we finally reached our first destination – Edinburgh! Known for things like Edinburgh Castle, the Edinburgh Fringe Festival, the Palace of Holyroodhouse, and lots more, we were excited to arrive! But also tired – so very, very tired. So after getting our bags and catching an Uber to our hotel, we knew we would get showered up and have dinner, but we figured we wouldn’t do much else. We’re staying at the hub by Premier Inn Edinburgh Royal Mile as I had such a good experience the first time I stayed in one during my January 2018 London trip. I knew the room would be small (even though we’re in the “bigger” room option), but as with the Westminster Abbey location, it’s clean, comfortable, and has fast wifi and good water pressure. And of course, it’s in a great location, just off the Royal Mile. It will be a great base of operations! And the fact that Scott is already asleep next to me must say something about the comfort of the room. 🙂 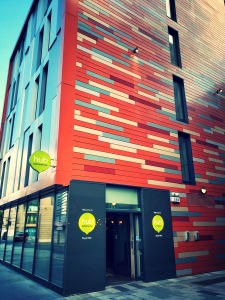 Heading into our hotel.

Check out the link to my January 2018 London trip above to see proof that what we have here really is the bigger option!

The bathroom is pretty much identical to what I had in London.

After settling and showering (FINALLY! – there’s nothing in the world quite like the feeling you get from showering after traveling for a long time/over a long distance), we decided getting dinner was about all we had in us tonight, especially as it was approaching 5 PM. As usual, I let Scott drive the food choices and he found a tasty-looking Thai place called Ting Thai Caravan. It took us 12-15 minutes to walk there and that walk allowed us to see a little of the Royal Mile and the area around the hotel. Scott thought the food was super on-point and that the massaman curry he had was in the top three curries he’s ever had. If that’s not a glowing recommendation, I don’t know what is! If you like Thai food, you should definitely visit.

Getting a peek at the Royal Mile on our walk to dinner.

The restaurant isn’t big, with several long tables, so you can expect to sit next to other patrons at the same table. Nice atmosphere though. 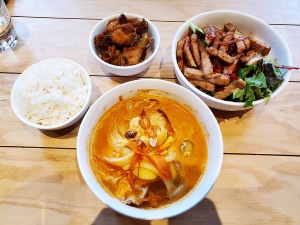 The dishes are very shareable and we had, from the top, peng gai kao prik (spicy chicken wings – tiny, but juicy and flavorful), yam moo yang (grilled pork with lots of extras – tasty, but the fish sauce in it was a turn-off for me), and massaman gai (massaman curry with chicken – very good!).

Unfortunately, we got caught in a little rain on the walk home (I realized we didn’t have umbrellas when we were leaving the hotel, but couldn’t be bothered to go back up to get them). We got a little wet, but at least we got a rainbow out of the deal. 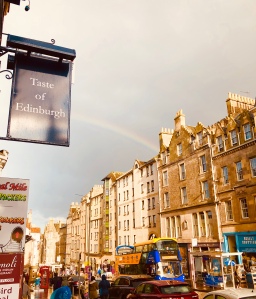 The rainbow was a little light, but seemed like a great sign of what’s to come over the course of this trip.

Hub hotels tend to have cozy little bar areas and ours is no exception, so we stopped there to dry off a bit and have a drink before heading back up to the room. After catching up on a little TV, Scott quickly lost his battle to stay awake until at least 9 PM, but he made it to 8 PM, which isn’t too bad, really. And now that I’ve wrapped this post up, it’s time for me to get some shut-eye, too. Looking forward to our first real day out in Edinburgh tomorrow though! We had no set plans, but of course, we pulled together a fun itinerary, so head over to this post to check it out.