Our first full day in Belfast is in the books! And it’s our only full day here, since we only had part of yesterday, we have a full-day sidestep out of Belfast tomorrow, and we leave for Galway on Saturday morning. I really think we made the most of it though and the weather was the polar opposite of yesterday – sunny and G-O-R-G-E-O-U-S, with a little bit of a breeze. Truly the most perfect weather day on the trip thus far, so we really enjoyed it. Check out our itinerary below!

Knowing that we had only this one full day to really experience Belfast, we wanted to do it right. At the top of the “doing it right” list was Titanic Belfast as Titanic has such a strong connection to Belfast, since it was built here. Although we had already planned to do it, we didn’t book anything ahead of time, mostly because we didn’t have any impetus to, but a friend of ours who was recently here pointed out on Facebook that we should pre-book because he didn’t and wasn’t able to go as a result. Now, that could have just been a timing issue (since he was here for a limited timeframe as part of a cruise), but we didn’t want to miss our chance, so we pre-booked (you choose a specific arrival time as part of that process) to make sure we wouldn’t have any issues getting in. Because it’s so easy to do that, I definitely recommend it, especially knowing (now) how easy it is to pick your tickets up when you arrive (you can go through the ticket line or you can visit the self-serve kiosks).

So what was the experience like? In a word, I would say…okay. I think we were both expecting something a little more akin to a museum, with lots of artifacts from Titanic, lots of information about the boat and its journey, etc. Instead, what we got was more an experience that started with Belfast, its background and the lead-up to it becoming an important ship-building hub, which then transitioned to learning more about Titanic itself. To be fair, things did get more detailed about the ship and the work that went into it after the Belfast info, including a short cable car “ride” that took us through some highlights of building the ship (similar to The Scotch Whisky Experience). While there were some mock-ups of cabins, there were very few actual artifacts from the ship (maybe those aren’t really on display anywhere?). The whole experience was still educational though and at £19.50/$23.50 USD each, it wasn’t too expensive. Given the iconic status of Titanic, this feels like a must-add for any Belfast itinerary.

Hopefully these photos won’t “sink” any of your expectations!

This sculpture is right by our hotel and I liked the look of it, so you get to see it. 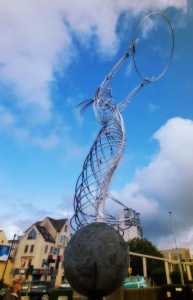 We also saw this sculpture, Beacon of Hope, further along on our walk to Titanic Belfast.

These fish remind me of the ones along the Victoria Embankment in London.

A directional sign pointing to Titanic Belfast, with the actual building in the distance. 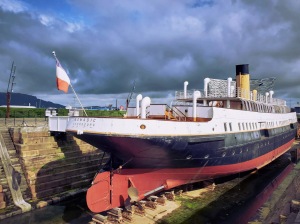 SS Nomadic was built to transfer people and mail between Titanic and Olympic. Entry to walk through it is included in your Titanic Belfast ticket, which was a nice bonus. 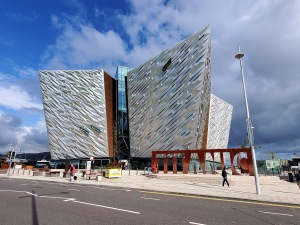 About to head into Titanic Belfast.

Reproduction of a headline (real or not, I’m not sure) in the section of the experience about Belfast.

A tobacco tin from Belfast. 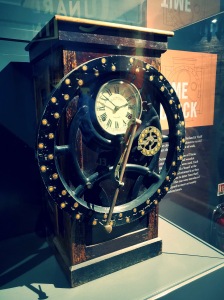 This huge contraption was used by ship-builders as a time clock.

One of the staff members telling us about how the frame of Titanic was built. 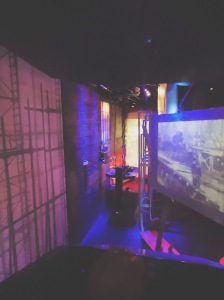 A shot from the cable car “ride” where we learned more about Titanic’s construction. 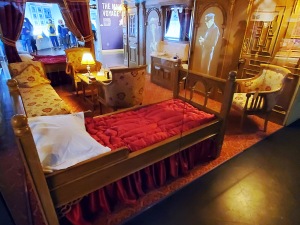 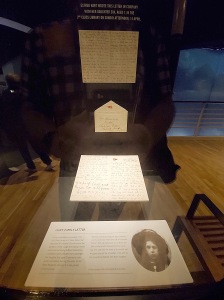 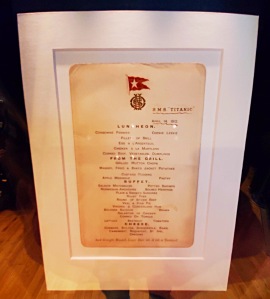 A lunch menu survived, too. Looks like a tasty selection!

Diving equipment in the section (at the end) that allows visitors to immerse themselves in the underwater video from the shipwrecked remains of Titanic. 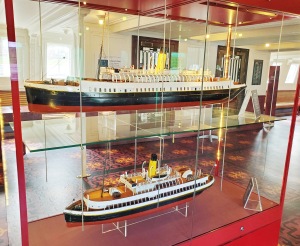 Equipment on the Nomadic’s deck. 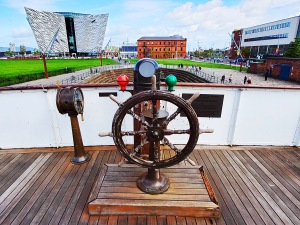 The view the captain would have had, except there would have been, you know, water around him.

After our experience with Titanic, we didn’t have far to walk because we were heading right into a waiting black cab. But not just to get a ride to our next destination, oh no – the hotel concierge (once again, for the win!) set us up with a black cab tour around the city to learn about The Troubles. This tour was recommended to us by multiple people, including Scott’s Irish co-worker (thanks Lainey!), but when we looked into it yesterday, we had trouble finding an available tour at short notice. But a quick stop at the concierge and we were good to go! These tours are very well-known here and there are lots of companies offering them, though I don’t know which one ours was through, since we didn’t book it, so I can’t point you to a specific company. I’m sure they all get the job done though and they have the same mission – to show visitors around the city and share information about The Troubles, which was a period of unrest caused by political and nationalistic differences, with a strong element of religious differences, too (Protestant vs. Catholic). Through riots, disagreements, armed conflicts (like Bloody Sunday), and more, 3,500+ people died and seeds of discord were sowed for decades to come. Although The Troubles were officially said to have ended with the Good Friday Agreement in 1998, issues remain today, though not to the same level as the past. But, as we learned on our tour, a physical barrier (the Peace Wall) still exists between the Protestant and Catholic parts of the city, so things aren’t perfect yet. It seems like they’re on the upswing though, so hopefully they will continue to improve.

Our driver/guide did a great job of explaining things and giving us chances to stop and take photos as he drove us around. 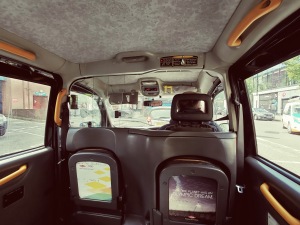 In our cab, on the tour.

King William of Orange, whose victory at the Battle of the Boyne is celebrated in Northern Ireland.

Reminders about The Troubles to try and keep the same issues from arising again.

These kinds of murals and artwork are on lots of buildings around Belfast.

The old Crumlin Road Courthouse, which closed in 1998, can’t be torn down because it’s protected as a historical building. People have tried to redevelop it, but it hasn’t worked out thus far, and it has been continually damaged in a series of fires.

Taking pictures at the Peace Wall. 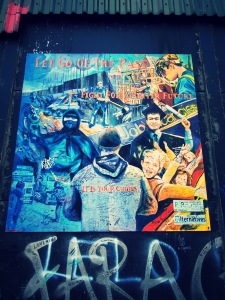 I really liked this artwork in particular. 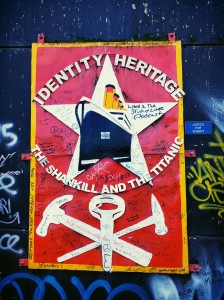 An Irish Cross at a memorial for victims of The Troubles on the Catholic side of the Peace Wall.

There seems to be strong support from Irish people for other countries/groups going through similar situations as The Troubles. 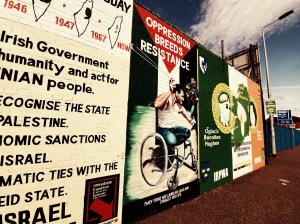 More artwork in a different part of Belfast.

The tour was definitely worth it! We paid £20/$24.50 USD each, which felt like great value for money. And because we were already in a cab, we were able to have our driver drop us at our next location, Belfast Castle. We got the sense that he would have dropped us anywhere near where we started for no extra charge, but because the castle is further out (about five miles from our hotel), he basically put us on a metered ride, so we paid another £10/$12 USD for that (which is what we would have paid for an Uber/taxi anyway).

As mentioned above, our Belfast Castle experience wasn’t like a typical “go visit a castle/palace” experience, mostly because it isn’t a castle you actually tour. The castle was never home to royalty (though it’s still an impressive building) and is used more as an event space for things like weddings and meetings. We weren’t really clear on that when we arrived, but a quick Google search set us straight. Instead, we walked around and snapped some photos of the building, the grounds, and the outstanding views of Belfast. Had we visited yesterday, this would have been a real bummer, but with today’s amazing weather, we enjoyed being able to just walk around and enjoy the views. Also, thanks to our nice hotel breakfast, we had already planned to do a late lunch/early dinner (since we knew we wouldn’t need lunch at mid-day), so we took advantage of the Cellar Restaurant at the castle to do exactly that. Scott had fish and chips and I had a pulled pork sandwich, both of which were surprisingly good. It was a really nice way to end the day!

These photos may not be royal, but they’re still nice. 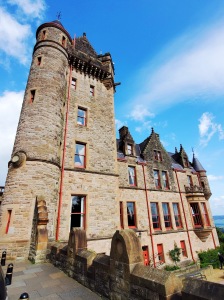 Looking up at the castle. 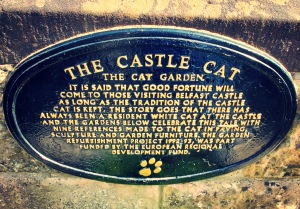 Interesting plaque at the entrance to the castle gardens.

What great weather to get some nice photos!

It looks great from the back, too.

Couldn’t you just sit in these gardens all afternoon on a day like this? 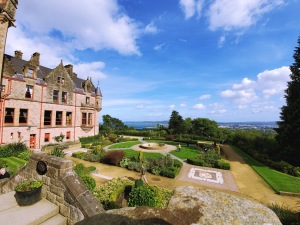 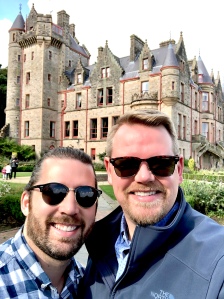 Did you think we wouldn’t take a selfie?? Think again!

Right before we left, I found the cat! Can you see him?

We debated trying to squeeze in something else today, but decided we would just head back to the hotel and relax. And as a bonus for me (and almost certainly for you too, dear reader), I got to catch up on my posts! With this one done, I’m caught up and ready to go for tomorrow’s day trip to Giant’s Causeway (and some other fun places). Read about it here, if you’re so inclined!