Feet up, drink in hand (well, next-to-hand), a nice, Irish breeze (hey, we’re in Ireland, so the breezes are Irish by default) blowing in the window, and the sounds of Dublin around us. Today was a good day to explore Dublin – great temperature, sunny without being TOO sunny, a nice breeze, and everything we wanted to see was easily walkable. So a pretty perfect day!

As always, we started with a list of several places to visit and things to do, but here’s what we narrowed it down to:

Waking up this morning was a little difficult as I had another less-than-stellar night of sleep last night. Ugh! The bed in our apartment isn’t the best, but with nothing to wake up early for our entire time here (including Friday, as our flight home doesn’t leave until early afternoon), I’ll soldier on. It will just make me look forward to getting home that much more. 🙂

After shaking off the drowsiness, we hit the road (well, sidewalk) to head to the aforementioned photo stops. First of all, I wasn’t really sure what the Spire of Dublin was (Scott put it on the list and I wasn’t familiar with it), so I was thinking it may be something we walked up. Nope! It’s just a big ol’ metal spike that sticks out of the ground on O’Connell Street and marks the former site of Nelson’s Pillar, which was destroyed by bombs in 1966. Picture a giant metal spike (nearly 400 feet tall) in the middle of a street. Got it? That’s what the Spire of Dublin looks like! Worth a look because it’s a notable landmark here.

Up next was our stop at the Famine Memorial, a collection of statues commemorating the lives lost in the Great Famine. Not sure what that is? Potatoes were (maybe still are?) and important crop in Ireland historically, but for three years, potato crops were crippled by a type of mold, creating a food crisis that caused the death of a million people and the emigration of a million more, which is why Ireland today is one of the only countries with a smaller population today than it had 150 years ago. These statues were placed in this spot to mark the departure of Perseverance, one of the first ships to take Irish immigrants to new homes to get away from the famine. Again, this is a quick stop, but it’s worth seeing in person as a reminder of this tragedy that changed life in Ireland so dramatically.

Photo stop photos to phollow. See what I did there?

The Spire of Dublin.

This building is just down from the spire. 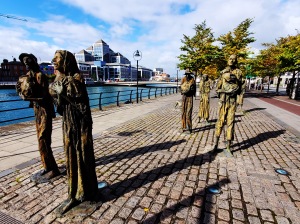 With those photo stops checked off the list, we booked it over rather quickly to 14 Henrietta Street. Normally, we wouldn’t have to hurry to get to a museum, especially on a random weekday in the off-season, but this place is a little unique in that you can only experience it via guided tour and those guided tours only start on the hour. Given the time, we knew we could make it for the 11 AM tour if we walked quickly, so that’s exactly what we did! The website actually recommends pre-booking your tickets, so I bought them while we hustled over. That turned out to probably not be necessary, as there were only seven other people there for the 11 AM tour, but better safe than sorry. Presumably it gets much busier on weekends, during the summer, etc., so I would still recommend pre-booking, if only for the fact that you’ll know you’re guaranteed to have the slot you want.

Enough logistics – let’s talk experience. This museum is very new as it only opened in September 2018, but it’s quickly become a must-visit place in Dublin and after going through it myself, I agree with that recommendation. As mentioned above, it was originally built as a stately home for a wealthy family, but was later sub-divided into 17 apartments for the working poor. By 1911, it was home to over 100 people! And yes, if you’ve done your math right, that means some apartments had a LOT of people living in them (one couple lived in an apartment with their 15 children – FIFTEEN!!). The tour, which lasts for 75-90 minutes, takes you through the history of the house, from its beginnings to when the last tenants moved out in 1979, with short videos about the various eras in each of the rooms. Some of the rooms are also made up to show what life would have been like in their respective eras, so it was like walking through bits of history as we made our way through the tour. Our guide (I’m blanking on his name, but I think it was either Patrick or Paddy) was excellent and really brought the information to life in interesting ways, which can really make or break experiences like this. By the time we finished, I saw a lot of similarities between this and 97 Orchard Street in NYC (another excellent museum) and I’m really glad we paid it a visit. Between the excellent tour guide and the very reasonable ticket price (€9/$10 USD), this is must-add to any Dublin itinerary.

Thankfully, this museum encourages you to take as many photos as you like, so I have several to share.

Looking up at 14 Henrietta Street. 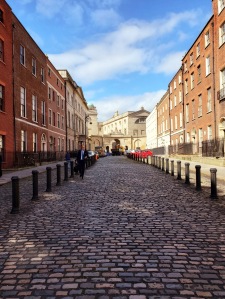 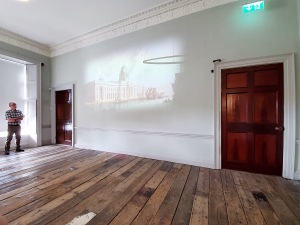 Watching our first short video, with our guide to the left.

An imposing mahogany bed, currently on a five-year loan to the museum.

Our tour group in a hallway that looks largely like it did hundreds of years go. Note the blue color (Reckitt’s blue) on the top and the red (Raddle red) on the bottom of the walls, which was very normal for the era.

Some handwritten graffiti from the building’s tenement era in that same hallway.

Although the spindles in the staircase railing aren’t original, the rails are. Note the metal bumps on the railing, which were installed to keep children from sliding down.

Accomodations in the basement, which would have had a packed-dirt floor and would have been endlessly cold.

We heard memories of children from the mid-20th century in this room. One of the coolest aspects of this museum is that it’s built around not only the physical building, but also the stories and memories of people who lived there (and their descendants).

This apartment is done in a style of the final years of the building (1960s/70s). 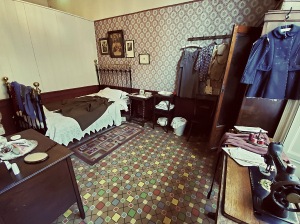 For some reason, I found this shelf of bric-a-brac in the kitchen (which still didn’t have running water in the 1960s/70s) endlessly interesting.

A panorama of the apartment to give a sense for the whole space. Remember the whole family would have lived in this space, the bedroom, and the kitchen (though thankfully families wouldn’t have had 17 people in them by this era).

After such a great experience at the museum, we made our way to St Michan’s Church, though we ended up detouring for lunch shortly after we got there as we had just missed the window for tours. You can only see this church (and its crypts) via guided tour and we were a little over an hour out from the next tour window opening, so we opted to grab lunch to kill time (and because I was hungry). A quick look at Google Maps revealed we were just a few minutes’ walk from The Brazen Head, so we walked over, though we didn’t realize until we arrived that it’s Ireland’s oldest pub, dating back to 1198. It was good eating-outside weather, so that’s what we did, enjoying a chorizo and mozzarella sandwich (me) and chili (Scott). The food was fine and the service was so-so, so I can’t say I would go back, though it was neat to eat in a local landmark.

Our lunch ended just before the next tour window at St Michan’s, so we walked back over and only had to wait a few minutes for the guide to open the doors. When we were outside in the small graveyard, I got deja-vu vibes and once we actually walked inside, I became 100% sure that I visited on my trip here nine years ago. It’s not a big church, but I immediately recognized the interior (not that I minded going again today). There isn’t a lot to see inside the church, but you’re free to walk around it once you’ve purchased your €7/$8 USD ticket, while you wait for the tour guide to give you all the relevant info. That info is focused entirely on the crypts below the church, where you get to see actual mummies and coffins, which is kind of cool (or morbid, depending on your viewpoint). As crypts go, they aren’t too cramped (though beware the occasional low ceiling), so even if you don’t love small spaces, you might be okay here. Since seeing mummies isn’t an everyday thing for most of us, St Michan’s is worth a visit, though be sure to check the tour schedule to make sure you can get in.

Are you my mummy?

Lunch view at The Brazen Head.

Looking up at the church tower.

The final resting place of the Sheare brothers, who were executed by the British.

After our tales from the crypt(s), we made our way to Dublin Castle. This is another castle that isn’t quite as interesting (to me, anyway) as it’s basically a government building. As mentioned above, it was home to some minor royalty once upon a time, but doesn’t have any strong royal ties these days, though it did host Queen Elizabeth II when she was here in 2011. In addition to the day-to-day government operations that happen there, it also hosts the occasional banquet, foreign affairs events, and is where the President of Ireland get inaugurated every seven years. So it’s not without a notable past, but just not as interesting a past as other castles, perhaps. Our visit today was made more interesting by the fire alarm that went off while we were there though! It was an interesting experiment at first because no one really did anything – we just kept walking around and snapping photos, as you do. Finally though, after a good few minutes of the alarm going off, we were told to evacuate, but that we could come back in as soon as things were clear. We were outside for maybe 15 minutes and it didn’t seem like anything was actually on fire (we were told everything was fine when we walked back in), so we finished the last few rooms and were on our way. 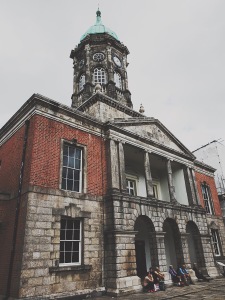 Walking into the castle. 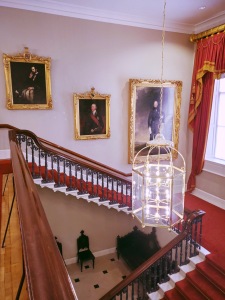 It did have a nice, grand staircase.

Followed by a grand hallway!

The Birth of Modernism in Irish Art is an exhibition currently being hosted in the castle and I quite liked this painting from it. 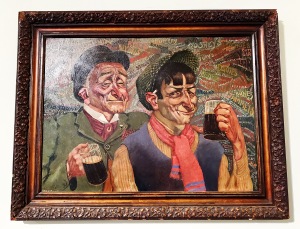 Well isn’t this a grand room?

The former throne of the Viceroy of Ireland.

This room is very blue!

This chair is used for the presidential inauguration.

A view outside Dublin Castle. 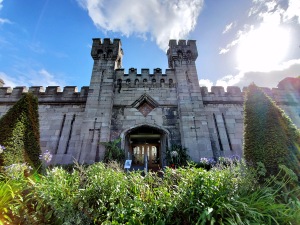 The Coach House looks elegant from the outside, but on the inside it’s…a conference center and exhibition space.

And with that, our second-to-last (full) day was in the books! We didn’t have a late night, but we were happy to chill in the apartment this evening. Thanks to our nice Brazen Head lunch, we weren’t feeling too hungry for dinner, so I can’t say we’ve experienced a ton of restaurants in Dublin. Maybe we’ll hit a good one (or two) tomorrow? Come back to find out!