I’m starting this post very early! I’ve had a pretty low-key day (though I’ve still done lots of walking around, according to my step tracker), but I’m back in my hotel lounging for a bit before going out again later. More on that shortly!

I really didn’t have anything planned when I woke up today (shocking, I know), but it was nice to wake up (around my usual time of 8 AM – I’ve been pretty consistent on this trip!) knowing my latest blog post was already done and that I didn’t have anywhere to be. Not that I’ve had early starts that rushed me out of the hotel each morning, but I’ve either had someone to meet (Matt!) or somewhere to go every day so far, so I had to keep to at least a bit of a schedule. As I’ve said before, this is why I never worry about having many solid plans coming into my London trips – plans always seem materialize. 🙂 To be fair, I did actually want to get going so I could make a stop at TKTS when they opened at 10 AM (seeing another show tomorrow!) and also wanted to pick up some tea at TWG Tea for a friend back home, which is just around the corner from TKTS. I easily checked both off the list after breakfast before going on with the rest of my day, which admittedly wasn’t super busy.

What’s that? You’re still waiting for me to tell you what show I bought a ticket for? Well, come back and read the next post to find out. 🙂

Now, getting back to today, I did a lot of walking, a little bit of shopping, and visited one museum. After my ticket and tea stops, I decided to make a return visit to Fopp to make sure I didn’t miss anything the first time I was there (which was Thursday, while I was walking around to keep myself awake while waiting for my room to be ready). I did think long and hard about a couple of titles, but ultimately left empty-handed. There were definitely a couple of other titles I bought online not too long ago that I should have just waited to buy when I was here, but such is life. Now I don’t have to schlep them home with me! I also made a stop at the nearby Forbidden Planet (literally a couple of minutes from Fopp), where I always love browsing, not just for Doctor Who stuff, but also for the variety of other stuff they carry, like great horror books. I was actually looking for something this time (a new Doctor Who CD) as I would normally have bought it online, but knowing I was coming here, I held off to see if they might have it (so basically, the opposite plan I had for Blu-rays) and of course…they didn’t. Oh well! Based on the prices of similar CDs, it looks like I’ll save money buying online anyway (though I happily would have bought it had FP had it). Despite making no purchases, I still enjoyed browsing!

I made a quick return trip back to the hotel to drop off my tea purchase and also to switch to a lighter coat (my weather app made me think I’d need a thicker coat, but reality told me otherwise) and while I was there, I did some quick googling to see if I could find any unique, new-to-me experiences to try. Perhaps ironically, I found not one, but TWO for tomorrow (you know the drill – you’ll read about those later), while only finding one for today. That one was a new-to-me museum, Leighton House. It’s a smaller museum, the former home of Frederic Leighton, who commissioned the design and build of the house, which also contained studio space as Leighton was a painter. Completed in 1895, it’s a neat space filled with paintings and lots of interesting architectural and design elements, though I was a little surprised at how quickly I went through it. There are a few rooms on the ground floor and another couple the next floor up, and that’s it! The house also boasts a garden visitors can walk through, but it’s only open through the end of September, so I was only able to peek through the gate at it (not much to see in a garden in mid-November anyway). At £9/$11 USD, it’s not particularly expensive, and if you’re at all interested in architecture or just enjoy strolling through old homes with lots of paintings, you’ll enjoy it. Also, it’s in Kensington and Chelsea, so if the weather is nice, you’re practically guaranteed to enjoy the quaint streets and elegant homes as you walk around. So pay it a visit!

Speaking of walking around, I did just that after my time at the museum, though to be fair, my walk was directed towards The Scarsdale Tavern as it was about 1245 PM, making it an ideal time for lunch. I chose this pub at random (thanks Google Maps), but it was a nice one! I arrived a little to early to eat (the kitchen didn’t open until 1 PM), so I ordered myself a cider, which I enjoyed while watching a lady who appeared to be in her 80s feed potato chips (crisps for my UK friends) to her little dog. Although there weren’t many people there when I arrived, it definitely got busier as I could see more and more people coming in from my spot in the corner by the bar. I wonder if it’s a popular lunch spot for locals? I wouldn’t be surprised if it is because the food was good! Although it took awhile to get it after I ordered, the chicken pesto sandwich and fries (chips for my UK friends) were super fresh and really tasty. And super cheap, too – the meal was only £7.50! I really enjoyed this pub and would go back!

By this time, I knew I was likely going to head back to the hotel soon for a little downtime before my evening plans (thus also giving myself time to write this post), but I realized I was super close to the Earl’s Court police box! As that’s another place I visit on pretty much every trip and because it’s directly in front of a tube station I could use to get back to my neighborhood, I walked over and took a few photos. I’m always interested to see if anyone else is taking photos of/with it as they’re almost guaranteed to be Doctor Who fans, but no one else was there this time. But that made it easier for me to take my photos and be on my way.

At last, the photos!

I like the hippy-dippy look of this place, which is across the street from my hotel.

Goodge Street is my local tube station, though both Tottenham Court Road and Warren Street are also really close. 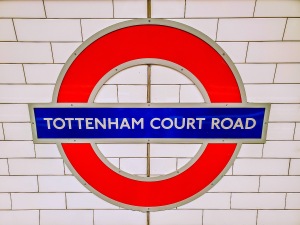 The Tottenham Court Road logo always makes me think of my first UK trip in 2003, when I posed by one with my friends Zoe and Cory. 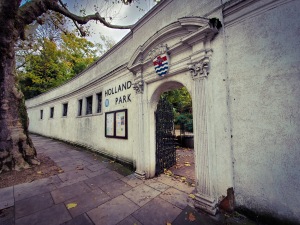 Walking through Holland Park for the first time.

I found this fellow in the park. 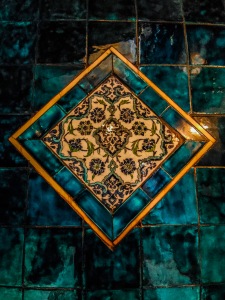 Always remembering to look UP.

More great tiles around this fireplace. 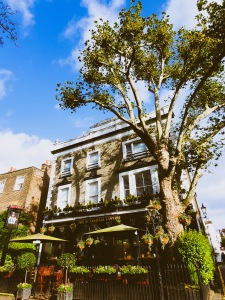 Outside the pub in the bright sunshine. 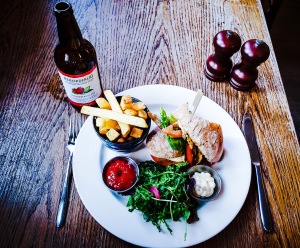 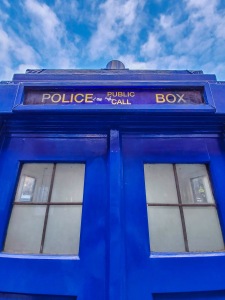 The windows are all wrong.

And of course, a selfie. 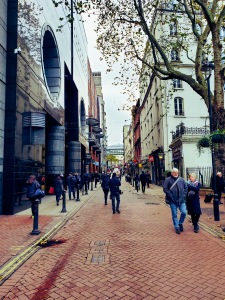 A shot of Villiers Street coming out of Embankment Station.

After chilling at the hotel and writing all this, I was excited to go meet my good friend Steve! We’ve known each other for nearly 20 years, have traveled together, and see each other periodically at a few different Doctor Who conventions, but he lives in Brighton these days, so I don’t always get to see him on my UK trips unless I include a Brighton stop. I texted him when I got here last week and he said he could come up for dinner tonight, so I happily took him up on that. Since he came from Brighton (same as Matt), he came the same station (Victoria) and I was hoping to meet him there, but direct service there from my nearby station (Warren Street) was suspended due to escalator work – ugh! We changed plans to meet up at Tottenham Court Road instead and then walked to nearby Soho for a drink. It was so good to catch up with him! It’s been close to two years since I’ve seen him and we only see each other periodically (usually at conventions) to begin with, so I’m happy it worked out for him to take the train to London (his first time here for a couple of years, he said!). We migrated from pub to restaurant (Il Conte in Soho for pasta) and then to another pub (Retro Bar!) for a final drink before we went our separate ways. Hopefully it wont be so long before we can meet up again!

Cheers to 19 years of friendship!

My head is slightly elongated here, courtesy of the 3D photo Steve was trying to take of his dessert.

So although I didn’t start with many plans and I don’t feel like I “did” a whole lot today, I end my day feeling like I did. Between the walking, shopping, museum’ing, and hanging with Steve, it was another good day (with more good weather to boot). Tomorrow is (already!) my last day here (sad music), but I already have no fewer than three things planned, which you shall find out about……