It’s now March! How did that happen?! I mean, other than the normal passage of time, that is. I’ve been home from another excellent Gallifrey One for a couple of weeks now, but I wanted to drop one more post about my last post-convention day, plus the journey home.

When it comes to Gally, I reliably arrive on the Wednesday before (as many of us do), but the day I go home changes between either the Monday or the Tuesday after the convention ends on the Sunday. This year, I went home on Tuesday because I knew some of my friends would be around on Monday, plus the fact that the flight was a little cheaper thanks to Monday being a holiday (Presidents’ Day isn’t perhaps the biggest federal holiday, but it’s a holiday nonetheless). There are definitely benefits to going home on the Monday, but it’s also really nice to go home on Tuesday as that gives me a day to relax (hopefully in nice weather) after the busyness of the convention before flying home. And this year, the weather definitely played in our favor (as it did for the duration of the trip), so it was even more amazing to have the extra time.

Although some of my friends did fly home on Monday, the group of us that stayed around (including me, Felicity, Matt, and Jason) enjoyed a relaxing morning of breakfast and lounging around the hotel before deciding to head out to Manhattan Beach for the afternoon. Manhattan Beach is a place we’ve certainly been to before, but going there after the convention has turned into a bit of a tradition for me, Matt, and Jason, at least when all three of us are at the convention together (although I’m there every year, there have been some years where one of both of them weren’t able to make it). Needless to say, the three of us were happy to walk around by the beach in the sunny weather and Felicity was happy to join our trio. 🙂 As with previous years, we caught a Lyft to Manhattan Beach and then spent some time walking down the pier (not as fun/big as the Santa Monica Pier, but still nice), enjoying the sun and watching the swimmers and surfers. We even managed to run into a few convention guests who had the same idea we did!

Post-pier, we stopped for a late(ish) lunch at Brewco, which is right by the beach and is somewhere I’ve visited with Matt and Jason at least a few times in the past, so it too has become a tradition. 🙂 There’s nothing particularly amazing about the food, but it’s certainly tasty and they have some nice drinks, so that, combined with the fabulous weather and proximity to the beach, make it a solid choice every time we’re in Manhattan Beach. We had a fun time chatting, drinking some house cocktails, and enjoying some tasty appetizers. Not a bad way to spend an afternoon! Of course, we eventually had to move on, so we meandered through the small(ish) downtown area near the beach (just around the corner from Brewco), stopping into a bookstore for Matt, and then walked about a mile to a nearby Target to pick a few things up. There was nothing out of the ordinary with our day, but it was a lot of fun and felt like the perfect way to wrap up a fun weekend.

Only a few photos, but enjoy them anyway. 🙂

Watching the waves, swimmers, and surfers from the pier.

Endless ocean as seen from the end of the pier.

Looking back towards the beach and allllll the houses. We were all very jealous of the spectacular ocean views those residents get.

The rest of that final (full) day was pretty chill – we had some dinner in one of the hotel restaurants as the general malaise (AKA post-convention blues) started setting in. After being in a hotel FULL of Doctor Who fans, costumes, guests, etc., everything feels kind of empty on the Monday, when many people have left, all the convention stuff has been taken down, and you don’t randomly see people in fabulous costumes walking around. In my early convention-going days (starting with the first Chicago TARDIS in 2000, but particularly when I started going to Gally in 2002), I always felt a lot of sadness/letdown at the end of a convention. As someone who grew up before technology and social media made finding other Doctor Who fans easy-peasy, watching this show was something I could only enjoy alone. Yes, one of my brothers watched, but not as religiously as I did and I truly didn’t know ANYONE else who watched it, so when I got online (around 15-16 years old) and started (virtually) connecting with so many other people who loved Doctor Who like I did, it was amazing. Unsurprisingly, meeting some of those people (and many others) when I started going to conventions was nothing short of magical at first! So for at least my first several conventions, there was always a comedown after all the fun was over, very similar to the comedown many people feel after the Christmas season ends. For those first several conventions, the big reason for the comedown was the lack of social media, so while we were able to connect with each other via message boards and newsgroups (remember those?? :D), we didn’t have the constant connections and immediacy we get through things like Facebook today. With all that said, the fact that we DO have social media in the far-flung future of 2020 makes modern post-convention comedowns less dramatic and easier to get over because I stay connected with these friends throughout the year. But I’m still always a little sad to say goodbye to my friends, especially knowing I won’t see some of them for another year.

Don’t think we didn’t make the most of our last evening though! After that final dinner, we spent the evening playing cards (specifically Skip-Bo, which is always fun with a small group of people) before we all retired for the evening. That brought back happy memories of playing cards at previous conventions, going allllll the way back to the first time (as far as I can remember) I played cards at a convention, which was during the first Hurricane Who back in 2010. That’s a story for another day, but suffice it to say that our group (which, at that convention, was me, Jason, Ruth Ann, and another Jason from Minneapolis) had a LOT of fun, despite many flaws with the hotel. Any convention where I get to play pool and Phase 10 with BBC TV’s Louise Jameson is a memorable one. 😀

What, you thought I wasn’t going to take a photo of us playing cards?

Before long, we all said our goodbyes and retired to our rooms (except for Jason, who had to catch his red-eye flight back to Philadelphia) for one last night at the LAX Marriott. But eventually, Tuesday morning arrived – booooooo. As I said above, Mondays are quiet, but in the morning at least, there are a still a lot of convention goers hanging around the lobby, soaking up the last bits of geekery before flying home. On Tuesday morning though, it’s like the convention didn’t happen! Not only is all the con stuff packed up for another year, but most of the people you see around the hotel aren’t convention goers anymore, so that makes flying home on Tuesday a little more depressing. Thankfully, my flight didn’t leave until 1 PM, so I had plenty of time to get ready, finish my packing, and get to the airport. And no waking up early! Although goodbyes used to be a bigger deal for me (see above’s comments about post-convention comedowns), I now try to make as quiet of an exit as possible, lest I get caught in an endless loop of saying goodbye to people in the lobby (especially when I leave on a Monday). I timed my arrival in the lobby perfectly for the arrival of an airport shuttle, so I slid out and into the waiting shuttle, officially closing another year (my 19th!) at Gallifrey One.

My travel experience back home was pretty flawless. I had an easy-breezy time getting my bag checked and getting through security (I’m constantly happy with my decision to get Global Entry/TSA Pre-Check all those years ago) and decided to relax in the Delta Sky Club before my flight. As a Delta AMX cardholder, I can buy my way into the lounge for $39, since I don’t have automatic access through Delta status. I don’t do that every time I travel (though the times when I’ve flown business class internationally, I get in for free with a business class ticket), but after a weekend of fun and lots of people, it was nice to decompress in a quiet space without lots of airport noise and distractions. And, as I did for the flight to LA, I booked myself a comfortable, first-class seat for the flight home as well. As I always say, flying is ultimately just a way to get from A to B, but it’s a nice bonus when you can do it in comfort. 🙂 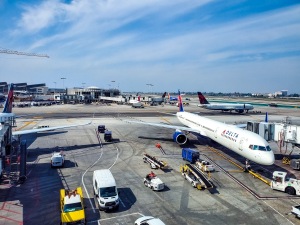 Checking out planes from the Skyclub. 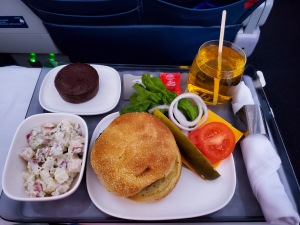 No breakfast on this afternoon flight, but I did get a pretty tasty burger for lunch!

A safe arrival back in Minneapolis officially ended this trip! Annoyingly, Delta took their sweet time getting bags sent down, but mine eventually arrived, safe and sound. As always, the trip was fabulous, but it was great to get home to Scott. I’m now in the looooong stretch of time between conventions, with the next one not happening until Chicago TARDIS in November. Never fear though – I’ve got a spring break trip to the Gulf Coast coming up later in March (just like last year) and another UK trip in early August, plus more as-yet-to-be-planned trips. And I still have some Travel Throwbacks to write, too!