It’s nearly 11:30p on Friday night here, which can only mean one thing – time to write another blog! Today felt like a pretty busy day because we saw and did quite a few things. As I mentioned in my post earlier today, the weather was a bit iffy this morning, but after getting sprinkled on a little bit, the sun came out for awhile and the rest of the day was pretty good after that.

Although we planned to start our day at the Conciergerie, we decided to go to Café Varenne first since it’s not far from our apartment. We debated eating there, but since Ina’s recommendation was based on their breakfast food, we decided to hold off so we could go another day (it was already around noon by the time we got there). Luckily, there’s a bakery right across the street, so we popped in there and picked up a croque monsieur and an éclair (both were amazing!). From there, we headed towards the Conciergerie, but ended up going to Notre Dame first. I had visited Notre Dame on my previous trip to Paris in 2007, but it was nice to see it again. While the cathedral itself is free to get into (win!), you can choose to pay for an optional trip up to the very top of the building. That tour is one of the many things covered by our Paris Museum Pass, so we went for it! This tour actually had more steps than the Belfort in Bruges – about 380 in total! And, of course, there’s no elevator. Travel tip – be sure to check on tours like this ahead of time or, at the very least, read the signs/warnings around the attraction so you know what you’re getting into. You don’t want to get 100 steps in and need to turn around! Since the weather had cleared off from the morning rain, the views from the top were great! From the top of Notre Dame, we moved to the bottom to visit the Crypte Archeologique du parvis Notre-Dame. This is a quick, but interesting, attraction that details the architectural development of the center of Paris over hundreds of years. Cool stuff!

After Notre Dame, we moved on to the nearby Conciergerie. To be honest, I didn’t know a whole lot about this one and it was relatively unimpressive at first (you walk into a big, empty room initially), but it got better as we walked through it more. It was neat to see the cell Marie Antoinette was held in leading up to her execution (though the cell that’s there now is a recreation of the original one) and interesting to learn about who else was held there and how justice was carried out when the Conciergerie was in use.

After focusing on mostly indoor stuff, we decided to have a wander through Le Marais, which is the really “Paris-looking” part of the city, full of winding streets, random shops, little bistros, and more. We walked around some of the streets, stopped for some ice cream, and spent some time just sitting in the Place des Vosges, which is apparently the oldest square in Paris. It was a great place to relax, watch kids play, and just listen to Parisians living their lives. I highly recommend a stop here the next time you’re in Paris!

Of course, we had to try and see one more thing, so we visited the Bastille before we took the Metro home. Although a huge prison once stood on this spot, it’s now a big roundabout with the Colonne de Juillet standing in the center. Not a whole lot else to see, but it’s a nice place for a photo! 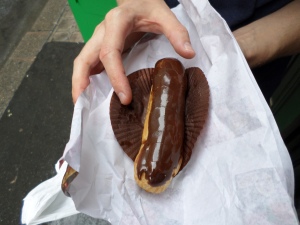 Delicious éclair from the bakery across from Café Varenne. 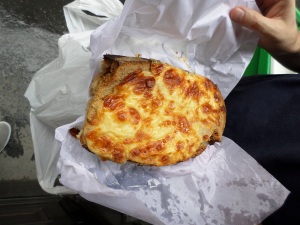 Don’t worry – we also had an amazing croque monsieur at the bakery. 🙂 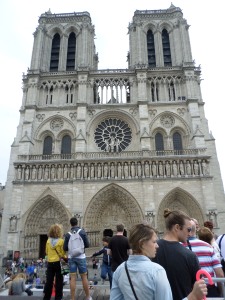 I love this view! 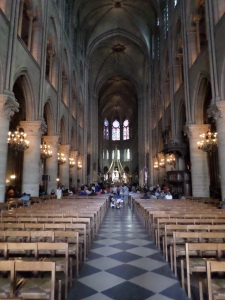 Looking towards the altar of Notre Dame from the back of the church. 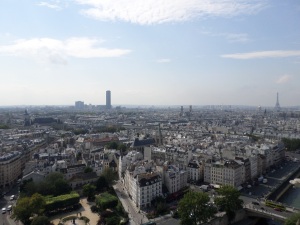 The view we got from the top of Notre Dame (after a 380-stair climb, of course). 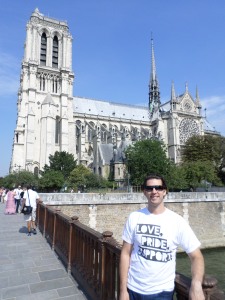 Me and the church. 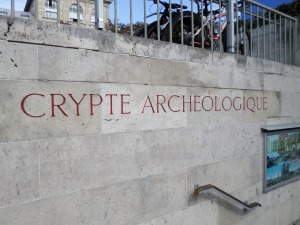 The crypt just in front of (and underneath) Notre Dame. 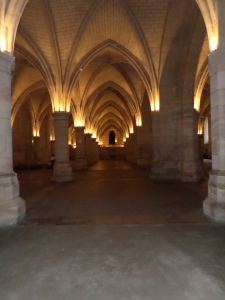 The first room we walked into at the Conciergerie. 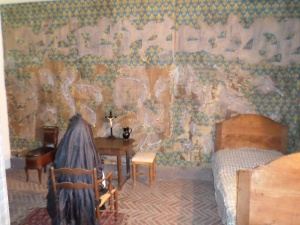 The (reconstructed) cell of Marie Antoinette. 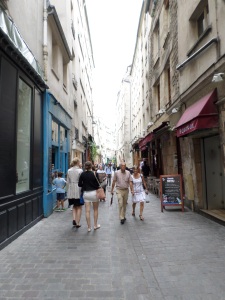 One of the windy streets in Le Marais. 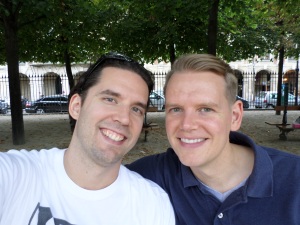 Scott and I in the Place des Vosges.

Panorama of the Place des Vosges (click to see the much larger version). 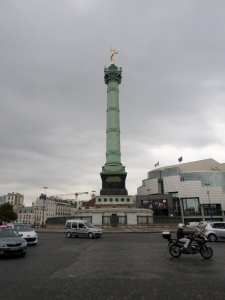 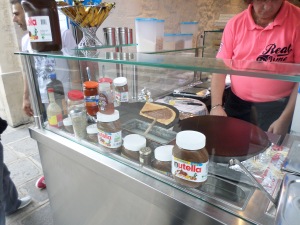 Okay, we may have also had a crepe today. This guy’s crepe-making skills were second-to-none!

Wow, that was a big picture recap! After taking all those pictures (and more!), Scott and I came home, relaxed, and planned dinner. We opted to go to L’Ebauchoir, which was suggested to us by a reader of this blog (thanks Ting Ting Styling!). It was easily reached via the Metro and had great service and great food. Although they don’t have English menus, the friendly staff all spoke good English, so we had no problems. The neighborhood seemed a little sketchy (we didn’t have dinner until almost 9p, so it was already dark), but I would still recommend a visit here.

Tomorrow, we’ll hopefully have that elusive breakfast at Café Varenne and will be heading to Versailles after that. It’s after midnight now, which means I’m in danger of turning into a pumpkin, so I bid you au revoir for now. Until tomorrow, at least!