Our fifth day in Mexico didn’t actually turn out to be that great because the one thing happened that you never want to happen on a beach vacation. It RAINED! We were able to enjoy most of the morning, even though it was on the cloudy side and there were some sprinkles a few times. When you’re in the pool or laying next to it, a few sprinkles don’t matter all that much. However, those sprinkles quickly turned to some cloudburst-like downpours, so we decided to pack things in around 1p. We figured we would just take the day off, as it were, and just hang out inside, chatting, playing games, etc. Although it didn’t end up raining for too long, the wind was still pretty strong and the clouds were relatively heavy, so I’m glad we packed it in when we did.

So what did we do? Well, Scott and I treated ourselves to a bit of room service. Although things at the Sens aren’t perfect (look for my forthcoming detailed review for more on that), their guacamole is really good, so we really enjoyed ordering some of that in the room! And of course, we shared with our friends. 🙂 We also chatted and played a bit of Catchphrase. Later in the evening, we went to the Moroccan restaurant at the resort (Al Sur) and enjoyed a seven-course tasting menu, which was really tasty. Surprisingly, there aren’t any great common spaces to use in the evening because the lighting in the lobby is really dark and most everything else revolves around being outside, which isn’t much fun at night. There is one random, well-lit living room-type space just off the lobby though, so we hung out in there after dinner, chatted more, and played some cribbage before turning in. All in all, it was a good day, despite the rain.

Our sixth day is shaping up to be a good one, as you can see here: 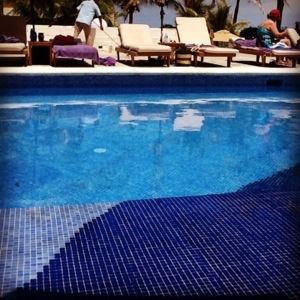 Yep, still in the same spot by the pool!

Can’t believe the trip is coming to an end soon! No time to think about that though – we still have the rest of today and all of tomorrow to enjoy first.