Berlin is shaping up to be a great city to visit! While neither Scott nor I have gotten a “this feels like a place I could live” vibe (like the one I get in London, for example), we’re having a good time seeing all the sights. And the almost-perfect weather has been a bonus! Obviously you take a gamble with weather whenever you travel, but we’ve definitely enjoyed some pretty great weather since we’ve been here. Which was especially important today, since it felt like we did a ton of walking around (my Fitbit tells me I was close to 20,000 steps today, so yes, a lot of walking)!

Armed with the list of places we wanted to see, we strolled down Unter den Linden on our way to the Brandenburg Gate, one of the most popular sights in Berlin. Although built in the late 18th century, it became a symbol of unity after the reunification of Germany in 1989. It’s a great spot for a picture (see ours below), so be sure to wander over there the next time you’re in Berlin.

Our stroll continued, leading us to the Reichstag building, which is just a short distance from the Brandenburg Gate. Although the building is the meeting place of the German parliament, it’s also a big tourist attraction and houses a large dome, rooftop terrace, and restaurant. Because we had already seen great views of the city from the TV Tower, we opted not to go into the dome, but if you do go, take note – you must pre-register at least two days ahead of time to get in. Although you can try to visit on the spur of the moment, you still have to sign up and there’s no guarantee there will be any spots available that day. Plan ahead!

Turning around a bit, we headed towards the Memorial to the Murdered Jews of Europe, which is between the Brandenburg Gate and Potsdamer Platz (more on that second one in a moment). This one is interesting because the memorial consists of 2,711 concrete slabs of varying heights that you simply walk around through. They aren’t inscribed with names, dates, or anything like that and it’s said that there’s no implied symbolism to the slabs, so we as the visitors are just left to ponder on that for ourselves. There’s a separate information center you can also visit for more background though. Given the fact that it’s free and is in an easily-accessible location as well as the importance of memorializing such a huge loss of life, I recommend paying it a visit.

Another short distance away (maybe 500 meters), we found ourselves in Potsdamer Platz. Once a very important part of Berlin, it was mostly destroyed during World War II and all but forgotten due to the placement of the Berlin Wall. It has regained its importance since the reunification of Germany and is once again a highly-developed, bustling intersection. It also contains a display about the Berlin Wall, including sections from it. It was very interesting to learn more about the wall and to see more of it in person, so be sure to visit. Although we were there during the day, the way it’s lit up at night is supposed to be pretty cool, so make it an evening visit if you can!

Our next stop was the Topography of Terror, which came recommended from a couple of friends. Although it includes both indoor and outdoor components, we focused on only the outdoor one, which includes the longest section of the Berlin Wall which was never demolished. The exhibition that runs along a trench below the wall details the German approach to Poland during World War II, as well as some of the pre- and post-war history of Poland, specifically Warsaw, and how it rose from the ashes. Being Polish myself, I particularly identified with the exhibit and found it very interesting. And the exterior portion is free, so there’s no reason not to go, really.

Literally steps from the Topography of Terror is something far more light-hearted – Curry at the Wall. We stopped for a quick lunch of currywurst and chips (fries, that is) – delicious! I’d never had currywurst before, but it was very tasty! With bellies full, we made our way to one more destination – Checkpoint Charlie. While it serves no official function today, in the days of the Berlin Wall, it was a well-known crossing between East and West Germany and represented a dividing point between two halves of the world. As with any touristy site, there are lots of touristy things around it, including people dressed in MP uniforms who gladly take a picture with you…for a price. Just avoid them. 🙂 Next to the checkpoint is the Checkpoint Charlie Museum, which we heard was very detailed and worth the €12.50 entry fee, so we decided to visit it. The museum is indeed very detailed, but the flow of it is a bit odd in that it doesn’t always seem to have one! Still, there’s lots of good information, letters, exhibits, etc. about the separation between East and West Germany. It’s odd to think that Germany only became a united country again in 1990 – very much in my lifetime. There’s some good education to be found in this museum, so along with everything else we did today, I recommend it to anyone visiting Berlin.

After all that reading, are you sitting comfortably? Let’s review some pictures then.

The world clock in Alexanderplatz, which is near our apartment and we passed by on our way to the Brandenburg Gate.

I really loved seeing the Dom from this angle, with the TV Tower in the background.

This is the Altes Museum, right next to the Dom. We didn’t go in, but I had to get a picture of the building anyway. 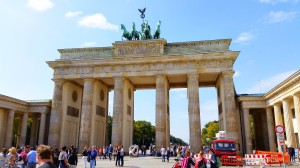 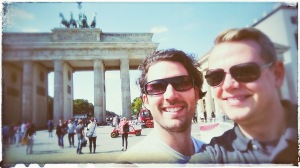 Me and Scott at the gate.

A gorgeous, shaded walk between the gate and the Reichstag. 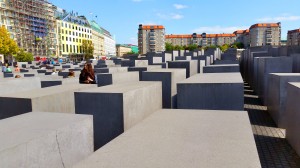 The Memorial to the Murdered Jews of Europe.

A panorama of the longest still-standing section of the Berlin Wall. 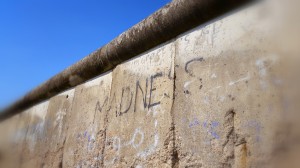 Madness. Sums up the Berlin Wall and many of the policies and approaches of the East German government. 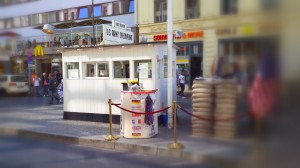 I loved this view of old and new together in the same shot on our walk home.

After resting our weary bones (hey, a day of walking around a city like Berlin would make anyone’s bones a little weary!) and some discussion about dinner, we decided to walk back to the area we had dinner in last night because it looked like there were some other good options there. After comparing a few menus, we found a great Italian place with an open table outside, so we went for that. After enjoying some very flavorful focaccia, pizza, and lasagna, we came back to settle in for the night. Tomorrow is our last full day in Berlin before we move on to Prague on Friday. We’ve already seen a lot of what we wanted to in Berlin, but somehow I think we’ll be able to keep ourselves busy. 🙂

Berlin, Your Time is Ending