It felt like we packed quite a bit into our first full day in Berlin! Working from our list of things we wanted to do, we grouped together things that were in roughly similar geographic areas. Sounds pretty basic and some may argue unnecessary, but that basic planning makes it way easier for us to see lots of stuff in each of our destinations.

First up, the Hackescher Markt and the adjacent Hackesche Höfe, a market area in central Berlin (or Mitte, as it’s known). There honestly wasn’t a whole lot for us to do here, since neither of us are into shopping. They do host a big flea market two days a week and that could have been interesting, but today wasn’t one of the days it was being held, so we just strolled through briefly and continued on to our next destination, the Neue Synagogue. Scott knows a couple of people who live or have lived in Berlin who gave us a tip that the interior of this particular synagogue wasn’t of big interest for the price (€7, I believe), so we settled for snapping some pictures on the outside. While not as impressive as the Dohány Street Synagogue we just saw in Budapest, it’s still a pretty cool-looking building. At least give it a walk-by when you’re in Berlin!

Two sights down, but we hadn’t really done much yet, right? Well, we decided to head towards Berliner Fernsehturm (TV Tower). The look of it reminded me of the BT Tower in London (which you can’t go to the top of) and of course it’s a tourist trap, especially with a bar and restaurant at the top by the observation deck, but we had to give it a try. You can pre-book tickets on their website, which we were originally going to do the night before, but opted not to. It was easy to buy tickets on-site though and we only had to wait about 15 minutes to get in. When you buy your ticket, it comes with a ticket number and those numbers are grouped together and listed on screens throughout the facility. The screens tell you exactly when each ticket group should line up to get to the elevator to go to the observation deck – easy! I don’t know if the wait is always as short as it was for us, but if you’re nervous, you can always pre-book for a specific time (though choosing a specific time will cost you more, so buyer beware). The views of the city from the observation deck were great, so I recommend a visit!

After spotting the Berliner Dom (Berlin Cathedral) from the TV Tower, we decided to pop down to it and have a look. As with the synagogue, it didn’t feel like it was worth the €7 entrance fee, but you can certainly decide that for yourself when you visit Berlin. Regardless, the outside is gorgeous and it’s situated right next to the Spree River, which is a nice place sit and people-watch. Right around the corner from the Dom is the DDR Museum, which we decided to pay a visit to since it was so close. We stopped for a quick lunch first though – a great sausage (not sure what kind) and a cheesy pretzel. Yum! A cheap, on-the-fly lunch is fine by me. 🙂

The DDR isn’t a big museum and it’s very busy (at least it was when we were there), but it gives an interesting insight into what life was like in East Germany (AKA the German Democratic Republic or, in German, Deutsche Demokratische Republik, hence the name of the museum). There are no guides and you’re encouraged to touch and interact with the various exhibits, so be prepared to lead yourself through it. Worth the €7 entry fee!

We couldn’t come to Berlin and not visit the Berlin Wall (what’s left of it, anyway), so we walked the two-or-so miles to the East Side Gallery. Although it had rained overnight and the morning was mostly grey, the weather was sunny and not too hot for the rest of the day, so we didn’t mind the walk! Berlin does have great public transport options though, so be sure to check them out when you’re planning your own trip here. Upon reaching the remains of the wall, it was sobering to realize the division it once created and also sad to realize that most of the original paintings on the wall have been covered by graffiti. However, the wall is interesting in and of itself as is the variety of street art that covers it. And you could argue that the graffiti is an expression of the freedom that wall once prohibited, so it can’t be all bad. Don’t miss the chance to miss seeing this piece of history!

We came back to our apartment for a rest at this point in the day, so I think it’s only fair you get a rest from reading now, too. Ponder on some photos instead! 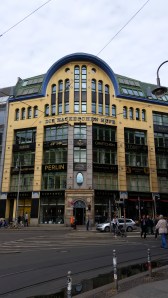 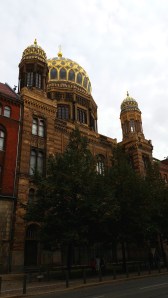 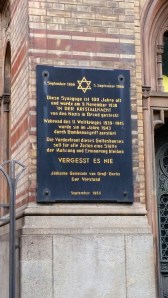 The plaque outside the synagogue. 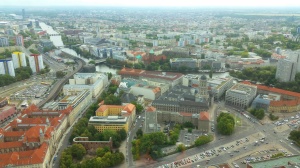 Great views from the TV Tower!

Another view, with the Berliner Dom visible near the upper-left section. 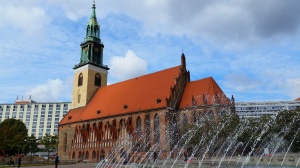 We passed by St. Mary’s Church on our way to the TV Tower (it’s right in front of it).

More of the Dom, this time showing its proximity to the Spree.

An East Germany jail cell exhibit from the DDR Museum.

Our first glimpse of the Berlin Wall and the East Side Gallery.

A nice shot showing a large section of the wall.

I thought this was a cool perspective of the wall.

I loved this piece of street art.

And this one, too! “I am fear defeated. I am my dream begun/realized.”

Although we did venture out again after putting our feet up for awhile, it was only to have a good meal at Zur Rippe. The food was very tasty and included beef roulade for Scott and pork schnitzel for me. Unlike last night, we called ahead to make a reservation, but it turned out we didn’t need it when we arrived. Oh well! Whether you make a reservation or not, I recommend this place for a good German meal. There were several locals there, which is almost always a good sign of the quality.

Now it’s tomorrow (okay, it’s only a little after midnight, but still), so it’s time to turn in. Berlin, see more of you soon!

2 thoughts on “Berlinin’ It Up”