It’s Sunday morning – our last full day in NYC! We had another good day yesterday, exploring more sights around the city and, of course, finding some tasty things to eat. As you do.

We started the day by heading over to the High Line, which is just a few blocks from our apartment. I’d never been there before, but it was really great! For those of you who aren’t familiar with it, it’s an elevated walkway and urban park built into a disused section of the New York Central Railroad that stretches for about 1.5 miles. There’s a great walking path, lots of lush plants and foliage, glimpses of the old railroad, and even food vendors. It’s a great place to take a stroll! As with the Brooklyn Bridge though, there are lots of people there, so be prepared for some crowds. Definitely pay it a visit the next time you’re here!

What better way to celebrate the end of a walk than by eating a giant doughnut? Okay, maybe not the conventional thing to do, but that’s what we did, at Doughnut Plant. Anyone who knows me knows that I love doughnuts and I happened to see something about this place on TV a month or so ago. They’re known for having all kinds of unique doughnuts, including square-shaped, filled doughnuts (meaning the filling goes all through the doughnut rather than just sitting in the middle of it). There are a few locations, but because we wanted to do some exploring in Chelsea anyway, we went to the one near the Hotel Chelsea as it wasn’t too far from where we left the High Line (there are multiple access points on the High Line). I must say, if you’re a doughnut connoisseur, pay this place a visit! The strawberry jam-filled treat I had and the mole doughnut Scott had were both great!

Since we needed to work off those doughnuts, we spent some time wandering around the historic part of Chelsea. The weather was sunny and warm (but not too hot), so it was the perfect time to take a stroll. That part of the city had a similar vibe to where we’re staying in the West Village – nice homes, quiet(ish) streets, but still in the heart of the city. We didn’t have any destinations in mind, but we saw some nice sights.

Check out the day in pictures below. 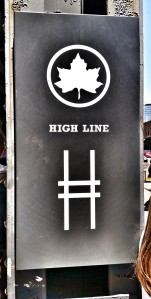 About to walk up the High Line. 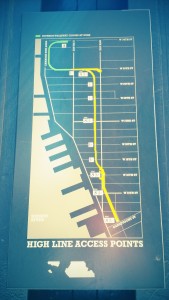 This map does a nice job of highlighting the entrances to the High Line. 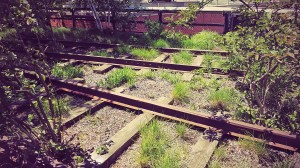 I love seeing the tracks buried under all the foliage. 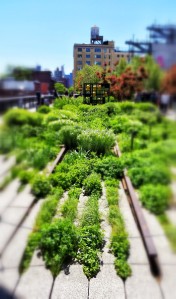 Another shot of the tracks. 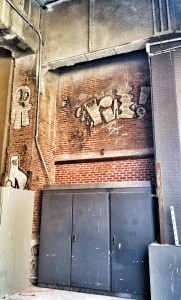 I don’t know if this graffiti is recent or really old, but I thought it looked cool. 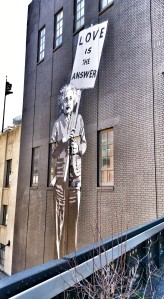 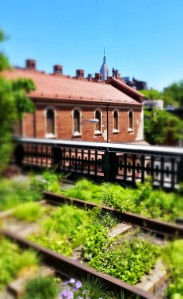 Another cool shot from the High Line, with the Empire State Building peeking out in the distance. 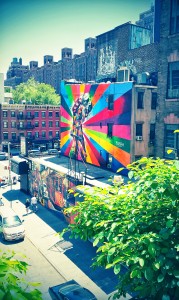 Another awesome painting seen from the High Line. Love the colors! 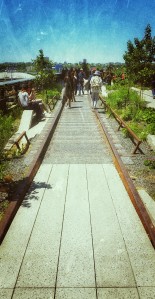 I’m curious if all the tracks are in their original positions or if some of them were moved/repurposed. 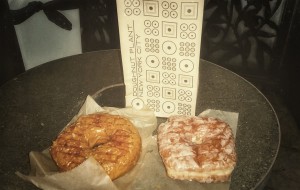 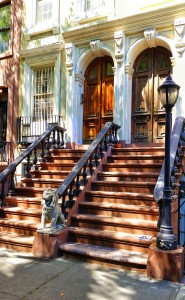 Another cool set of entryways seen while wandering around Chelsea. 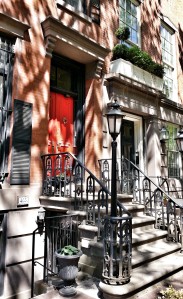 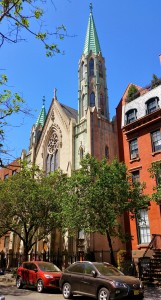 The German Evangelical Church in Chelsea. 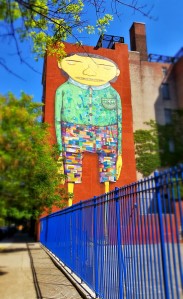 I loved this huge mural at the William T. Harris school in Chelsea! 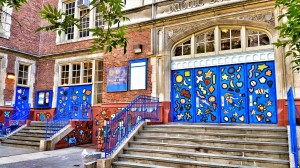 The front doors at the school were just as cool!

We relaxed back at our apartment for the rest of the afternoon before heading to dinner at Malatesta in the evening. It’s a cute Italian restaurant in the West Village that gets really good ratings, though I have to say we weren’t wowed. The caprese salad we shared didn’t taste as fresh as the one we had the other night and my pasta was pretty al dente (Scott’s was cooked perfectly though). They also only accept cash, so note that! We got there around 630p, which seemed to be the perfect time because we didn’t have to wait for a table, but by the time we left around an hour later, the place was packed. Time your visit right if you don’t want to wait!

After dinner, we may or may not have had another drink (or two) at the Cubbyhole in addition to strolling around the city more. A good end to a fun day!