Okay, I’m not leaving until tomorrow, but today was my last real day here and I have to wake up early enough tomorrow that it will still be today for all my friends back home, so close enough! As I’m sure you’ve heard me say (or seen me write – you know what I mean!) before, ending a trip like this is bittersweet, but I’ve had fun and I’m ready to be back in the States. And anyway, I’m not going straight home – I’ve still got Chicago TARDIS to look forward to! But before that fun starts, let’s run through today’s happenings.

First off, I opted not to see The Book of Mormon (or any other show) today. Not for any particular reason – the idea just didn’t grab me. Scott and I are going to New York City in a few weeks anyway and we may end up seeing a show while we’re there, so I can get a Broadway fix if I really want one. I did, however, make a return visit to Westminster Cathedral. The weather was much improved today (no rain once I left the house and intermittent sun, too), so I wanted to go up the tower to see what the views were like. They aren’t the best tower views I’ve seen, but they were still very good and were worth the £6/$9 USD entrance fee. I also really appreciated that it was the least crowded tower viewing experience I’ve ever had as there was literally NO ONE else up there with me. That surprised me a bit, but it was really nice to not have to try and squeeze around a bunch of people to get a look at the views. Three people did come up in the elevator just as I was heading back down though. I’m not sure if that’s normal or if I just lucked out, but if you visit, hopefully your experience will be the same.

In addition to the tower, I decided to also visit a small exhibition called Treasures of Westminster Cathedral, which contains a variety of objects the cathedral has acquired in the 100+ years since it opened. The entrance fee is normally £5/$8 USD, but it was free today (not sure why, but a sign had been put up advertising that), so I figured it was worth a visit. I only spent 10-15 minutes walking around the exhibition (it’s pretty small), but it contained some cool info about the history and design of the cathedral in addition to a variety of religious objects. And because it’s on the second floor (or maybe third – you have to climb a spiral staircase to get to it, so it’s hard to tell how many floors it is), you get to see the inside of the church from above, so that was neat. I doubt I would have paid for it (I didn’t last night, after all), but if it’s free when you’re there, go up and see it!

After the cathedral, I was planning on going to The Who Shop, but Google Maps alerted me to a big delay on the Underground line I needed to take, so I delayed going there for a bit. Instead, I grabbed a quick lunch at Pizza Express (don’t judge me!) and then walked around Embankment to snap a few photos. I’m fully aware that I’ve taken some of the exact same photos on previous trips, but seeing the very London-y sights is one of the things I love about coming here, so I’m always happy to just wander around. I realized I hadn’t yet seen Tower Bridge (except briefly from a train) and since that’s my favorite, most London-y thing to see, I had to pay it a quick visit. Luckily, the nearest Underground station to it is on the same line (District) that I needed to take to The Who Shop anyway, so it all worked out!

By the time I was done at Tower Bridge and checked Google Maps again, the tube delay was gone, so I made my way to Upton Park to visit The Who Shop. It’s funny to me that I’m such a huge Doctor Who fan yet I had never visited this place before today, but it’s true. To be fair, I thought it was further away from central London than it is and because I can get everything I want online or at conventions these days, there wasn’t a pressing reason to go. I found my way there easily enough, but didn’t end up buying anything in the end. To be honest, their prices on just about everything seemed REALLY high (£25/$38 USD for t-shirts and pajama pants, for example), which isn’t too unexpected for a specialty shop, but I would only pay those kind of prices for something that seemed really special and I didn’t find anything like that. Still, it was great to visit! The shop also holds a small TV and film museum, which I debated going through, but I didn’t because I was really annoyed that you’re only allowed to take photos with a camera as opposed to a smartphone, tablet, etc. I don’t carry a camera – I use my phone to take all my pictures! Had I known that before coming on the trip, I would have made a point to bring my digital camera, but oh well. They do charge a small entrance fee (£3/$5 USD), which seemed totally reasonable, so do visit it if you get the chance. Just be sure to have a proper camera with you!

After that, I decided I just wanted to take one more spin through Trafalgar Square before heading home early for the evening. So that’s exactly what I did. 🙂 Check out the pictures below!

Blue sky behind the cathedral today!

Closer shot of the area near the door as I really like the design/style of this church. 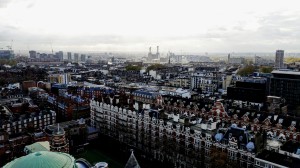 One of the photos I took from the cathedral tower. That’s Battersea Power Station just right of center. 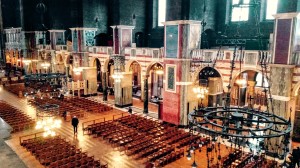 Looking out over the pews from the exhibition level.

The organist was in there and, from the sounds of it, he was tuning the organ while I was there. 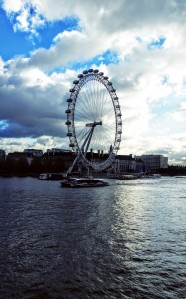 See? I told you I was walking along Embankment! 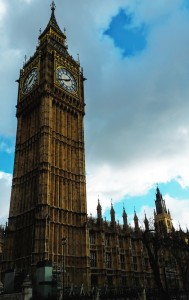 Ice-skating rink at the Tower of London.

And a selfie with the bridge, naturally. 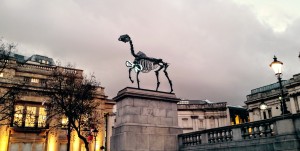 The Fourth Plinth in Trafalgar Square. This guy is called Gift Horse. 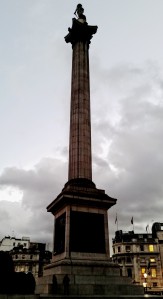 And that’s it for this UK trip! I have to get up around 430a tomorrow (which means my friends back home will mostly still be awake, since it will still be 1030p today for them!), so I’m making my goal of being in bed by 9p London time. I always wake up earlier than I really need to for things like this, but I always want to allow enough time to get showered, get the last few things in my luggage (toiletries, power cords, etc.), and just make sure I don’t have to feel rushed. I had a great time on this trip, but I’m looking forward to getting back to the States and seeing lots of friends this weekend.

See you in Chicago!