On this, the (nearly) two-month anniversary since my last post, I resolve to let you know what happened after I left London. Did I enjoy my Premium Economy seat? Did I get any sleep on the plane? AM I STILL ON THE PLANE TWO MONTHS LATER?!?! Read on for the answers to these questions and more…

It should come as no shock to anyone that I made it to Chicago (via Detroit) safely. As for my experience on Virgin, I would say it was perfectly fine. I wasn’t particularly wowed by the seat or food, but the service was great and I loved the fact that the Premium Economy seats are in their own cabin and that there were very few people in that cabin (there weren’t a ton of people on the plane period, for that matter). As a side note, I recently read an article about how Delta is taking steps to start treating Comfort+ as a separate class much like Premium Economy, so it will be interesting to see how that develops over time. But I digress. The flight from London was overall peachy and I even managed to get some shut-eye (not necessarily sleep, but the quietness of the empty cabin at least kept me relaxed through the flight). Connecting through Detroit was a breeze and my lowly Silver status proved useful as it got me upgraded to first class on the short flight from Detroit to Chicago. I’ll take it!

As you’ll no doubt recall, I came to Chicago to attend Chicago TARDIS 2015, one of my favorite conventions. This was also the third consecutive year in which I traveled to the UK just before going to Chicago, but this was the first time I flew directly from London to Chicago (the previous two years, I flew back to Minneapolis a couple of days before Thanksgiving and then traveled to Chicago from there). I figured staying in the UK a couple extra days and streamlining my travel plans would work well, which by and large, it did. The most difficult piece was having to get up so early when I left London (getting up early isn’t hard, but getting up early on very little sleep is!) and then having to stay up (somewhat) late the day I got to Chicago because we always have a convention staff meeting around 10-1030p that night. I opted to bow out of that and head to bed around 9ish, but I was pleasantly surprised I stayed up that late and got to hang out with and have a little Thanksgiving dinner with some friends at the hotel (a tradition for us). I’m glad I did my travel the way I did and I would probably do it the same way again if given the chance. This year though, it won’t be a problem as I’m not going to the UK in November this year anyway (though I will be going in September to attend another favorite convention – more on that later!), so I’ll go back to my standard plan of going to Chicago from Minneapolis. Who knows – I may even go back to road-tripping it!

So as for the convention itself, things went great! This was my ninth year attending (eighth consecutive year) and it’s been really cool to see it grow and change over the years, like the other conventions I attend. And also as usual, I kept busy working as a guest liaison at the convention. This year, I was really excited to work with the lovely Alex Kingston, who is of course well-known to Doctor Who fans as River Song, but is also a prolific actress of stage, film, and TV, including spending many seasons on another favorite show of mine, ER. I enjoyed working with her throughout the weekend and getting to know her husband and daughter as well, who also attended the convention. And of course, the real reason I come to conventions is to see all my great friends, so it was fantastic to see them! I had been really looking forward to this convention for awhile because I only get to see those friends a couple of times a year at best.

Conventions are always a bit of a whirlwind and I’m not as good at taking pictures at them as I used to be (probably because I’ve been going for so many years now), so the visual journey is a bit lacking. Also, since I pretty much don’t leave the hotel and the immediate area around it during this convention, I didn’t visit any new or exciting sites (like I can sometimes do when I’m at Gallifrey One in February). Still, enjoy the photos nonetheless!

I always get a picture of the TARDIS in the photo room as soon as I see it. 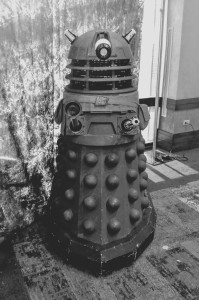 I also always have to get a dalek photo!

Alex onstage with my friend (and excellent guest interviewer) Steven. 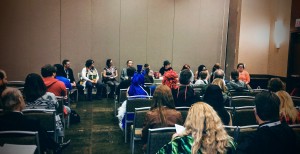 I don’t go to many panels, but I popped into this panel about the book Outside In 2, which a number of my friends are in. Pick up a copy here!

Me with my dear friend Ruth Ann and actor Samuel Anderson, who played a key character (Danny Pink) in Series 8 of Doctor Who. 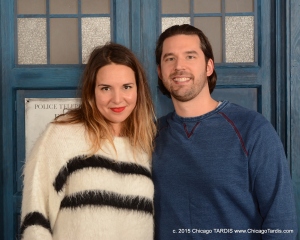 Another guest photo, this time with Ingrid Oliver, who has played recurring character Osgood in Doctor Who over the last couple of years. 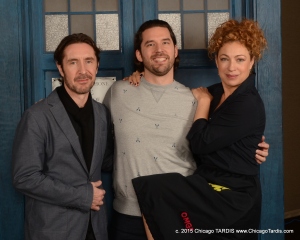 My favorite guest photo from the convention – me with Paul McGann (who played the Eighth Doctor) and Alex. Big thanks to the lovely folks at Chicago TARDIS for making these photos available!

And that was my convention weekend! Great to see friends, fun to work with Alex, and amazing to come back home at the end of all of it. I got bumped up to first class once again on the flight home (thanks Delta!), so it was a good (and quick) flight. After flying from Minneapolis to London to Chicago and then back to Minneapolis, it felt great to get home again, though it wasn’t for long…

Check back soon for another new post about my December trip to New York City!