Well, another trip has come and gone! What’s that? I forgot to tell you I was even going on this trip? Oops! Well, much like last December (even though I didn’t blog about it until February – oops again), Scott and I decided to make another Christmas-time trip to the Big Apple. And would it surprise anyone to learn that we also came to see my girl Mariah Carey do her Christmas concert again? Hopefully it doesn’t because that’s exactly what we did! As I’ve mentioned before, NYC is Scott’s favorite city, so he always loves visiting. I like it (not as much as London, but it’s still fun) and I love the Christmas vibe here at this time of year and, of course, I love any opportunity to see Mariah, so I was happy to come along.

First order of business – our home away from home. As usual, we looked to Airbnb to find a place to stay, focusing on the West Village (Scott’s favorite neighborhood). We didn’t have a great experience with last year’s apartment, so we splurged a bit on this year’s – still small, but perfect location, well decorated, really nice hosts (we met them on the first night and they checked up on us throughout the weekend), fast wifi, and comfortable sleeping arrangements. We flew into Newark this time, which worked really well, as it only took our Uber driver about 30 minutes to get from there to our apartment. The two guys who own the place were there to greet us and give us the keys (which is a bit unusual, as we often don’t meet the actual hosts) and then we were on our own. They also gave us a great restaurant recommendation for dinner (since we arrived there around 8p, we were hungry!), so after we got a little settled, we strolled over to Malaparte. It’s a great little (emphasis on little – like many restaurants in the West Village, it’s not a big space) Italian restaurant, with great homemade food and fresh pasta. Scott had spaghetti with pesto and I had lasagna and both were delicious. The prices were pretty decent, especially for Manhattan as I think we paid about $45 for both entrees, a cocktail for Scott, and some really tasty bread.

Post-dinner, we walked around the neighborhood a bit more and then headed back to our apartment to relax and get some sleep.

Interested in this trip’s home away from home? Pictures below!

Just inside the front door was the kitchen.

To the right of the kitchen was the bathroom. Nicely decorated! 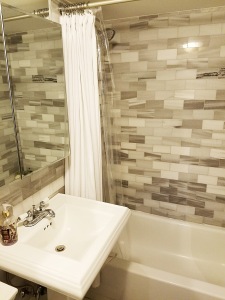 The shower wasn’t big (like everything in the apartment), but it was perfectly serviceable. 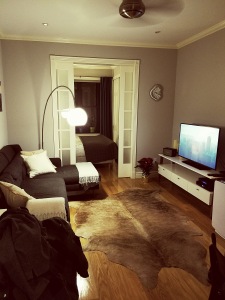 The living room, with a nice TV (that we didn’t use at all) and a comfy sofa.

The bedroom was predictably small, but perfectly comfortable. Only a queen-size bed though, which is too bad as it feels really small after being used to sleeping in a king-size at home!

After a decent night of rest (I always take some time to adjust to sleeping in a new location, so I don’t usually sleep really well the first night), we had a leisurely Thursday morning as we figured out what we should get up to before the concert that night. On my first trip to NYC, I did a few of the bigger touristy things and I assumed Scott had done them as well, but it turned out he hadn’t, so we decided it would be fun to do the NBC Studio Tour. Unfortunately, their website told us there were no tickets available over the next two weeks, but it also said pre-booking was “strongly recommended” rather than “required”, so we figured it would be worth just showing up to see if we could buy tickets at the door. With as much as we love to walk around the places we visit, especially in NYC because Scott loves it so much, we meandered towards Rockefeller Center. The weather was chilly, but sunny, so it was a nice walk and we got to snap a few pictures along the way. At the Rockefeller Center, we saw this year’s tree (seeing it during the day isn’t as magical as seeing it all lit up at night, but the whole place is still full of Christmas vibes) and walked around the plaza a bit. We kept our fingers crossed as we went inside to check on tickets, but alas, it wasn’t to be – no tickets available until 12/23. Oh well! Had we thought about it earlier, we definitely would have pre-booked this one (along with Ellis Island – I recommend pre-booking both on your next NYC trip), but not going this time means we have something to look forward to next year!

After the tour bust, we decided to find somewhere for a late(ish) lunch. Having eaten Italian the night before, we decided to consult Yelp for a good Mexican restaurant, which we found in Ponche Taquería. It’s another small place, so expect to wait if the tables are full (they weren’t when we were there, but were filling up by the time we finished), but the food is worth it! I had a delicious quesadilla and Scott had a trio of tacos and we both shared some excellent guacamole. Price-wise, this is another good option, with the whole meal costing us ~$40. Worth a visit when you’re craving Mexican food near Rockefeller!

Even though we didn’t “see” a lot per se, here are some pictures from the sights around the city.

Jackson Square decorated for the holidays.

The Flatiron Building is always photo-worthy!

The General William Jenkins Worth Monument near the Flatiron.

I didn’t get the name of this church! Anyone know it?

The New York Public Library is a really amazing building. 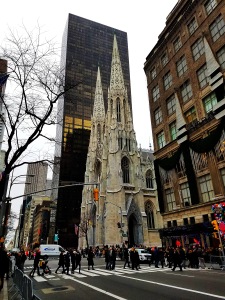 No trip to Rockefeller is complete without taking a picture of their famous Christmas tree!

Thus ends our arrival and (most of) our first day in NYC. Of course, we haven’t talked about the big reason for going yet – the Mariah Carey concert! Check out my next post for details on that, though it will really focus on a lot of pictures. We were in the second row, so I couldn’t miss the opportunity to take lots and lots of pictures.