Is it really Saturday night already?? To be fair, you may be reading this years after I wrote it, so it could be Tuesday afternoon for you, but for me, right this moment, it’s Saturday night (okay, to be fair, it WAS Saturday night when I started this, but it’s now Sunday morning) and we’re down to the last few days of this trip. But we had another fun (and tiring) day today on our trip to Cambridge, a new city for both of us! Although we didn’t love the 730a wake-up call this morning (truthfully not that early, especially compared to how early we get up when not on vacation), it was totally worth it. And we don’t plan on needing to set any other morning alarms during this trip, so we’ll sleep all the better tonight knowing we don’t have to wake up for ANYTHING in the morning (spoiler alert – we did sleep well!).

So how did we land on Cambridge? Although this is only Scott’s second trip to UK, we did hit a few different places on our first trip (London, Windsor, Oxford, and Stonehenge) and with as many times as I’ve been here, I’ve hit a number of other destinations (Manchester, Canterbury, Glastonbury, Bath, etc.), so our goal was to come up with a place that was new to both of us that also wasn’t too far from London by train (since this was always going to be a there-and-back-in-the-same-day kind of trip). With those criteria in mind, we kept coming back to Cambridge, though Bath was a strong runner-up. I haven’t been to Bath since my first UK trip in 2003 and it was part of a little whirlwind tour of England I did with a couple of friends, so I didn’t spend much time there and I don’t have any strong memories of it. Ultimately though, Cambridge is closer (less than 50 minutes by direct train) and it looked like it had more than enough to occupy us for the better part of a day (spoiler alert – it definitely did!). So we were up and at ’em (relatively) early, had a nice morning walk to King’s Cross (we got a much better fare from there and it only took us 20 minutes to walk there), made it to the train on time (again), and pulled into the station in Cambridge just after 10a. 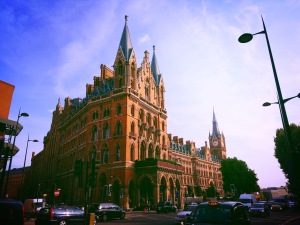 We passed the St. Pancras Renaissance Hotel on our way to King’s Cross 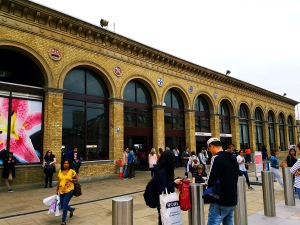 The train station in Cambridge.

When doing an ancillary visit to a city when you’re already on vacation to another (usually bigger) city, it’s nice to have someone else do some (or all) of the work for you, so Scott did a little research and found a free (tip-based) walking tour of Cambridge through an organization called Footprints, so we figured we would have them do the work for us. One thing we noticed as soon as we got out of the train station was all the people coming up and offering to sell us their own walking tours (you can’t miss them), so we were glad to already have something booked, making it easier to ignore them. I loved the fact that the tour was free and that Footprints (based on their website) is very intent on hiring locals, including students, who are very knowledgeable about Cambridge to be their tour guides. Our guide, James, was definitely that – he said he hadn’t actually studied in Cambridge, but that he’d lived there for 17 years, so we really appreciated his knowledge. It’s a two-hour tour and we used every minute of it, walking from place to place, learning about the rich history of Cambridge. It was pretty fascinating and I’m really glad Scott found it! They also do tours in Bath and Oxford, so if you find yourself in any of those three cities and you want to spend a couple of hours getting the lay of the land (while also learning about it), book with Footprints. Well, I say “book” but you actually don’t need to – you can just show up! You can pre-book online to guarantee a spot on a particular tour (there’s a small charge of £2/$3 per person), but you don’t have to. I suppose there’s a small risk that the tour will totally fill up with pre-booked people, but I assume it’s unlikely (when we pre-booked 12 hours before the tour, the website said there were another 85 spots available).

It was far too easy for me to take lots of photos during the tour, but I narrowed them down to the best ones (hopefully), so check them out below.

Mr. Simm’s Olde Sweet Shoppe may not have been part of the tour, but it’s a nice place to get a sugary treat before walking around for two hours.

Our first glimpse at King’s College, just before the tour started. There are a number of colleges in the city that operate independently, but also collectively under the University of Cambridge.

Our group with tour guide James (in the blue jacket in the middle) laying the groundwork for a fun couple of hours.

The Corpus Clock – a very interesting way to tell time!

St. Bene’t’s Church, the oldest building in Cambridge. We were hoping to make it back so we could tour the inside, but we never made it. 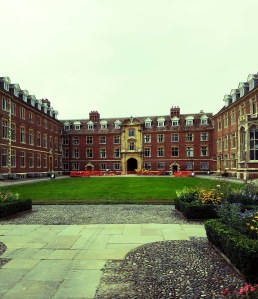 Another place we didn’t have time to go back to – The Fitzwilliam Museum. 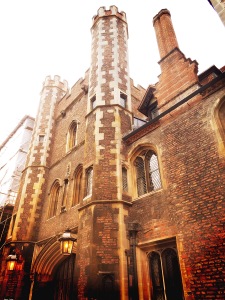 The Queens’ College. Note the placement of the apostrophe because it was given funding by TWO queens, whereas King’s College was funded by one king.

The Mathematical Bridge. Is the story about Isaac Newton building it with only wood (no nuts, bolts, or anything else) true? Visit Cambridge to find out! 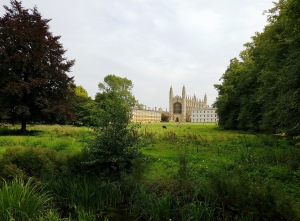 The “postcard view” of Cambridge, which is the backside of King’s College (and its chapel).

There was so much lush, green foliage on our tour!

Our first good view of the punters.

I had to catch a directional sign at some point on the tour! 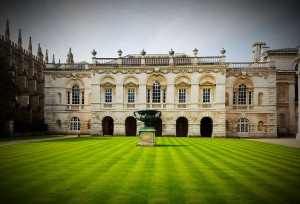 This tree sits outside Trinity College and is descended from the same tree that produced the apple that fell on Isaac Newton’s head.

A shot of the street in front of Trinity College where our tour ended.

By the time our tour wrapped up, it was after 1 PM, so we wandered around until we found a decent place for lunch. Isn’t it amazing how you can see a dozen great restaurants when you aren’t hungry/aren’t ready to eat, but then you can’t find ANY when you finally ARE ready to eat? Not fair! We did some googling to see if we could find anything, which we did, but nothing that was immediately near us, so we ended up settling for Bella Italia, which is just a chain Italian restaurant, but the food was decent and we appreciated the chance to sit down and rest our weary feet for a little while (we’d been on them since we stepped off the train in Cambridge, after all).

Recharged from our lunch, there were two things we knew we had to do (at minimum) with the rest of our time in Cambridge – go punting and visit King’s College (specifically, the chapel). We were successful on both! While on our walking tour, I noticed the bridge we were on while looking at the Mathematical Bridge seemed to be a hotspot for punting companies, so we walked back over there after doing a little research during lunch. Neither one of us was feeling brave enough to try pushing the punt ourselves (and after watching people punt who had clearly never done it before, we got confirmation that was the right decision), but we were hoping we could at least rent a private punt (i.e. – just the two of us in a punt with a punter), but that would have cost around £120/$155, so we opted for a standard tour, which includes a max of 12 people. That price was £38/$49 for the two of us for a 45-minute tour, so much more reasonable! Although not the company we original looked at online, Scuadmore’s did a great job on our first punting experience. Our punter (to be honest, I’m not even sure if that’s the correct term, but it’s what I’ve chosen :)) was really nice and knowledgeable, particularly with the slightly annoying (and loud) northern couple on the punt with us. The River Cam was FULL of punts, but given the fact that we were there on a sunny Saturday afternoon in the summer, that shouldn’t be too surprising. From what we were told, the private punt tour would have been much more affordable at a different time, so if that’s something you’re interested in, consider doing it on a less busy day. Or, if you’re feeling brave, drive the punt yourself! However you do it, just make sure you have a great punting experience in Cambridge because it’s not to be missed.

Waiting for our turn on the punt. 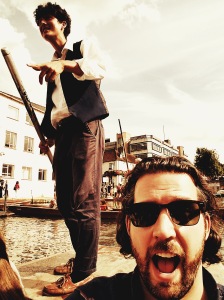 I was the first one on, so I sat right by our punter. He was great!

At the beginning of tour, just about to go under the Mathematical Bridge.

One of my favorite photos of the day, taken from the punt, looking at the back of King’s College. 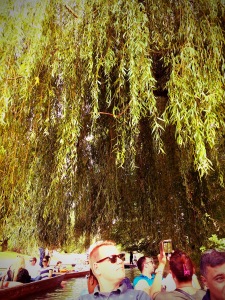 Watch out for those willow trees!

After our punting adventure, we zipped over to King’s College so we could tour the chapel and grounds around it. I’m glad we got there when we did because it turned out we only had about ten minutes to get inside the chapel before they were going to close it for the day! Note that tickets must be purchased at the King’s College Visitor Centre for £9/$11 per adult, so don’t show up at the entrance without your ticket (don’t worry – the ticket office is right across the street). The chapel is certainly the biggest chapel I’ve ever been in – felt more like a cathedral to me! It’s a pretty amazing building though (be sure to also learn about the night climbers who put things like santa hats on the chapel’s spires), so make it a priority to see it when you’re in Cambridge. The grounds are nice as well, particularly for the view of the punts that pass by. But be sure to walk around all the grounds to take in the buildings, the views, and the (hopefully as nice as ours) weather. Check out the photos below!

Amazing stained glass inside the chapel!

See what I mean? Seems more like a cathedral than a chapel!

Adoration of the Magi, painted in the early 1600s, hangs behind the main altar.

The outside of the building is really imposing up close.

The same view we got from the punt, but this time from land.

Don’t worry – my foot was just above the ground. Unlike several other people, who were just traipsing all over it. 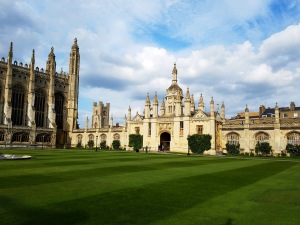 Great views of the buildings from the grounds.

And a selfie to end the day before we head back to the station.

And that was our full day in Cambridge! I’m really glad we chose this for another day trip and I think you will be if you choose it, too. Don’t miss it!

Next up, another day in London.