Another day in London has come to an end, so time continues to fly by, but we’re having a lot of fun! After arriving jet-lagged on Wednesday and needing to get up at a specific time yesterday to catch our train to Brighton, it was very nice to not have anything to wake up for today. And since we didn’t get to bed until after midnight last night, we both took the opportunity to sleep in and didn’t really get out of bed until 830-9a (very late for both of us!). It was nice to have the morning to just relax and write up a blog post for yesterday’s happenings, especially since we’ll be getting up early(ish) again tomorrow (more on that later).

As has now become customary on our trips, our first venture of the day was to find food. In this case, lunch, thanks to the aforementioned sleeping in. After yesterday’s delicious Mexican food in Brighton, Scott was feeling fish-and-chippish, so he found a tasty-looking place called Gigs just a few minutes away from our flat, so we decided to give them a go. Although they do have fish and chips, they also offer a variety of other foods with a Mediterranean (Cyprian, specifically) flare to them and I found several things on the menu that interested me right off the bat. Scott was able to get his fish and chips (though not with his preferred first choice of haddock – had to go with cod instead) while I went for a spicy sausage called pastourma with chips (fries, for us USAers) and Greek salad. Despite having to settle for cod, Scott really enjoyed the fish and chips and my food was totally delicious. We had also ordered hummus with warm pita bread, which was also tasty, but we wouldn’t have ordered it had we seen the portion sizes of our entrees – they were huge! The big meal kept us going throughout the day though, so it was nice to not have to hunt down another restaurant later. The prices were also good, with our whole meal coming in at £29/$37, so I would give Gigs a hearty recommendation. Check them out the next time you’re in Fitzrovia!

Walking into Gigs in Fitzrovia. 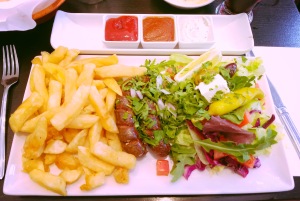 I told you it was a lot of food! And this doesn’t even show our hummus – oof!

Because the weather was so sunny, we decided today would be the perfect day to visit the London Eye in hopes that we’d get some great views. And indeed we did! That made up for the fact that we missed going to the Eye when we were last here in 2013. Now, to be fair, the Eye is a pretty big tourist trap that feels like it’s mostly about making money, but I do think it’s one of those things you should do at least once, especially on a clear, sunny day (nothing worse than paying tourist trap-level money for bad views!). I’m really torn on pre-booking tickets for this because of the weather component because, on the one hand, it’s nice to save a few £££ (specifically for us, about £7), but on the other, I would hate to pre-book only to run into bad weather (remember how we got burned doing that in Estonia?). Because the forecast has been so consistently good, we should have done it, but oh well – learn from our mistake! And we added insult to injury (from a wallet standpoint) by choosing fast track tickets, which cost us an additional £10/$13 each and saved us maybe 20-30 minutes in line. The lines looked somewhat long, but we only had to wait a couple of minutes to buy our tickets and it looked like the lines to get into the Eye itself were moving pretty quickly, so we probably didn’t need the fast track tickets, but again, no big deal. Money is for spending, right? After 10-15 minutes in the fast track line, we found ourselves being bustled into one of the Eye’s capsules to begin our slow trip around the wheel. As I said, the views were worth it, especially since the glass in this capsule was less reflective than the i360 glass, so I was able to get some decent pictures. And as an added bonus, I got to hear a mother say to her kids “I can’t look down because I’m afraid of heights and I’m also claustrophobic, so those are two bad things together.” While I feel for her, I must STRONGLY recommend that you don’t visit the Eye if you’re afraid of heights or if you’re claustrophobic (though, to be fair, the capsules are pretty large and they’re made of glass, so I wouldn’t think they feel too enclosed). This was, I think, my third or fourth time going on the Eye since I started coming to London and the experience has been the same every time, though I have been on it a night two of those times, so at least I got to see the lights of the city from above. In my opinion, go on the Eye once and you’ll be good.

Spying on the Eye while crossing the Thames. 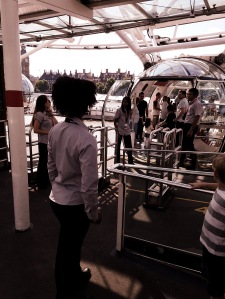 The wheel keeps turning while patrons walk in and out of the capsules, so move quickly and watch your step!

Seeing London from above gives you a birds-eye view of the construction cranes dotted throughout the city.

I really liked this view because we could see the BT Tower, so it gave me a sense of distance between our flat and the Embankment.

This is the only picture where the glass gave me reflection grief, but I wanted to get a shot of Big Ben and Parliament from above.

After the Eye, we made our way back across the Thames to head towards Buckingham Palace. For a couple of months in the summer, the palace’s state rooms are open to the public and, since we missed out on them the last time we were here (they weren’t open during that trip), we decided to hit up the tour on this trip. I actually toured them once before, but it was 8-9 years ago, so I didn’t mind visiting them again, especially since the current exhibition features many of the royal gifts Queen Elizabeth II has received over the last 65 years. It’s kind of fascinating that heads of state give gifts to each other on official state visits, but it was certainly interesting to see the variety, ranging from something as simple as a pair of mittens to gorgeous works of art. As with the Eye, this is a pretty big tourist trap and at £23/$30, it’s not the cheapest one (though, to be fair, I’m sure it’s not the most expensive, either), but again, it’s a quintessentially London thing to do, so I still recommend it. And, you can feel good about your money going right back into allowing royal residences to be open to the public and in managing the vast art collections of the monarchy, since they don’t receive any other funding (the Royal Collection Trust does all the work).

This shot of Big Ben from the ground didn’t have the reflection from the Eye, but it made me focus more on all that scaffolding! Still, if buildings like this are to stay standing, I guess they need maintenance, right? 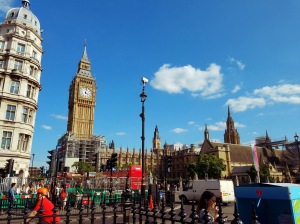 This angle was MUCH better, especially with all that blue sky visible.

We followed the Birdcage Walk to get to the palace. On a sunny day like today, we really appreciated all the shade offered by the trees (it runs next to St. James’s Park).

Not a bad house, eh?

Ready to tour the state rooms!

Unsurprisingly, you aren’t allowed to take pictures on the tour, so I had to wait until we exited through the gardens to pull out my phone. 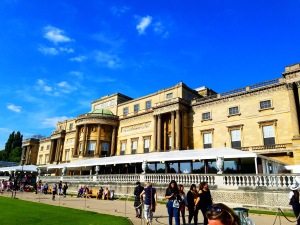 The back of the palace. Still looks pretty fancy!

One more shot of the back of the palace, this time framed by some trees on the way to the exit (through the palace gift shop, of course). 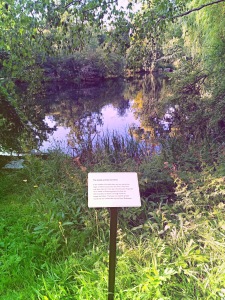 The lake behind the palace has an island that houses several beehives, whose bees are maintained by the Royal Beekeeper. Naturally.

Wellington Arch, which was built as an original entrance to Buckingham Palace.

Since we were out late last night, it was nice to get home by 6p tonight and just relax. And it gave me the chance to get this blog done tonight rather than tomorrow! Which is a bonus because we’re off on another day trip tomorrow to…Cambridge! We were always planning on doing at least one other day trip aside from Brighton and after some research and checking with friends, Cambridge won. We’ll have to be out of the flat around 830a to catch our train, so we don’t have to be up TOO early, but early enough that it’s time for me to get some sleep now.

Check back soon for a download of our day in Cambridge!