It’s already Friday! The sun is shining and there’s a nice breeze coming in from our patio as I write today’s blog from our London flat. Of course, London isn’t where we spent our time yesterday as we went spent the day in Brighton. And what a great day it was! For the uninitiated, Brighton is a seaside resort town on the south coast of England, about an hour’s train ride from London. Because I have friends there, I’ve been there several times over the years, but Scott had never been before, so I knew we had to make it part of this trip. I took a bit of a gamble and booked train tickets a few weeks ago (a gamble only because you never know what the weather may do in England), but it paid off because the weather couldn’t have been more perfect (sunny, warm, and a bit of a breeze) and we had a lot of fun spending the day with my friend Matt and later my friend Steve (he joined us after he finished his day at work).

We started the day in our flat, hoping to wake up in the morning refreshed from a mostly-normal night of sleep after our arrival on Wednesday. And I would say we got that! We crashed a little early on Wednesday night (around 830p) because we were both (unsurprisingly) really tired and had a pretty good night of sleep. I woke up a few times during the night/morning, but I think Scott had a little more luck sleeping than I did. I was awake for the day around 715a, which is I was happy with considering our 830p bedtime! I got our first day blog put together and we got ready for the day, but we left the flat just a little bit too late to do our planned walk (around two miles) all the way to Victoria Station to catch our train to Brighton. Why walk all the way there when we’ve got an Underground stop (Warren Street) just around the corner? Well, we like a good walk! When we’re home, we always take long walks (our standard route is 6.5 miles) on the weekends, so we want to still get at least some of those steps in on this trip, so we’re happy to do walks like that. Obviously though, don’t feel like you have to when you’re in London as tube stops are everywhere and I highly encourage you to use them! Anyway, instead of walking all the way to Victoria, by the time we got to Green Park, it felt like we would be cutting it too close if we walked the rest of the way, so we hopped into Green Park and took the Victoria line one stop and got to the train on time.

After an hour(ish)-long train ride, we arrived in Brighton! My friend Matt lives in Hove (part of Brighton), so he caught a bus over to us and we met him by the station. I haven’t seen him since November last year (at Chicago TARDIS), so it was great to see him again! He had previously met Scott on our first trip over here together, so I’m glad they got to reconnect as well. We didn’t have any definite plans for the day – we just wanted to hang out with Matt and see some of what Brighton had to offer. Our first order of the day was lunch (hey, our train arrived after 11, so it was the right time of day for it!) and we landed on going to La Choza (Matt’s recommendation), but they weren’t quite open yet, so we spent some time wandering around the North Laine, getting a peek at the seafront, and seeing some other Brighton sites before heading back to La Choza a little after noon. Our lunch was great! Between the three of us, we had a quesadilla, burrito, and tostadas and we also shared some queso fundido with chorizo, along with a couple of adult beverages, and everything was delicious! I had never even walked by this place on my previous trips to Brighton, but it’s one I would love to revisit in the future. I definitely recommend checking it out the next time you’re in Brighton!

With our bellies full of delicious Mexican food, we set off to see more of Brighton, taking in sights like the Royal Pavillion, which was built starting in the late 1700s for King George IV and is a really incredible-looking building. I hadn’t been inside it since my first UK visit waaaaay back in 2003 and I thought we would for sure end up going through it yesterday, but we never did. That doesn’t mean you shouldn’t though! It is a great place to visit when in Brighton, so check it out! Or do we what we did and just have a nice walk around the town. 🙂 Instead of the Royal Pavillion, we spent some time wandering down the seafront, landing eventually at the British Airways i360. You may remember me mentioning the i360 in last year’s Brighton post (it had just recently opened then), but I didn’t go on it then, so we all decided to give it a try this time (Matt hadn’t been on it either – too touristy for a local!). Although it’s obviously a bit of a tourist trap, it was pretty fun and the sunny, clear weather gave us great views over Brighton and the surrounding South Downs. At £16/$20 for adults (cheaper for children, over-60s, and locals), it’s not the cheapest way to spend a half-hour, but on a sunny day, I would recommend giving it a try. Sadly, the glass inside the i360 is particularly reflective, which makes taking photos of the amazing views pretty difficult (as you’ll see below), but I guess that just means we had to live in the moment a bit more!

After the i360, we continued to hang out and relax for the rest of the day. We stopped by Scoop and Crumb for a sweet treat (try the ginger/cinnamon ice cream – very tasty!) and then went over to the Camelford Arms, a chill gay pub (and dog-friendly, too). This is where my friend Steve met us, after we’d been hanging out and chatting for about an hour. Steve is another great friend of mine who I’ve known for nearly 17 years now. Oh, how time flies! He was actually the driving force behind my first international trip in 2003. I had met him at the very first Chicago TARDIS convention in 2000 and I ended up traveling to the UK with two other friends, Zoe and Cory (also from Doctor Who conventions) to visit him. We stayed with him and did some traveling around southern England (and London as well) and had a really fun time. I usually see him at least once a year, either on a UK trip or at a convention (or both!), but I hadn’t seen him yet this year, so I’m glad he was able to meet up with us! He stayed with us at the Camelford and then moved on to Bar Broadway, where we had more drinks and lucked into another pub quiz. If you’ll recall, the same thing happened the last time Scott and I saw Matt in the UK, though that time it was in London. Sadly, we couldn’t stay for the whole quiz as Steve had to get somewhere else and Scott and I had to catch our train back to London. We made it through four of the six rounds and were doing pretty well overall. One of these trips, we’ll stay for and win a pub quiz! 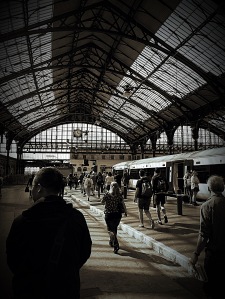 Getting off the train in Brighton.

Meeting Matt (in the lower-right corner, with the hat) at the Clock Tower. 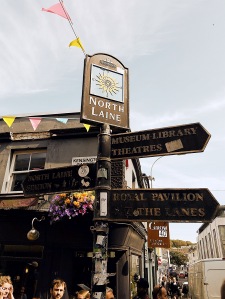 Walking through the North Laine before lunch.

There were lots of people enjoying the seafront! Definitely different than the times when I was here in November the last few years.

I love just being in front of the water pretty much anywhere, but it’s especially nice in Brighton. 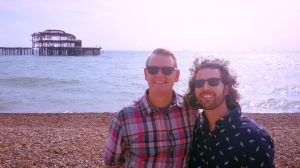 Looking a bit wind-blown in front of the remains of the West Pier.

Approaching the i360 to buy our tickets. 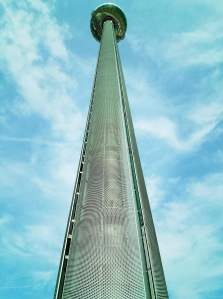 Can you spot us in the reflection of the underside of the i360 capsule? 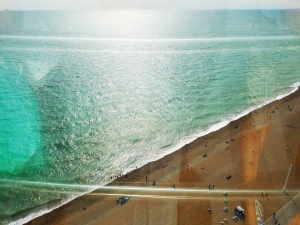 Gorgeous views from the i360 spoiled in the photo by all the reflection. Boo! 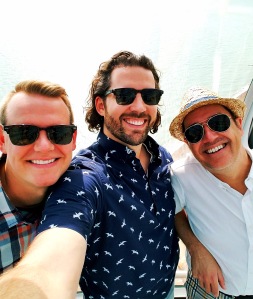 It was really cool to see the West Pier from above. I wish I could have seen it when it was still in operation!

Outstanding view of Brighton, with the South Downs in the distance.

We love Brighton, too!

All four of us just before leaving Bar Broadway.

And with that, our full day in Brighton came to an end. We had a lot of fun! We didn’t get back to our flat until about 11p and didn’t make it to bed until after midnight, but we both had a really good night of sleep and, now that it’s nearly 11a, we’re getting ready to head out for our first full day in London. Plans are still TBD for the day, but stay tuned for the next post to read all about them.