We have arrived! Yesterday, that is. London, I’m in you again and, as usual, I couldn’t be happier! The flight from Minneapolis proved to be as uneventful as possible, which is generally a good thing for flights, I’d say. We departed on time, got no sleep (as per usual), and even landed a little bit early. I did really try to sleep on this flight though! It just doesn’t work for me, though I think Scott is a little better at it than I am. I told him we can fix this problem by just flying business class going forward, so we’ll see if we make that happen. 🙂 Despite the TOA (that’s “tiredness on arrival”), we made it through Border Control quickly (Heathrow is always really efficient at that, in my experience), collected our bags, and then totally randomly ran into someone I know from Minneapolis! She works at Target as well and it turns out she was on the same flight we were as she was heading this way for a work trip. You just never know when you’re going to see a friendly face!

Unlike previous trips, we decided to catch an Uber into London rather than the Underground. Scott suggested it on the plane and I immediately balked, knowing what London traffic is usually like, but I checked the app when we arrived and both the estimated cost and travel time were reasonable, so we decided to give it a try. The app did a great job of telling us exactly where to go (for the record, it’s the short-stay parking garage), but unfortunately our driver did a crap job of picking us up. So crap, in fact, that he never arrived! He accepted the ride while we were on our way up to the parking garage and, according to the map, he never even moved. I texted him, but got no response, so after waiting for 10-15 minutes, I just cancelled the ride. Of course, Uber charged us a delightful £10 cancellation fee (ironically, that was for the “driver’s time” even though he never came to get us or responded to my text), but a quick submission through the app to request a refund of that fee resulted in a credit back. I re-requested, got a new driver, and he was there in less than ten minutes to get us on our way to central London. Despite my fears about traffic, the trip ended up taking us about 45 minutes – less time than Uber estimated and definitely less time than it would have taken on the Underground (and with the added bonus of not having to schlep our bags around for an hour). The cost of $43 USD wasn’t bad either, so I’ll have to look into using them on future trips! Though I do actually enjoy using the Underground to get into the city, I appreciated not having to worry about dragging my bag around, especially since this journey would have involved changing trains to get to the right line.

Upon arrival, our Airbnb host met us at the door of our flat in Fitzrovia, just off Fitzroy Square, and with the BT Tower staring down at us (don’t worry, Doctor Who friends – we’ll avoid WOTAN). I was extra appreciative of him because we arrived earlier than expected thanks to our early flight arrival, but our arrival at the flat bounced around a bit thanks to our first driver not picking us up. He was very nice and did a great job of showing us around our flat, explaining how everything works, and showing us the really detailed house guide he has, which includes everything from contact numbers to restaurant recommendations to nearby points of interest. The flat itself is pretty decent – the rooms aren’t big, but it’s nice to have much more space than we would in any hotel room! Check out some pictures of the flat below. 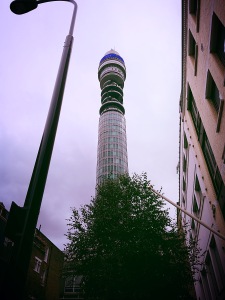 Looking up at the BT Tower from literally outside the front door. 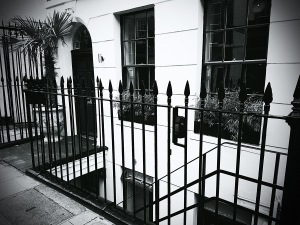 This is us! Our flat is actually on the lower level though, so we just have to walk through the gate and down the stairs to reach it. 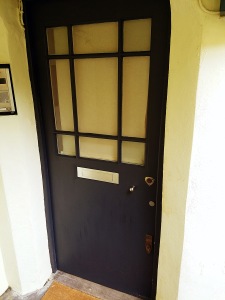 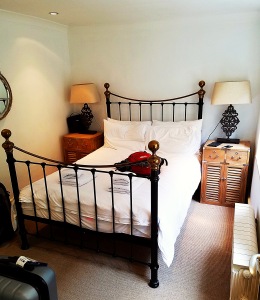 The bedroom is just inside the front door, to the right. One of the only drawbacks of this place is the lack of a king-sized bed, which we’ve gotten very used to at home. 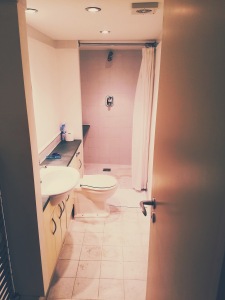 The bathroom is a bit further down the hall, also on the right (in fact, the whole flat is on the ride side!). Again, not bad, though the water pressure in the shower leaves a lot to be desired for. I’ve come to expect that in most countries outside the US, so it’s not the end of the world. 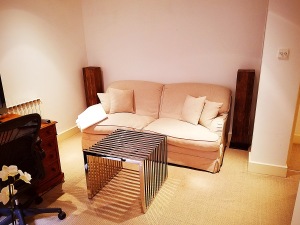 The living room/lounge is further down, past the bathroom. We spent some time relaxing in here before heading out to see some of the city. 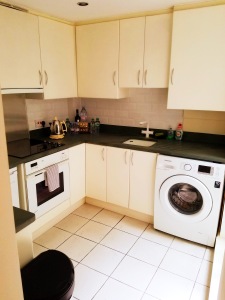 The kitchen isn’t big, but we won’t be using it much anyway. 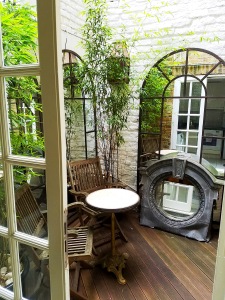 We’ve even got a little patio! There are doors to it from both the living room and the kitchen, so we’ve been keeping them open to let all the fresh air in. The temp has been great so far and NO RAIN!

After going through the usual settling-in routine (I really like to get my stuff unpacked and put away so I’m not living from a suitcase for a week), we took the requisite showers to wash off that icky plane feeling and went out for a bit of exploring. On the drive in, I noticed we were pretty close to Hyde Park and the Albert Memorial, neither of which I’ve really been to before, so I thought that would make a good destination. The weather was really nice actually and the walking helped keep us awake and it was nice to walk around a part of London I’m not as familiar with. Apparently many Londoners were equally excited to be out in the nice weather (no rain, nice temp, and even some SUN) as the park was full of people, great for people-watching as we winded our way towards Kensington Gardens and the Albert Memorial. The memorial itself is pretty grand-looking, but looking is really all you can do with it, so it wasn’t a long stop – just enough time for a few photos. Which, dear reader, you can see below! 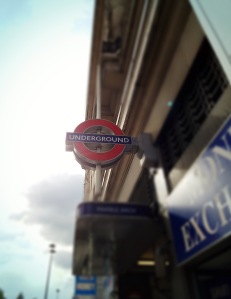 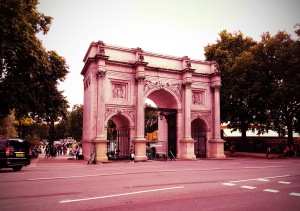 A panorama of Hyde Park. 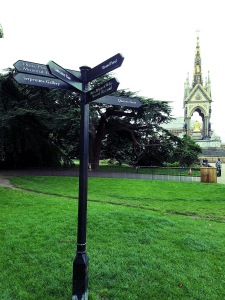 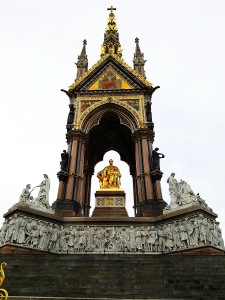 The memorial itself is pretty impressive. Definitely worth a visit the next time you’re in London! 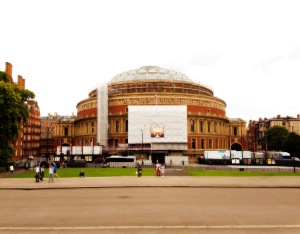 The memorial is also directly opposite the Royal Albert Hall.

After the memorial, I thought it would be nice to walk over to Trafalgar Square (a favorite spot of mine), grab something to eat, and then head back to the flat, assuming we would be pretty tired by that point. That was definitely a correct assumption! So we got a quick meal at Tortilla (delicious as always for me, but I know we’ll be finding some more exciting places for Scott while we’re here) and opted to walk it off by hoofing it back to the flat instead of taking the train. Not before I took at least one photo though! 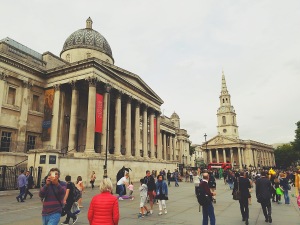 Ahhh, my home away from home!

Upon reaching the flat, we stayed awake for…not very long. I managed to get my photos edited, but that’s about it, hence why you’re getting this blog today as opposed to yesterday. 🙂 Today though, we’re up, showered, and ready to head out to a day on the coast in Brighton. Read all about it…soon!