Okay, okay – it’s actually more of a week-long getaway, but week doesn’t rhyme with getaway, so day it is. 🙂 That’s right – I’m here in sunny Palm Springs with my husband Scott for a week of fun and relaxation in the sun! Today is Sunday and we arrived on Wednesday afternoon, so we’ve already had a good few days to soak in the rays (see what I did there?), so I figured it was time I blogged about it! Now, as you may remember from my 2014 and 2015 trips to Mexico, there’s really not a lot to blog about when it comes to these kinds of trips because they’re all about relaxing. With this trip though, it feels like there’s a little bit more to say because we’ve rented a house through VRBO, so we’re doing more than just hanging by the pool at an all-inclusive resort. This house does have its own pool, so we may not be doing TOO much more than lounging by it, but still somewhat more. 🙂 Palm Springs is also somewhere we’re seriously considering owning a winter home in at some point in the not-too-distant future, so we’ve also been looking into that more and paying a lot of attention to the area, the weather, etc., so we know what we could be signing up for.

So what has this trip been like so far? Really relaxing! First of all, the house we’re staying in is really nice. We’re in the Vista Norte neighborhood, which is only a couple of miles from the little downtown area. Palm Springs isn’t a particularly large place, so I’m sure nothing is too far from anywhere, but it’s nice to know we can walk downtown if we want to (we haven’t yet, but we could!). We’re less than a half-mile from a grocery store (we have walked there) and the views around the area are great – so nice to see a backdrop of mountains, palm trees, and sun! It seems all the houses here are what we would call a ranch back home – spread out on one level (though here, the houses have no basements). We’ve got three bedrooms, two bathrooms, and, like most houses here, a very nice pool in our backyard. When we first booked this place, we were hoping we could have some friends join us (hence the size), but that didn’t end up working out for anyone, so it’s just us. Check out the pictures below!

Palm Springs Airport. It’s kind of like an outdoor mall, with some coverage, but lots of open-air space.

Our house in Vista Norte (and our rental car, too).

The gorgeous backyard pool! I was surprised to see some grass as well, since many houses here forgo grass in favor of rock (we are in a desert, after all). 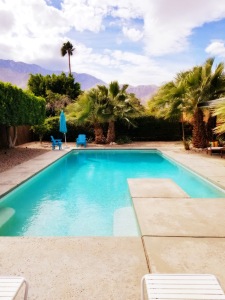 This is a salt-water pool, which is supposed to be much better for your skin than chlorine.

Moving into the house, here’s the bright living room. 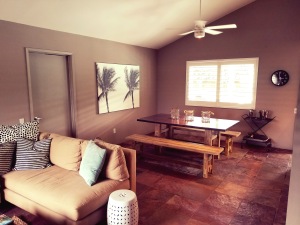 And next, the dining room. 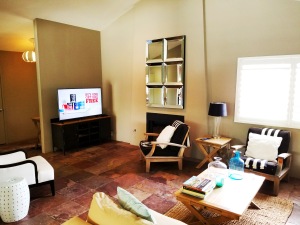 Looking towards the living room from the dining room. I don’t think we’d ever have a use for that fireplace! 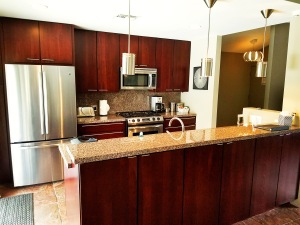 The kitchen, which is basically part of one big space with the living and dining rooms. It’s surprisingly well-stocked and even has a good selection of spices, sugar, etc., a fair bit of which must be leftover from previous tenants.

The first of three bedrooms.

The full bathroom in the hallway. 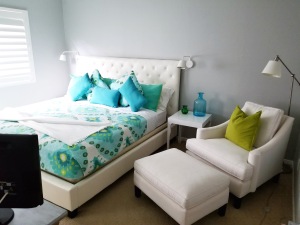 The second bedroom, with a nice king-sized bed. There would have been plenty of room for at least a couple of friends to join us!

The master bedroom, which also has a king-sized bed.

The master bathroom is decent, though the tub takes a little while to drain.

Both the master bedroom and bathroom have sliding doors out to the pool. So nice!

Of course I had to dip my feet into the (heated) pool right away. The temperatures have been in the mid-70s on this trip, so the pool heat has been appreciated. 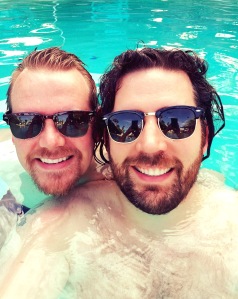 And a nice pool selfie as well.

I’d say we (well, Scott – he did the research for this trip) made a pretty good choice. In addition to the house, there’s a lot of natural beauty to be found here. We haven’t taken a ton of photos, other than the house, but we did get a few of the surroundings when we’ve walked to the store and gone to dinner.

Looking towards the mountains on our walk to the grocery store.

Looking the opposite direction, the views (and sun) are still great! 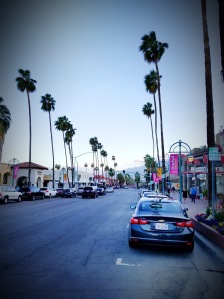 This is downtown Palm Springs, as seen when we were walking to dinner one night.

Aside from relaxing, swimming, and sunning, we have, of course, been eating. We’ve been eating breakfast and lunch at home, but have been visiting a different restaurant for dinner each night. Scott has been in the driver’s seat in terms of picking where we go as he’s more into food than I am – here’s where we’ve been so far:

We haven’t been taking a bunch of food photos, but we did get a few that I would call food-adjacent.

Looking over the other patrons at Lulu from our top-level table.

We each had a beverage at Lulu – a Tito’s Breeze martini for me and a mojito for Scott. Both were good and I could definitely taste the vodka in my martini!

And that’s been our trip so far! After spending part of today in the pool and then eating lunch, I think we’ll be heading back out to the pool shortly. I still have another post or two in me for this trip though, as we’ve got some other dinner spots to hit up and we’ll also be exploring a bit more of the area. Stay tuned!