I’m now home from my London trip! How did that happen?! I mean, I understand that vacations have to end, but does it have to be so quickly? Sheesh! Since the trip is over and I’m already back in the groove with life at home, it’s actually nice to still have one more day to write about!

I had every intention of writing this up on Tuesday evening, but plans changed a bit, for the better! As you may have read in this blog before, I tend to always make the last day before I fly home from a trip an early one so I can get everything packed up (that way I only have to get the last few things together in the morning). And I did do that! I got back to the house around 6 PM and got all my packing done and then my friend Lisa messaged me to see if I was around. We had been in touch a few times on the trip and our schedules kept not aligning, though we had talked about Tuesday evening as an option. I’m so glad it worked out! And really, the fact that I already had my packing done meant that going back into the city was easy because I knew I’d have plenty of time to edit photos and write a post later in the week (like, right now!). We met up at the Amba Hotel, literally connected to Charing Cross, which was a perfect location for both of us (so easy to get to!). I’d never been there before, but it had been recommended to me more than once, so I’m glad we went. The bar space was really comfortable, so I’ll definitely visit there again. We ended up chatting for three hours! I didn’t get back to the house until nearly midnight (since I had to catch the train back to Lewisham) and I didn’t want to stay up late editing photos, so I did that on the flight home (hey, I had a little over eight hours to kill anyway) and I’m writing the post today (well, and some yesterday). So it all worked out!

Well, now you know how my last day ended, but you’re probably more interested in what I did with the rest of it. I mean, what can I say? My final days of London trips often involve revisiting my old favorites to tide me over until my next trip and I’d say that held true for this final day, too. I started with a walk around Trafalgar Square – it was so sunny! The nice weather and the fact that it was a random Tuesday combined to make things not too crowded. I continued my wanderings, heading back towards Forbidden Planet as I had spied a couple of things there I wanted when I stopped in on Thursday, so I decided to go back and buy them (nothing fancy – just a magazine and a new Oyster card holder). It’s funny how mundane seeing all this great Doctor Who merchandise laid out in front of me in a store like that is today – if 10-year-old Jeff had seen that, he would have thought it was magical! I’ve loved Doctor Who for so long that I never had the chance to see merchandise for it in any stores and, at that time, the internet wasn’t a thing, so it wasn’t until high school (when we got the internet at home) and then my freshman year of college (when I attended my first convention) when I really got access to stacks of merchandise, toys, books, etc. Of course, that changed a number of years ago and now it’s very normal to see it at Barnes & Noble, on Target.com, and lots of other places, but there’s still something a little magical about seeing a bunch of Doctor Who swag in front of me. 🙂

After my shopping stop, I felt compelled to head to Tower Bridge so I could catch my favorite view. My trip wouldn’t feel totally complete without a visit there, especially on a day like this when the sun was shining over everything (though sometimes the glare of the sun makes photos a bit harder, but I’ll never complain about sun in the UK!). And as a reward for getting to see my favorite view (SO much work to get there after all – not!), I found a stand selling Mr. Whippy and got myself an ice cream cone. The soft serve ice cream is sooooo delicious! It’s like what you get from Dairy Queen, but even more rich, sweet, and tasty. I don’t necessarily get one on every trip, but if presented with the chance to buy one, I usually will. And enjoying it in the sun while looking up at the Tower of London made the extra calories worth it!

To burn those calories off, I made my way back to the tube to catch a train towards HMV on Oxford Street for another round of Blu-ray shopping (since my stop at Fopp on the first day didn’t yield anything). I probably should have just hit this store up before my Tower Bridge visit (since I was already pretty close to it when I was in Leicester Square), but the weather was so nice and I was enjoying my wanderings, so I didn’t mind! And this time, I had some shopping success as HMV had tons of Blu-rays on a 5 for £30 special, including lots of horror/thriller titles (my favorite!), so I spent some time digging through what that had to find some good ones. Now that I’m home, I just need to watch them all!

All the shopping and walking around had started to make me pretty hungry but, as always seems to be the case when you’re really hungry, I couldn’t decide what I wanted to eat. Waaaaahhhh! I finally felt the pull towards pub food (probably thanks to the lingering memories of the pub lunch I had with Matt), so I eventually found my way to Coach & Horses in Mayfair. The outside of this particular pub is pretty unique (see photo below) and felt familiar to me, but I didn’t recall eating there previously. Whether I had or not, I was glad I went this time because it was really tasty! I went with a steak pie that was excellent, as were the chips (fries) and the yummy gravy they served it with. It really hit the spot! Of course, I then had even more calories to walk off, so I hit up some vinyl shops for Scott (he’s recently gotten into records and wanted me to look for a few), but I struck out at both of them. But that’s definitely something I’ll put a pin in for the next time Scott and I are in London together as there are a lot of record shops to choose from! If any of you have recommendations on favorites though, especially for 90s music, leave a comment below.

As for the rest of the afternoon, it was all about more walking around in my favorite city. In addition to not seeing Tower Bridge yet, I also hadn’t walked along the Embankment, so I did some of that (though a section of sidewalk was closed, which was a bit of a bummer) and also spent some time just sitting and people-watching in Leicester Square. My friend Ruth Ann always says that Leicester Square is the perfect spot to just sit and contemplate her toes, so I did a bit of that (my toes though, not hers). And, in a move that will shock no one, I stopped by Retro Bar for a final drink before I called I officially called it quits on the day (well, until I went back into the city, but you already read about that earlier). Such a good last day!

Photo-wise, the theme is once again focused on the random sights around London. Maybe one day I’ll tire of photographing (some of) the same things on every trip, but I doubt it. 🙂 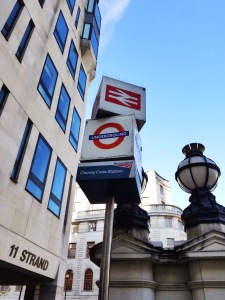 A more subdued Underground sign, this time outside of Charing Cross. 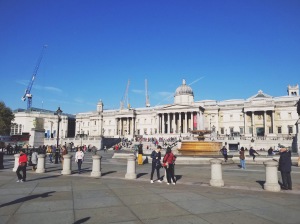 Sunny Trafalgar Square. Not a cloud in the sky! 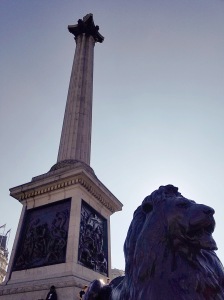 It’s hard to get a photo of any of the lions without people climbing up to pose with them, so I had to be a little patient to get this one. 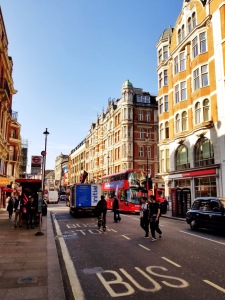 Old buildings, double-decker buses, and lots of people. Looks like London to me! 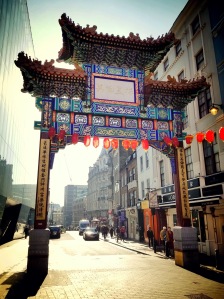 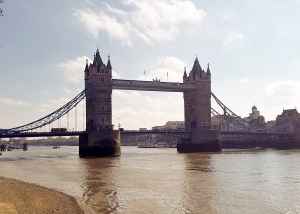 A quick tube journey later and I’m at Tower Bridge! 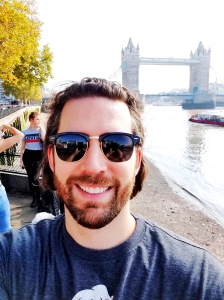 Another selfie with my favorite London view. 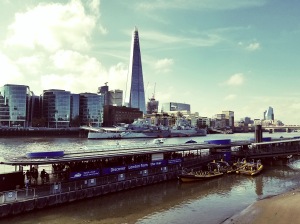 I also always like getting a photo of this area because I love seeing the HMS Belfast all the newness of modern buildings. 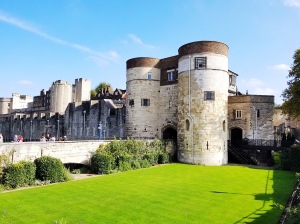 Even the Tower of London looked bright on this sunny day. 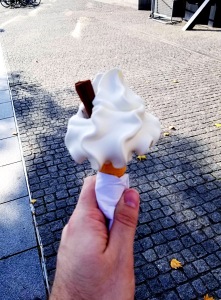 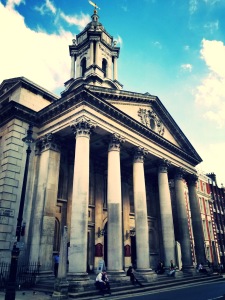 Walking by St. George’s Hanover Square Church. I was hoping to go inside, but it looked like there was a service in progress. 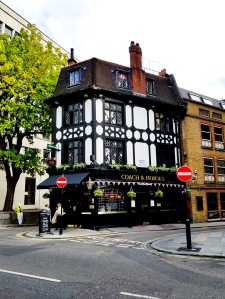 Coach & Horses is a great place to grab a pub lunch or a drink. Or both! 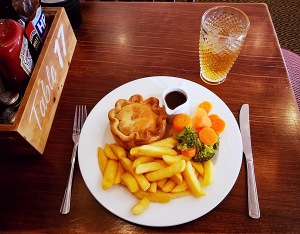 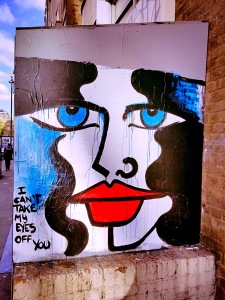 I didn’t see a lot of fun street art on this trip, but I liked this one. 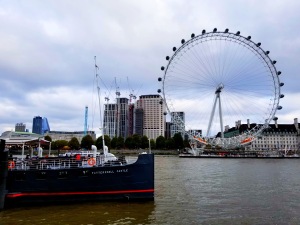 Checking out the Eye on my Embankment walk. 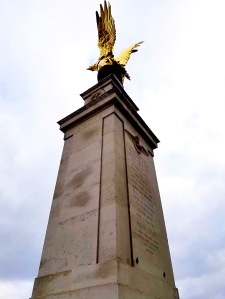 Shiny eagle (I think, right?) next to the Embankment. 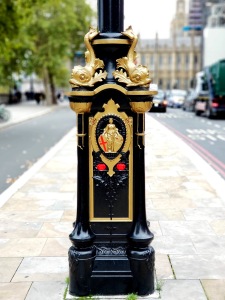 This is the first time I’ve ever really used the selective focus thing on my phone. Came out pretty cool! 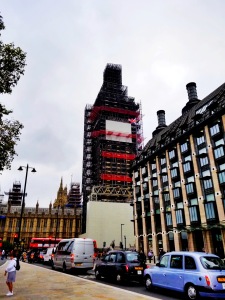 Poor ol’ Big Ben is still wrapped in scaffolding. I think that will be the case for another year or two!

Wandering through the Victoria Embankment Gardens.

I don’t think I’d ever bothered to look up to see this cool skyway between these buildings above Villiers Street before.

After all that fun in the (London) sun, it was time to head back to Lewisham to get packed up and then meet Lisa, but you already know how that went. This trip was so good! Considering the fact that I had very little planned before going to London, I ended up doing lots of new-to-me stuff. You may be wondering if if I’ve seen and done everything in London, but the answer is most definitely no. And even if I had, I would still love London!

Want a couple of bonus photos? 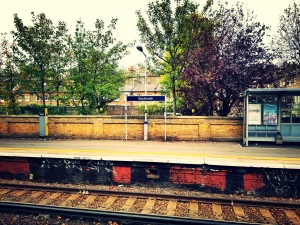 Snapping a photo at Blackheath Station, where I started my journey to the airport. 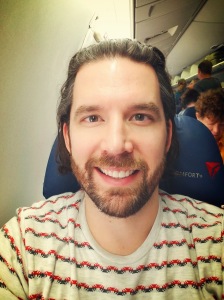 And with that, we’ve reached the end of my latest London trip. I don’t have anything booked to go back, but I have a feeling it won’t be too long before I return. Until then, we return you to your regularly scheduled (meaning, whenever I decide to publish them) Travel Throwback posts.