We’re in a new city! This morning, it was goodbye Belfast and hello Galway (well technically that last part happened this afternoon). Galway isn’t a terribly big place, so when we were making our travel plans, we figured out that taking a bus(es) would be the best way to get here. That involved taking a bus from Belfast to Dublin Airport and then taking another bus from there to Galway. All in all, it was a pretty smooth process! When we booked, we opted to give ourselves a cushion of time by choosing a later bus from Dublin, in case we were delayed, but we didn’t have any issues, so when we scoped out the bus stop there (to make sure we could find it), there was an earlier Galway bus waiting there. I asked the driver if we could get on, getting us on our way over an hour earlier, and he was happy to flip our tickets over. Score! Of course, right as we left the airport (about 20 minutes later), we hit traffic issues due to either a parade or a protest (it looked like a parade, but the driver said it was a protest), so I was afraid we would be pretty delayed, but we weren’t. Big relief! We ended up getting into Galway around 315 PM, which I think was 15-30 minutes later than the bus was supposed to arrive (but still 30-45 minutes before our original bus was due to arrive). So although it took several hours (our bus left Belfast at 930 AM, so just about six hours total), our travel experience was smooth.

Our home-away-from-home on this leg of the journey is the Menlo Park Hotel. Remember how we thought our Belfast hotel was kind of removed from the places we wanted to visit? While that hotel wasn’t, this hotel is, but it’s not terribly far. Walking to the city center takes about 25 minutes, which is an easy stroll for us, though we always have the option of a taxi should we need it (and that’s a real taxi, folks – no Uber here). And because the weather today was PERFECT, we didn’t mind getting the walking time in. And the hotel itself is really nice – the room is big, the bed is comfortable, the bathroom is well-appointed (TBD on water pressure), and the wifi is strong. We’ll see how the breakfast is tomorrow, but based on what I’ve seen, this is my favorite hotel thus far. And actually, that makes it my favorite hotel of the trip because we’re staying in an Airbnb when we head to Dublin for our last few days of the trip.

Every building looks better in the sunshine, doesn’t it? 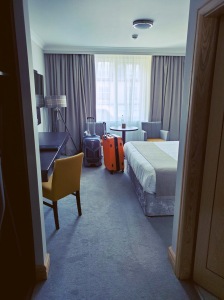 Looking into the room from the door.

The bathroom is really nice, too – looks like it may have been remodeled recently.

As usual, we spent some time getting settled into our room after we arrived. Everyone has their own process when it comes to getting settled, but I learned long ago that it’s nice to actually take stuff out of your suitcase, get the bathroom set up to your liking, etc. We’re going to be here for a few days, after all, so it makes sense to make the space as comfortable as we can. We did want to get out and explore some of the city though, so we made some rough plans. Since Galway isn’t a huge place, our to-visit/do/see list isn’t too long, but because our time here is limited (like Belfast, we have a day-and-a-half here before we take a day-long side trip on Monday), we wanted to make the most of it.  Because most of what we did was walk around and take photos of some well-known sights, I’ll just provide a run-down of what we did and then show off all the photos. Just not as much to write in this post!

Our aforementioned 25(ish)-minute walk led us to our first stop, Galway Cathedral. Strictly speaking, its full name is the Cathedral of Our Lady Assumed into Heaven and St Nicholas, Galway, but that seems like an awful lot to type, so Galway Cathedral it is. Although this church is really imposing and feels really old, I was surprised to discover that, like Belfast Cathedral, this building isn’t very old at all – construction began in 1958 and was completed in 1965, which makes it only 54 years old (as of the time I’m writing this), but it is notable for being the last stone cathedral built in Europe, so that’s something. There’s a lot to see here, from the dark, Galway limestone used in the walls to the uniquely-shaped windows, so I’m glad we stopped in. There’s no entry fee, but there’s a recommend donation of €2/$2.20 USD per person (yes, being in Ireland, we’re using euros rather than pounds now), so I just dropped €5 into the donation box. It’s certainly worth a visit, so check it out!

After the cathedral, we ambled over to Eyre Square, but we didn’t stay long as it didn’t seem like there was much for us there. Instead, we focused on more important things, like dinner. 🙂 Scott found a place called Pasta Factory, which sounds like it could be some kind of over-the-top, chain restaurant that churns out cheap Italian food, but in reality, it’s anything but that. It’s a tiny little place that has a small menu and specializes in fresh, homemade pastas and sauces. It was SO good!! Oddly (and luckily for us, it turned out), they were closed when we arrived (despite their normal opening hours not reflecting that), with a sign posted saying they would re-open at 6 PM. Since it was just a few minutes before the hour, we waited and walked in when they took the sign down. It was a good thing we did because a few of the small number of tables were already being held for reservations and the rest were full within ten minutes of us sitting down. There’s nothing fancy about this place – you just check out the menu on the wall and order at the front. We both had bolognese sauce on our pasta – both that and the pasta were really fresh and flavorful, as were the small slices of cheesy ciabatta bread we got to start. And the prices aren’t bad either! We paid €30/$33 USD for our two meals, plus the cheesy bread and a fizzy San Pellegrino for me. This is absolutely worth visiting, though I recommend either arriving right when they open or booking a table ahead of time. Oh, and try the plates when you go – they’re edible, too!

Full of delicious pasta, we couldn’t pass up the chance for some local ice cream, so we stopped by Murphy’s for some fresh, locally-made ice cream. It was a little pricey (€4.50/$5 USD for a small cup), but very creamy and tasty and the two guys working there were super nice and gave us a little information about where the ice cream is made (Dingle) and some of the unique flavors they offer (Irish bread and gin being two of them).

Well and truly full with ice cream, we walked through the Latin Quarter a bit and found it to be bustling with activity, people, and even an Irish band. It was the perfect evening to be walking around! We may be back that way tomorrow, so perhaps we’ll find some interesting shops to visit. Before heading home, we made one more photo stop, this time at the Spanish Arch. It is an old arch (with another arch, the Caoċ Arch, next to it), but it’s not Spanish and it does date back to the 16th century. It’s right next to the very fast-flowing River Corrib, which made for some nice views on our walk there and back towards the hotel.

With allll that said, now we can get to the rest of the photos. 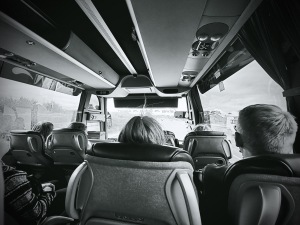 On the road again (before we got to the hotel)… 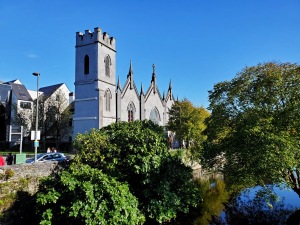 Not sure what this building is part of, but it’s just across the bridge from the cathedral.

It may be hard to see in the photo, but the river was flowing VERY quickly. 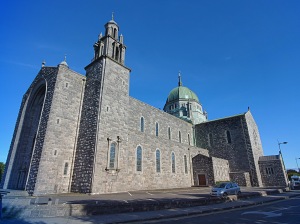 Looking up from the altar – loved the ceiling here!

I also loved the shape of this window. It’s probably not that unusual of a shape in a church, but I thought it was neat. 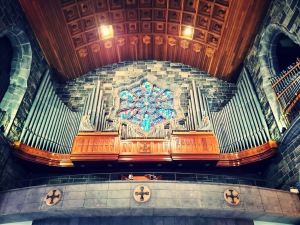 As always, the organ.

Another shot of the area around the altar. 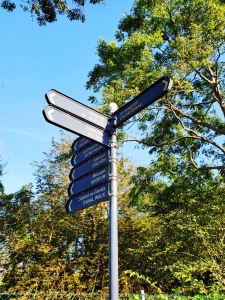 This was the entrance to the house of the Browne family and dates back to 1627.

I told you Pasta Factory was a small place.

Does that look good or what?? We figured the plates must be made of leftovers from the pasta-making process as they tasted kind of like uncooked noodles.

Walking into the Latin Quarter. 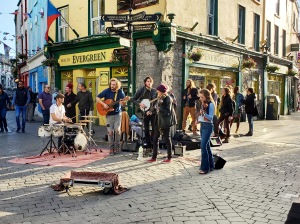 Irish band in the Latin Quarter.

Yeah, those arches sure look…archy. 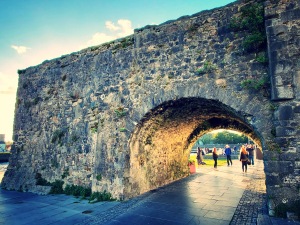 There were fewer people at the back of the arch, so I figured that would make for a better photo.

Yep, that arch is certified old, all right. 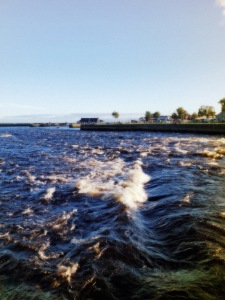 And one more shot of the river. I definitely wouldn’t want to fall into it!

With a nice dinner, a tasty dessert, and a good amount of steps walked, we made our way back to the hotel, where we’ve been relaxing and blog-writing. After having to get up early (like, pre-8 AM early, which is FAR too early for vacation) the last two days, we’re elated to not have anything to wake up for tomorrow (other than for breakfast, but we have until 1030 AM for that).

If you want to read about what we got up to on our other day to explore Galway, click here.

4 thoughts on “Glidin’ Into Galway”

A Lighter Day in Galway