Today turned out to be a bit of a lazy day in Galway and that’s A-OK with me. As I mentioned in my last post, since Galway isn’t very big, we didn’t have a lot of things on our to-do list here and we checked several of them off yesterday. Today was all about getting the other few things checked off, which mostly involved walking around and taking photos again. Here are the sights we hit:

As with yesterday, none of the stops were particularly detailed or notable (in terms of me having a lot to say about them), so this will be another lighter post, with a few details of the sights, followed by a selection of photos (smaller than usual, because lazy day).

Since last night was our first night in the hotel, this morning was our first breakfast here. It was decidedly tasty! Like the Hilton in Belfast, it’s a buffet affair, with lots of tasty goodies, hot and cold, to choose from. This, combined with the other elements of the hotel I mentioned in my last post, cements this hotel as my favorite of the trip. It loses a few points for the less-than-stellar water pressure in the shower, but that’s about it. I definitely recommend Menlo Park Hotel if you’re coming to Galway!

Post-breakfast, our destination was the Salthill Promenade, which is a couple of miles away. We decided we would take a taxi to the end of it (away from the city center) and then walk the 2+ miles back into town, see our sights, and then head back to the hotel. It was a really nice walk, scenery- and distance-wise, though it would have been much nicer in yesterday’s sunshine. When we woke up this morning, there was lots of brilliant sunshine, but by the time we left the hotel after breakfast, it had gotten fairly cloudy and stayed that way the rest of the day. Thankfully, there wasn’t much in terms of rain – a light sprinkle at the beginning and end of our day, but that was it. The clouds and threat of rain (not to mention the ever-present cold of the Atlantic waters) didn’t stop people from swimming though! Both at Blackrock Diving Tower, and at a couple other spots on our walk, we saw a fair number of people in the water, though to be fair, the yelps we heard from a few of them confirmed the water temperature. I’m not really sure how the diving tower came to be so popular, but the current tower (not terribly tall, but you do have to walk up about 20-25 steps to reach the top of it) dates back to the 1940s, though there were other (apparently not very safe) diving structures there previously. Also, until the early 1970s, it was a diving/swimming spot for men only, which doesn’t really make any sense, so I’m glad it’s changed. Another fun fact – it’s tradition to kick the wall near the diving tower at the end of your walk (assuming you’re walking from the city center, you’re meant to walk to the wall, kick it, and then turn back). Even though we started our walk at the wall (rather than ending it there), we still kicked it (see proof below). I enjoyed this walk in the grey weather and I can only see it being even better in sunny weather, with lots of swimmers around and great views over the water. Definitely walk this path when you’re in Galway!

Once we got into the city center, we visited Kirwan’s Lane, which we discovered we had walked by yesterday and completely missed. To be fair, it’s really just a street or two that look particularly well-preserved, though the area actually fell into disrepair for a long time before being revitalized. These days, in addition to having a nice, old-time vibe, it’s also home to several shops. Worth a look, since any visit to Galway will require you to walk right by it anyway.

Next up, we were happy to discover Galway Market running in the little lane right next to St. Nicholas’ so we wandered through it. The market consists of a number of stalls (maybe 20-30) selling locally-made wares, paintings, etc. as well as several selling food. We found a stall selling Indian food, where Scott got a couple of yummy samosas, and we enjoyed looking through the items at some of the other stalls while he ate. If you’re looking for some more interesting, truly local (according to what the vendors said, anyway) items as souvenirs, this market would be an excellent place to look, especially as it’s open every weekend as well as some Fridays in the summer, plus bank holidays. Give it a look!

The one building we actually went into was St. Nicholas’ Collegiate Church. The “collegiate” part doesn’t refer to a school, but rather to the fact that the church is organized around a self-governing body rather than a specific diocese or religious community (nuns, monks, etc.). This particular church dates back over 700 years, which is neat in and of itself! It’s not particularly large (so it doesn’t take long to wander through) nor does it have an entry fee (though feel free to use the donation box, as they depend on it to maintain the building), so make a point to add it to your next Galway itinerary.

Our last stop, ever so briefly, was Lynch’s Castle. This is another location we breezed by yesterday without taking notice, but once you’re in the city center, everything is really near everything else, so it was very easy to stop and look at it today. It’s not a castle, per se, but rather a fortified house, originally built by a wealthy family in the 16th century, which is cool, but today it’s…a bank. Not exactly glamorous, but at least the building still has a purpose! When the bank is open, you’re free to walk inside to see the ground floor and learn a little about its history, but we sadly aren’t able to do that on this trip since Saturdays and Sundays aren’t prime bank-opening times. Even though I don’t think we would have seen much, I would like to have gone inside, so don’t follow in our footsteps and make sure you visit on a weekday!

We didn’t see anyone jump from the diving tower, but you can see several swimmers in the water around it.

A photo of the beach right by the diving tower. Note the older couple walking out of the (surely very cold) water on the left. They didn’t seem phased by it at all! 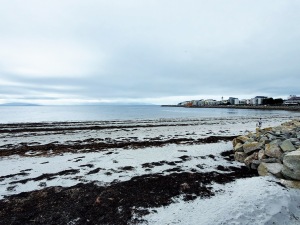 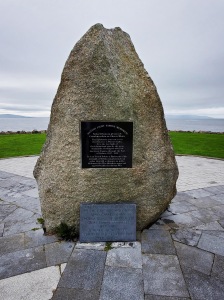 A memorial stone dedicated to ship captains and crews who helped people escape Ireland during the Great Famine of the mid-19th century. 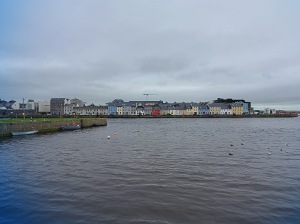 Looking mostly towards the city center at the end of our promenade walk.

This seemed like an appropriate photo to take on Kirwan’s Lane.

Galway Market, with St. Nicholas’ in the background. 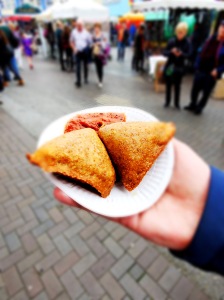 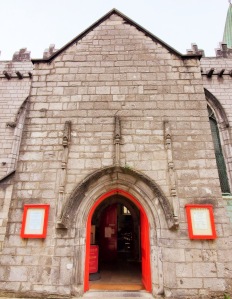 Not a huge building, but interesting nonetheless. 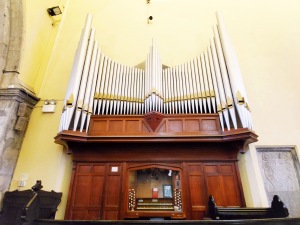 As if I wouldn’t take a photo of the organ.

Although we had only been out and about for a few hours, we packed it in after Lynch’s Castle, having seen the things on our list (it also started to rain a bit more just then, so that gave us a nudge in that direction). We made the rest of the day a lazy one (hey, we get to do that on vacation once in awhile, right) by relaxing in our room, writing this blog (always a priority), and contemplating naps (though none were taken). We did rally ourselves to go to dinner, but we didn’t have far too walk as we opted to eat in the hotel bar after looking at the menu in our room. We went for some US-leaning fare and got some pizza and wings (plus a salad for Scott) and it was all really tasty. Kind of surprising for hotel food!

I think by the time tomorrow rolls around, we’ll be thankful for the lighter day today. We’re heading out on another all-day side trip to the Cliffs of Moher, which will undoubtedly be great, but which also requires us to be up early (745 AM, so not TOO early) and be gone all day. The sunny weather forecast turned out to be accurate, so click here to read about our great day at the cliffs.