This weekend, I did something I’ve never done as an adult before – I went on a trip with my brothers! Obviously I traveled with them (and other family) when I was much younger, but we’ve never had the occasion to do so as adults.

So how did this happen? Well, I have three brothers (all older, thank you very much :D) and the next one up from me (that’s Dan) had an idea about six weeks ago – he thought we should all go to an amusement park together, specifically Cedar Point in Sandusky, Ohio. This sort of came out of the blue, which isn’t a bad thing, but Cedar Point isn’t super accessible as it’s an hour from any airport and it’s more than ten hours to drive there for three of us (oh yeah, we’re all coming from our homes, which are in four different states). As we talked through logistics and timing, our options were limited because of the difficulty in getting all four of us there and because amusement parks either close entirely after Labor Day or are open on much more restricted hours, so we had to go by the end of August. On top of that, me and brother #2 (that’s Chris) already had separate travel plans in September (not together, but around the same time), so we only had the month of August to work in. Cedar Point just wasn’t going to happen, but I was talking to Scott about it and he had a brilliant idea…

Six Flags Great America is about an hour north of Chicago, making the drive time 7.5 hours for brothers #1 and #2, less than two hours for brother #3, and 5.5 hours for me – totally doable! When I asked the brothers about it, it turns out no one was married to Cedar Point for this trip, so we all agreed on Six Flags. Coming from St. Paul, Dan would actually be on the way for me as I would have to pretty much pass his place in Wisconsin on the way and Brian (who lives about two hours south of Chris) was willing to drive to Chris first so they could make the drive together. Once we realized all that, we found a weekend that worked and the ball was rolling. I found a decent hotel really near the park and also found discounted entry tickets, so things were set for my first trip to an amusement park in…many years. I honestly don’t remember the last time I went to one, other than knowing that I for sure went to a local one (Valleyfair) about 12 years ago. All four of us grew up going to local (midwest) parks like Adventureland and Worlds of Fun, so this trip was bound to be a little nostalgic!

As the weekend approached, we were all getting excited to get there and were making plans to not only go to the park, but also to play some mini-golf and some favorite games in the hotel (cribbage, Phase 10, and Mario Party). Everything was on track, but sadly, Dan had to drop out at the last-minute due to illness. It was a real bummer since the four of us had never done this before, but what can you do, right? He stayed in touch with us via text, so he still got to experience the trip to some extent! And he is still set on us going to Cedar Point at some point, maybe in the spring, so hopefully we’ll successfully remount this experience with all four of us in the future.

So how was the actual trip? It was a lot of fun! Anyone who knows me knows how much I HATE hot weather (especially humidity), so I was nervous when we planned this as I didn’t want to have to spend the better part of two days in hot, blistering sun. Thankfully, the weather gods shined their favor (rather than their heat) upon us as they gave us sunny, but not hot or humid weather for both Friday afternoon and all of Saturday. Perfect for being outside!

I was the first to the hotel, so I got settled and waited for Brian and Chris to arrive, which happened about two hours later. We didn’t have anything definite planned, but Brian and I played some cribbage for awhile (though unlike the weather gods, the card gods screwed me over, so I lost both games). We had hopes of playing Mario Party as well, but we couldn’t get Brian’s Wii (yes, a Wii!) hooked up to the hotel’s TV at first. When we were on our way out for dinner, we stopped at the front desk and then sent someone to our room who got it figured out for us – woo! Speaking of dinner, we didn’t have plans, but we ended up at Anastasia’s, right around the corner from our hotel. It’s a kind of casual, sports bar-type place, with good food and really good prices. My big ol’ meatball sandwich and fries was only $6.99! Nothing fancy about the food, but it hit the spot and I would go back if I was in the area again.

After that satisfying meal, we migrated to Lighthouse Mini-Golf for a fun 18 holes. Mini-golf is something else I hadn’t done in many years (but have always really enjoyed), so it was fun to get out and do it again. I’m not particularly good at it, but I always have a lot of fun trying my best to putt those balls in. And I even got a hole-in-one! I didn’t win the round, but I came in second, so I was happy about that. And afterwards, we were able to play Mario Party successfully! It was a nice way to wrap up our first half-day together, though I was definitely ready for bed that night.

The living room area of our suite at the Springhill Suites in Gurnee, IL. 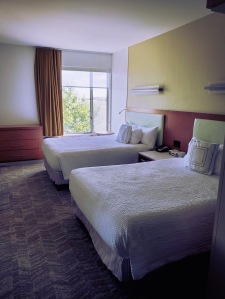 A suite with two beds (plus the pull-out in the living room) was a must-have!

The room was kind of odd in that it had two bathrooms – one with a toilet and sink and another with a sink and shower. Kind of nice to have them split up though. 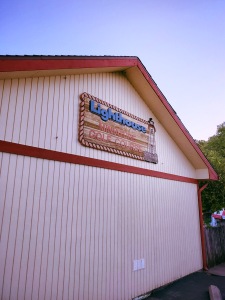 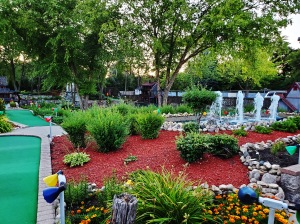 The course felt a little run-down, but it was pretty and had some good holes!

Chris trying to sink a putt.

Trying for that hole-in-one! 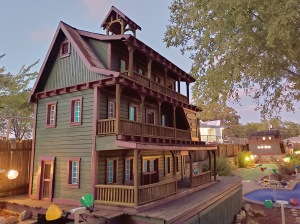 Almost to the end of the course.

Another putt, coming through!

Brian highlighting the 18th hole. If you sink it into the hole in the middle, you get a free game!

And of course, Chris and his RIDICULOUS SLOPPY LUCK ended up sinking it into the middle hole and getting a free game (and a hole-in-one).

Saturday was, unsurprisingly, all about Six Flags. When we started making plans, we talked about getting to the park as early as possible, but didn’t really pick a specific time. We didn’t realize until Friday that it didn’t open until 1030a, so not very early at all! On one hand, that was nice because we didn’t have to wake up early (and it also gave us time to sneak in a game of Phase 10, which Chris of course won), but on the other hand, 1030a isn’t really early for anyone, so I was a little worried that the park would be super crowded from the jump. Thankfully, that concern proved to be unfounded as it wasn’t super crowded the whole day and the waits weren’t terrible, with the exception of the Superman ride, where we had to wait a little over 90 minutes. That’s definitely longer than I wanted to wait for any one ride, but because it’s sort of a signature ride (and it was also our last ride of the day), we were all okay with it.

How’s about those coasters??? Here’s a list of what we went on, as well as my thoughts on them:

Check out my photos below! 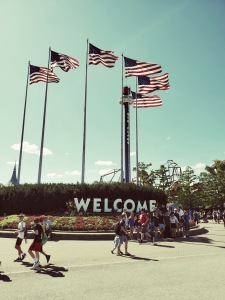 Walking into the park! Let’s see…yep, there are six flags there! 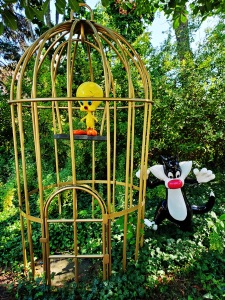 Looney Tunes characters like Sylvester and Tweety are dotted throughout the park.

Advertising for their Halloween-themed Fright Fest. 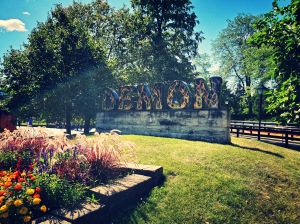 It was hard to get a picture of the actual Demon coaster, so I had to settle for the sign instead. 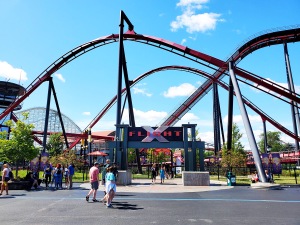 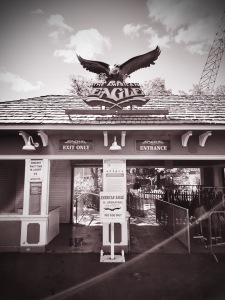 The entrance to American Eagle (no, not the clothing store).

Trying to show the scale of American Eagle.

Waiting to get in The Dark Knight Coaster.

The Joker is easy to get in a photo because it’s not that big or long, but it was fun!

This one is pretty self-explanatory.

The Batmobile parked outside the ride. 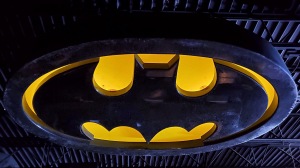 A photo of the Batman insignia on the ceiling just before getting on.

The entrance to my favorite ride of the day, Goliath!

I had to get another photo from further away to capture the awesomeness of Goliath.

We were going to go on Justice League: Battle for Metropolis, but it wasn’t working. Boo! 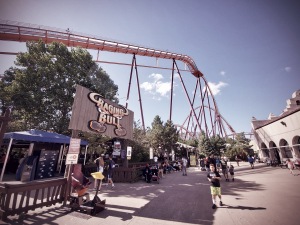 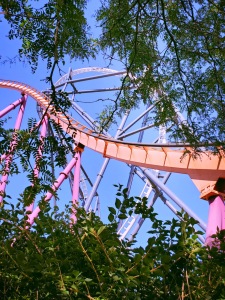 Part of Raging Bull, but I was actually going for a shot of Maxx Force behind it. It’s a new coaster that looked great, but had a long wait, so we didn’t get time to go on it. 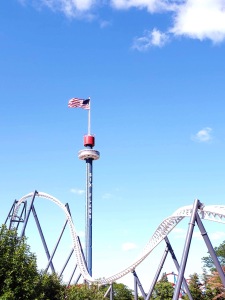 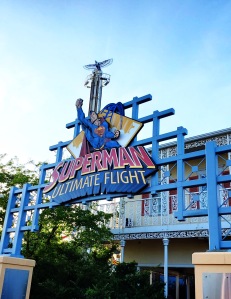 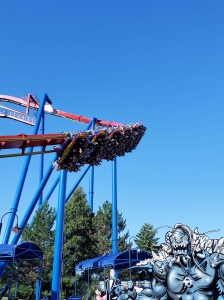 After a whole day on our feet, no food (not deliberately, but we just didn’t get around to eating), and almost 20,000 steps, we figured we would stay on our feet and squeeze in another round of mini-golf. Why not, right? This time we went to Aloha Falls, which Chris had found online, but it’s only open on weekends, so Saturday was the only chance we could go. This course was definitely newer and in better shape than Lighthouse, but it was more challenging for sure. We still had fun, even if I did come in last place (despite winning the back nine!).

Only a few pics from this last adventure as I was getting tired. 🙂 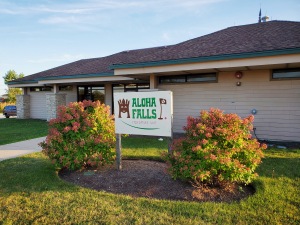 Heading into Aloha Falls, which has a neat little free arcade inside that includes a several game systems hooked up on multiple TVs, a pool table, a few other games. Pretty neat!

Brian lining up his putt. 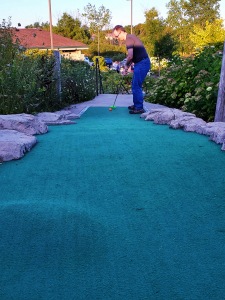 Time for Chris to putt.

Another waterfall! Kind of a mini-golf must-have.

This course had several longer holes like this and the low rocks on the side meant that we all had some trouble staying on the greens.

After mini-golf, we were pretty spent and VERY hungry, so it was time for some dinner. We again opted for something easy and just went to the Chili’s near the hotel. Yes, it’s chain-restaurant food, but it was tasty and hit the spot, so we were happy. Brian and Chris wanted to fit in one last round of Mario Party when we got back, so I obliged. I was definitely ready for bed after that though!

Sunday morning came soon (we’re all early risers) and we were up and out of the hotel before 830a (Brian and Chris left a little earlier than that because they had a longer drive). The drive home was uneventful for me (and apparently for my brothers as well) and I made it home before 2p and have been relaxing ever since. Overall, it was a really fun weekend! It was fun to travel with 2/3 of my brothers and to visit an amusement park again. Looking forward to the next trip with all four of us!

3 thoughts on “We Are Family! AKA, Traveling With My Brothers”