Another morning, another post! That seems to be the way this trip is going so far, anyway. 🙂 I’m happy to report that I’m sat in the hotel lounge/breakfast area as I write this, with sun shining through the windows once again. The weather has really cooperated nicely these first two days, though I did have to deal with a bit of rain yesterday, but not until the evening, and it was more sprinkles than anything else. The forecast is calling for some rain today as well, but I’m certain I won’t melt. Well, pretty certain!

Along with the weather (not always sunny, but nice temperatures to go with the lack of rain), yesterday was a fun day in the city with my friend Matt. Although we didn’t have anything planned, I knew we’d figure something out, likely starting with lunch, and that’s exactly what happened! As you may recall, Matt lives in Brighton, so he caught the train to London and we met at Victoria, which is really convenient to my hotel (sidebar, but I was just thinking yesterday how I think I like the location of this hub even more than I liked the Westminster Abbey branch I stayed in last year). We managed to time things out pretty perfectly, with me arriving at the station just a few minutes after his train pulled in, so we met up and quickly devised a game plan.

Well, I say “game plan” but I actually just mean that we decided to go to lunch. With nowhere particular in mind, but thinking a good pub lunch sounded tasty, we walked around the area near the station and quickly found Bag O’ Nails which, in addition to having a fabulous name, looked like a good ol’ pub to lunch in. And good it was! To be fair, many pubs are owned by one of a couple of large chains (Greene King, in this case), but the food was still tasty and the ambiance was nice. As food is never a huge focus in my travels, I’m usually happy to take others’ recommendations or just wander into places that look neat. We had a great time catching up over lunch and also decided on our first destination of the day – Petrie Museum of Egyptian Archaeology.

My friend Felicity was recently in London and she went to the Petrie and said it was worth a visit. As I’ve said before, I’m not exactly a connoisseur of museums, but I do go to them somewhat regularly when traveling as they often have important information about the area or have some must-see exhibits (I’m looking at you, Louvre/Mona Lisa). This museum is actually quite small and is part of University College London, so it felt a bit like we were walking around a college campus as we approached it (which I suppose we were, as the student union is just outside the museum). Also, entry to this museum is FREE – bonus! While I’m not an expert at anything to do with Egyptian archaeology, I thought it would be fun to see see some treasures from thousands of years ago and indeed it was! The person working the desk when we arrived was super helpful and explained the layout and gave us a handout of the must-see items in the collection, which I always appreciate. I’ve seen that in large museums before (the Louvre, for example – you could spend DAYS in that place, so the must-see list was really helpful), but not usually in small ones, so that was a nice touch. Although I can’t really recommend any particular things to see in this museum, I can say they’re all good! And it’s free and easy to get to (tube station literally around the corner), so you should definitely put it on your list.

Walking into the museum. 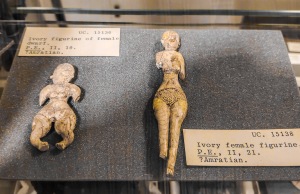 For some reason, I really liked these tiny little carved figures and the little labels with them.

I thought these eyes were particularly notable. 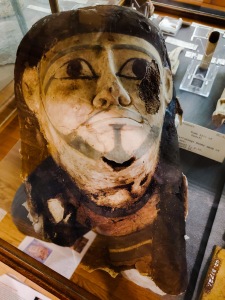 This is a mummy portrait, dating from the time when Egypt was ruled by Rome. 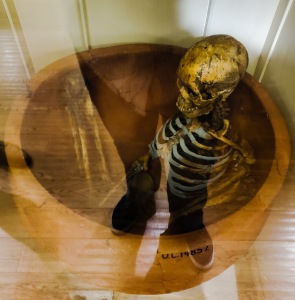 A skeleton in a pot – part of a typical pot burial. 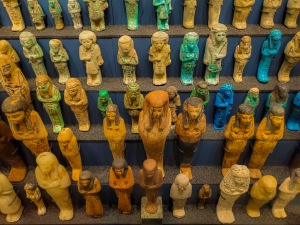 These are shabti, which were buried in tombs to be servants of the deceased in the afterlife. Those blues are amazing!

A bead net dress that is thought to date back to 2400 BC.

An astrolabe which, according to the note next to it, was likely used for educational, rather than practical, purposes. 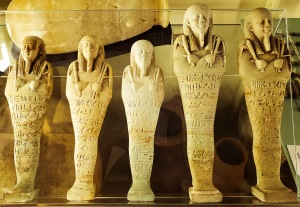 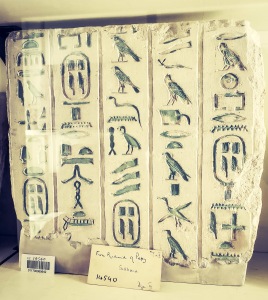 A pyramid text from the pyramid of Pepy I. 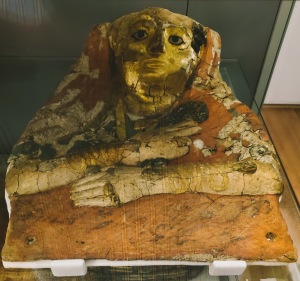 I felt some real side-eye from this one. 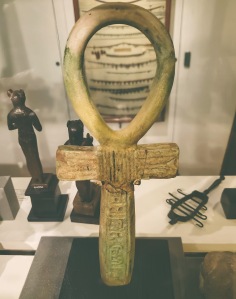 An ankh inscribed with the name of King Aspelta.

Not part of the museum, but I loved the way the leaves looked on the student union building (just outside the museum).

After that little gem of a museum, we were hoping lighting would strike twice as we moved on to our next destination, the Museum of Brands. I have Felicity to thank once again, not because she visited this one, but because she sent me a YouTube video of off-the-beaten path places to visit in London and this was one of them. To be honest, it didn’t strike me much at first, but when Matt and I talked about it, he was interested, so we caught the tube to Notting Hill and gave it a go. I’m happy to report that it was another really interesting museum! Although much more relevant for folks from the UK (since it’s about brands and packaging from here, rather than worldwide), I still found it really interesting. It’s set up as a walkable timeline, starting with the Victorian era and leading up to the present day, giving visitors the chance to experience packaging, advertising, and more from across the decades. Matt was pretty enthralled with it and is already planning on bringing his family sometime soon! Of course, I did recognize a number of brands, so I wasn’t totally in the dark, but it was really interesting to watch Matt recognize things from his childhood and from his family (like the hand-cranked washing machine, which he said his grandmother used until the 1980s). There’s even some Doctor Who stuff there (toys and other marketing/advertising stuff), so that was a pleasant surprise. The founder, Robert Opie, was in the museum when we were there (maybe he’s always there!), but as it wasn’t busy (no one else was walking through at the time we were), he spent a lot of time talking about the museum and his passion for brands and packaging. Many of the items in the museum are things he saved from when they were first released/sold/advertised – super cool! There was SO much interesting stuff to be seen there and I wish I could have taken photos of it, but sadly, it’s a no-photography-allowed museum, so I couldn’t. But this is absolutely a museum that should be on your list! It’s not a free one, but at only £9/$10 USD, it’s very affordable.

Just one photo of the exterior, I’m afraid! But it’s very colorful, isn’t it?

By the time we finished in the museum (and had a little snack in their cafe), it was early evening, so we decided to grab a drink, followed by dinner. Being both after work and a Friday night, all the pubs were pretty busy, including my perennial favorite Retro Bar, but we still stopped to have a drink. The cramped quarters inside made it pretty warm in there, so we decided to imbibe outside (where all the smokers are, which was a slight drag). This is when the little bit of rain had started, but Retro Bar has a nice overhang, so we didn’t get wet. And we also had a nice conversation with a couple of guys standing next to us, one of whom happened to have spent three years living in Iowa! We had a nice conversation about Midwest attitudes/ideals, politics (US and UK), and more – a nice, random chat!

Dinner followed (at where else, Pizza Express!) and then we stopped in for one last quick drink at Halfway II Heaven, a gay bar that has apparently been around for many years (on the backside of Pizza Express), but which I have COMPLETELY missed every time I’ve been here! I noticed it when I was out and about on Thursday and Matt said it was the first gay bar he ever went to, but hadn’t been in ages, so it felt like a good time to stop in. It was also kind of crowded, largely because a drag show started shortly after we arrived. We stayed for the first ten minutes or so as we finished our drinks, but then we wrapped up the night and headed back towards my hotel, where I crashed while he headed back to Brighton via Victoria. I was actually up quite late last night – until almost midnight! And thankfully I had a solid night of sleep, waking around 615a, NOT getting up, then going back to sleep until around 830a. Bliss! It’s late morning now and Matt is on his way from Brighton as we’ll be going to show this afternoon and seeing what else we can get up to. You still have to check back for the next post to read about the show though! 🙂