Well, well, well – we meet again, London! Is anyone surprised that I’m squeezing in another trip to my favorite city before the end of the year? If so, you shouldn’t be! Would I shrivel up and die if I didn’t pay London a visit in a calendar year? Medical professionals would tell you no, but I just don’t want to risk it, so here I am. 🙂

I’m writing this on Friday morning, after having landed a little over 24 hours ago. If you read my most recent post, you saw that I was able to snag a business class seat on Delta One for my direct flight here and it was really nice! Of course it’s amazing to have the space to stretch out and lay down, though I still didn’t really sleep much, if at all. I was pleasantly surprised when I checked the time during the flight because, even though I felt like I wasn’t sleeping, the time on the flight passed quickly, so maybe I was getting more sleep than I thought I was. While the comfortable seat was great, I must confess the menu on this particular flight was not catered to my taste, so I didn’t enjoy it much. Let’s be clear – airplane food is always going to be…airplane food, but you can generally get a tasty meal in business class, but with things like goat cheese, truffle, and mushrooms, it was never going to be an amazing meal to me. Objectively, I can say that’s a subjective reaction as those happen to be things I just don’t care for, but also objectively, the rock hard edge of the tortellini that came with my chicken (sans mushrooms, hence why I chose it) would definitely not have been tasty or enjoyable for anyone. But hey, it’s just food and it didn’t diminish my enjoyment of the flight overall. It was a different experience flying much earlier than I normally do though. The direct flight from Minneapolis to London always used to leave around 930-10p and would arrive around 12-1p the next day, which is pretty ideal because you would fly through what your body thinks is nighttime anyway and then land in the middle of the day. Even if, like me, you weren’t rested when you arrived, you only had to keep yourself awake for a half-day before reaching your (new) normal bedtime. This time though, we left early evening (we took off just about on time at 6p) and landed around 740a (though we had to sit and wait for our gate for about 20 minutes), so I had to keep myself awake for a full day to make sure I got on the right schedule. Ugh!

So how did I spend that first day? I’m glad you asked! Whenever I travel here alone, I take the Underground into the city and this trip was no different. I realize I could get into the city much more quickly using the Heathrow Express, but I’m honestly not bothered by that, especially when I knew I needed to get to my hotel as late as possible to maximize my chance of getting a room early (since I would be arriving well before check-in time either way). I could have Ubered, but Google Maps told me that would have taken more time than the train (because it was peak commuting time) and would have been way more expensive. The great thing about taking the tube from Heathrow is that you’re guaranteed to find a seat since you’re at the start of that particular line and you’re also guaranteed to get some great people-watching in as the train gets more and more full (if you’re at all uncomfortable with crowds and the tight spaces they create, you may want to think carefully before using this option because you’ll be packed in tight!). The journey is just a little over an hour and was very straightforward – stay on the same train until I hit Leicester Square and then switch to the Northern line for just a couple of stops to Goodge Street. Why Goodge Street, you may ask? That station is almost (but not quite) spitting distance to my home-away-from-home on this trip, the hub by Premier Inn Goodge Street. After having such a great experience at the Westminster Abbey branch during my January 2018 London trip and another one with Scott in Edinburgh in September, I was happy to stay at another of their hotels! Although I wasn’t able to snag the same kind of amazing deal I got on that January trip, I still got an awesome price (less than $600 total for six nights, including breakfast) at this one and it seems like it’s just as good as the other two! The room is almost identical to the one I had at the Westminster Abbey (though flipped the other way around) and has the same amenities and comfort level. Seems like it will be perfect for me!

Unsurprisingly, my room wasn’t ready when I arrived at the hotel around 10a, so I dropped my luggage and went out to walk around in the bright sunshine (take THAT, weather forecast!) to soak in the London vibes and nice temperatures. I really didn’t have any plans, except for a stop at TKTS in Leicester Square to pick up tickets for a show I’m going to with my friend Matt tomorrow (you’ll have to come back to read that day’s post to find out which one!). I was very happy to find how walkable my hotel’s location is as I was able to get to Leicester Square in a little under 20 minutes and one of my favorite spots in the city, Trafalgar Square, is just a couple minutes’ walk from there. Yes, I could take the tube more, but as constant readers of this blog know, I love to walk around London! So walk I did. 🙂 I’m SO glad the weather cooperated (it was fabulous all day and is behaving so far this morning as well) as it would have been much harder to keep myself awake if I hadn’t been able to walk around. I ended up wandering around for the better part of two hours before heading back to my hotel, with fingers crossed that my room would be ready. I had been texting with a friend of mine while I was walking and he happened to be in the area near my hotel, so we decided to meet there and have a catch-up. That worked out perfectly because my room wasn’t ready when I got back, but we had a nice chat while we waited for it and by the time he had to go, the room was ready and I could FINALLY take my much-needed shower. Hooray!

As always, I felt magical and human again after taking a shower and getting settled in my tiny-home-like (but still comfortable!) room. I probably should have planned for something to do in the afternoon, but as I didn’t (to be fair, I did spend some time looking into some off-the-beaten path museums, but nothing jumped out at me), I decided to grab a late lunch and do some more walking (I definitely got my steps in yesterday!). Honestly, there was nothing notable to call out in my wanderings, with the exception of perhaps my stop at The Fitzroy Tavern in the early evening. It’s the home of a monthly gathering of Doctor Who fans and, until this trip, I’ve never managed to be there on the first Thursday of the month when they meet, so I stopped by as I had been texting with a friend of mine from Iowa (she’s lived here for many years now) and was hoping to see her there. Alas, our paths didn’t cross as I think I may have been there too early. Because it was after-work hours, it was really crowded, but I did a few circuits of the building and never saw her (or any other Who fans). But I still enjoyed a nice drink, so it was a good way to wrap up the night!

No blog post of mine is complete without photos. Many of these will look familiar to regular readers – I like revisiting my favorite views. 🙂 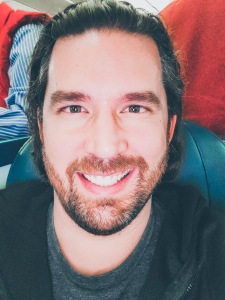 Getting ready to fly! 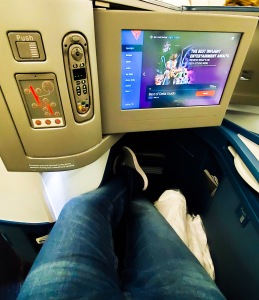 May as well stretch my legs, eh? 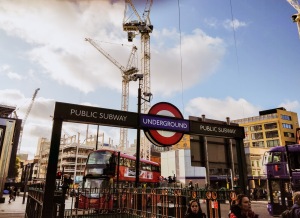 Starting early with the pictures of Underground signs, this time outside Tottenham Court Road. 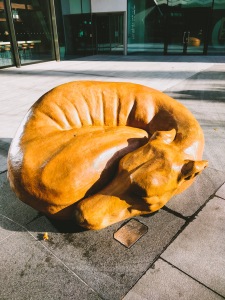 This was outside a building near Tottenham Court Road and it reminded me of my dearly departed greyhound Beaker. 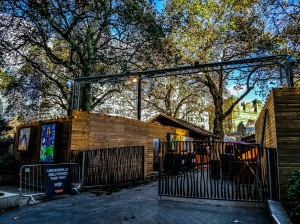 More changes to Leicester Square! They’ve built some kind of Christmas market, but it wasn’t open yet. It opens today though, so I think I’ll walk through at some point! 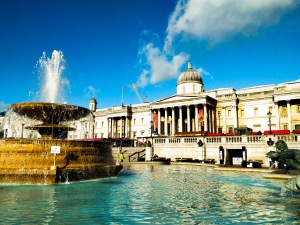 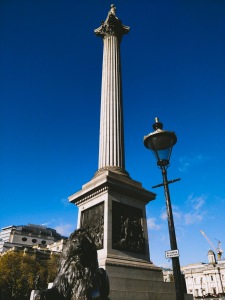 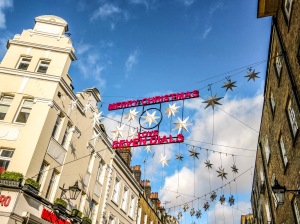 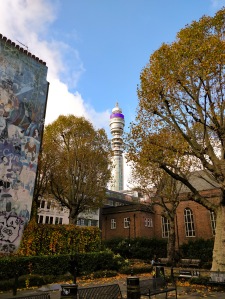 The BT Tower (or WOTAN, if you’re a Doctor Who fan). It’s very close to my hotel, so I snapped this as I walked back to check on my room. 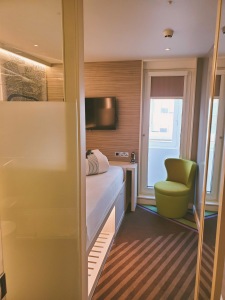 Speaking of my room, here it is! 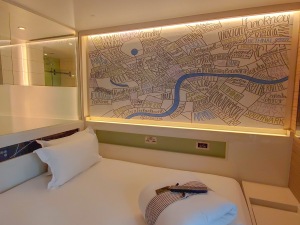 Can you spot Goodge Street in the map? 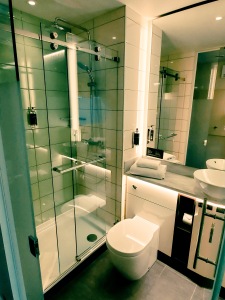 The bathroom is identical to the other two hub hotels I’ve stayed in. 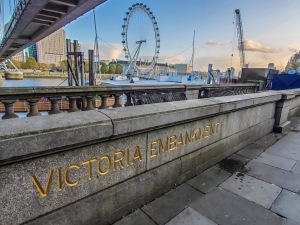 Walking around some more, post-shower and settle-in time at the hotel. 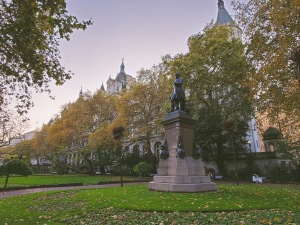 Walking through the gardens. 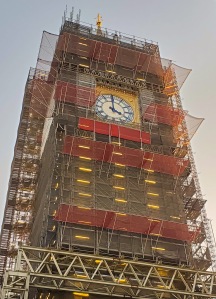 Hey, Ben has a face again! 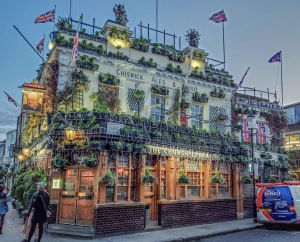 A last-minute decision to stop at The Churchill Arms. I’d never been before! 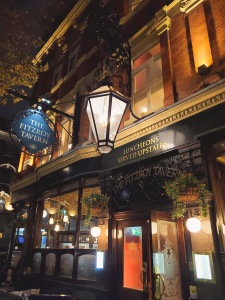 Outside The Fitzroy Tavern.

I made it through my first day without falling asleep on my feet! Go me. 🙂 I ended up officially going to bed around 830-845p and didn’t get up until 8a today – woo! I’m at the tail-end of a cold right now, so I didn’t sleep through the whole night (thanks coughing), but a little NyQuil went a long way to keeping me in la-la land.

It’s mid-morning on Friday now and my friend Matt is en route here from Brighton now (he’ll be here to hang out today and tomorrow), so looking forward to seeing him and hopefully more good weather!